Pope Francis’ expressions of closeness with the Iraqi people 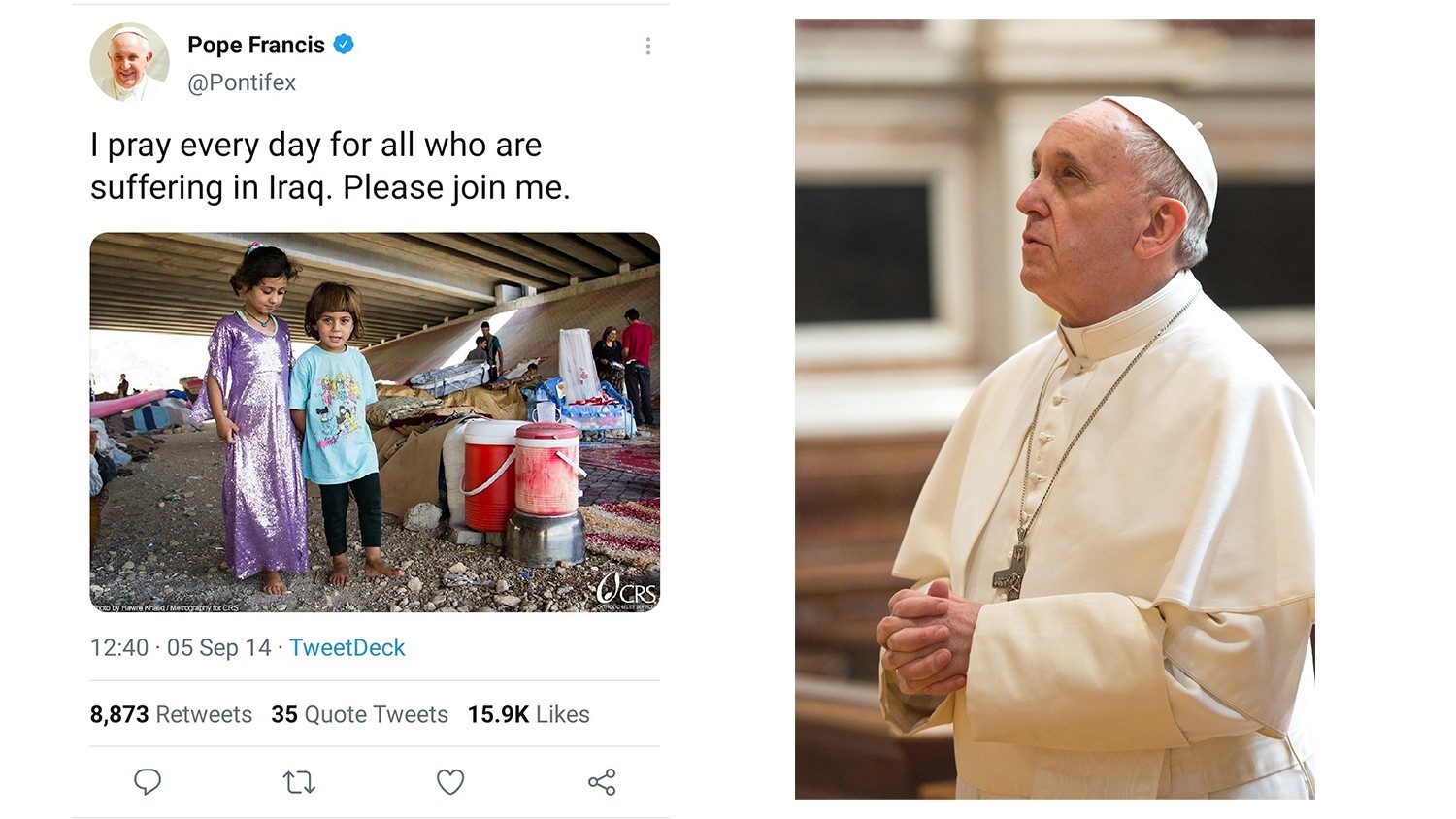 At the end of Wednesday’s General Audience on March 3rd, Pope Francis spoke about his upcoming “three-day pilgrimage” to Iraq. “For a long time”, he said, “I have wanted to meet those people who have suffered so much, to meet that martyred Church in the land of Abraham.”

We chronicle how Pope Francis has manifested his continuing concern for Iraq and its people and his closeness to them through his Twitter account and Angelus appeals.

‘I know how much you suffer’

Pope Francis has often spoken directly to the people of Iraq. In an appeal after the recitation of the Angelus on 20 July, 2014, he spoke about the persecution Iraqis were suffering after having lived and offered a “meaningful contribution to the good of society.” Today, he said, “they are pushed out, forced to leave their homes without the opportunity to take anything with them. To these families and to these people I would like to express my closeness and my steadfast prayer.”

“Dearest brothers and sisters so persecuted, I know how much you suffer, I know that you are deprived of everything. I am with you in your faith in Him who conquered evil!”

A week later, he again mentioned Iraq, along with the Middle East and Ukraine. He asked for continued prayers so that peace could become a reality through “the tenacity of dialogue and negotiation and with the power of reconciliation.” Then he made an impassioned appeal for an end to all war:

‘The better to ensure those dear people of my closeness’

In September, 2014, Pope Francis sent out the first Tweet accompanied by a photo, pleading that everyone join him in prayer for “all who are suffering in Iraq.”

From then through August 2014, the Pope’s Twitter account, @Pontifex, featured numerous tweets demonstrating Pope Francis’s solidarity with the people of Iraq. One of the most touching is the Tweet on 15 August: “My heart bleeds especially when I think of the children in Iraq.”

That same month, after receiving the Angelus on 10 August with the faithful present in St Peter’s Square, Pope Francis described the horrors being inflicted on people living in Iraq:

“The news from Iraq leaves us incredulous and alarmed: thousands of people, many Christians among them, are being driven from their homes in a brutal way; children are dying of thirst and hunger while fleeing; women abducted; people massacred; every type of violence; destruction everywhere; destruction of houses, of religious, historic and cultural heritage. Yet all of this grievously offends God and grievously offends humanity. Hatred is not borne in the name of God! War is not waged in the name of God! All of us, thinking about this situation, about these people, let us be silent now and pray.”

He then made public that he was dispatching a Personal Envoy, Cardinal Fernando Filoni, “the better to ensure to those dear peoples of my closeness.”

‘I am very, very close to you with all my heart’

Later that same year, on 24 December he personally called a priest providing services to refugees in the Ankawa Refugee Center. Via telephone, the Pope said he was “close to them with all of his heart” and assured them of his prayers.

He ended the conversation, saying, “I am very, very close to you with all of my heart. May the Lord caress you with His tenderness.”

‘I assure those suffering that we will not forget them’

“Dramatic news of violence, kidnapping and harassment aimed at Christians and other groups continues to arrive from…Iraq,” Pope Francis said after the Angelus on 1 March 2015. “I want to assure those suffering in these situations that we will not forget them, we are close to them and we are praying that a stop be put to this intolerable violence of which they are victims.” The Pope then said that this was the intention of a Mass that he offered together with members of the Roman Curia during their Spiritual Exercises at the beginning of Lent.

‘I am close to the entire population of Iraq’

Two years later, on 23 October 2016, Pope Francis once again drew the world’s attention to what was happening in Iraq after praying the Angelus with those gathered in St Peter’s Square.

“In these dramatic hours, I am close to the entire population of Iraq, particularly those in the city of Mosul. Our spirits are shaken by the brutal acts of violence that for too long have been committed against innocent civilians, be they Muslims, be they Christians, be they members of other ethnicities and religions. I was distressed by the news of the numerous sons of that beloved land, among them even many children, killed in cold blood. This cruelty makes us weep, leaving us speechless. These words of solidarity are accompanied by the assurance of my remembrance in prayer, that Iraq, so harshly afflicted, may be strong and steadfast in the hope of being able to go toward a future of security, reconciliation and peace. For this I ask all of you to join in my prayer, in silence.”

‘I have learned with sorrow’

Once again, in December 2019, Pope Francis expresses his personal sorrow at what the Iraqi people experience. “I have learned with sorrow that the protest demonstrations of recent days have met with a vehement reaction, claiming dozens of victims. I pray for the deceased and for the wounded; I am close to their families and the entire Iraqi population, invoking God for peace and harmony.”

Share on FacebookShare on TwitterShare on PinterestShare on EmailShare on LinkedIn
Pope to Iraqi clergy, religious: Violence and hate are incompatible with religionMore than 90% of Poles identify as Catholics despite increasing secularization