You’re meant to be an eagle, not a chicken: A reflection on Baptism 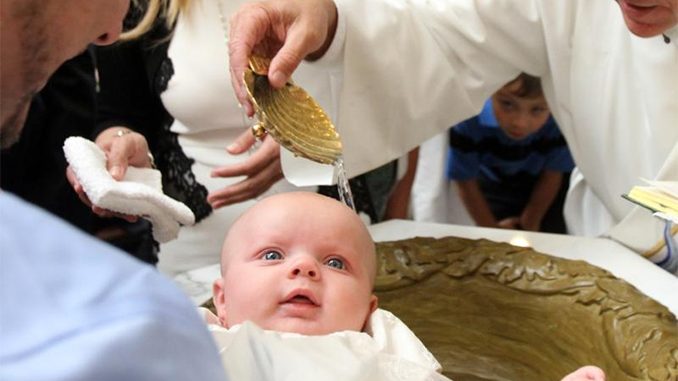 When I was doing full-time parish ministry, one of my favorite activities was performing Baptisms. I put the word in the plural, for I hardly ever baptized one baby at a time, but usually ten or a dozen. Typically, the quite large group of family and friends would gather in the first several pews of St. Paul of the Cross Church about 2 o’clock on a Sunday afternoon, I would welcome them and do a very short description of what was about to happen, and then the happy cacophony of twelve babies crying at once would inevitably commence. I would shout my way through the prayers and the Baptisms—and a general joyfulness would obtain.

Now that I’m a bishop, I have less occasion to baptize, and I do miss it. But an exception took place last week when I was delighted to welcome into the Church Hazel Rose Cummins, the daughter of Doug Cummins and his wife Erica. Doug is our Associate Producer for Word on Fire in Santa Barbara.

I would like to share with all of you what I preached to the group gathered outside (it’s COVID time) of San Roque Church in Santa Barbara for the ceremony. I asked them if they had heard the story of Fr. Matthew Hood, a priest of the Detroit Archdiocese, who discovered, after watching a video of his own Baptism, that he had been invalidly baptized. The deacon who had performed the ceremony did not use the proper words, and as a result, Fr. Hood had not in fact been received into the Church. And as a consequence of this, he had not validly received First Communion, Confirmation, or priestly ordination, since all of those sacraments depend upon the legitimacy of Baptism.

Now, once this was found out, the Archbishop of Detroit administered all of the relevant sacraments to Fr. Hood and the young man was able to minister as a priest. You might think, “Well, that’s a strange story with a happy ending,” but it tells us, in fact, something extremely important regarding the Church’s understanding of Baptism. We believe that through the words and gestures of the sacrament, something happens. Baptism is not simply a celebration of a new life, or even an act of praying for and offering a child to God. If that’s all it is, to paraphrase Flannery O’Connor, the heck with it. It is, rather, the visible sign of the invisible grace of incorporation into the Mystical Body of Jesus. It changes an objective state of affairs, whether we acknowledge it or not.

Having said all of this, I then stressed what we might call the subjective side of Baptism. Since there were quite a few young people present, I used the well-worn parable of the eagle’s egg that tumbled out of the nest only to fall amidst a flock of chickens. When the eaglet was hatched, the only world he came to know was that of chickens, and hence he spent his first years pecking on the ground and never spreading his great wings. One day, I continued, a majestic eagle flew overhead and spotted his young confrere on the ground, acting like a chicken. “What’s the matter with you?” he asked. “Don’t you know who you are?” He then taught the eaglet how to deploy his wings and soar.

So it goes in the spiritual order. Every baptized person is, objectively speaking, a child of God, divinized, and destined to be a great saint. But the problem is that most of those who have received this new identity promptly forget it and take on the beliefs and practices of the world. Following the prompts of television, movies, social media, pop stars, and secularist ideologues, we give ourselves over to the acquisition of wealth or power or material success or fame. These things aren’t bad in themselves, but considering them our highest value and running after them with all of our powers amounts to pecking on the ground like chickens.

What we need, I told the little congregation gathered for Hazel’s Baptism, is a strong community of people to remind this little girl who she is. They didn’t make her a child of God; Christ did that through the mediation of Baptism. But they can indeed teach her not to settle for being some pathetic simulacrum of who she is meant to be. Everything that they teach her, everything that they encourage her to do, should be directed to the great end of becoming a saint.

I have sometimes wondered what this country would be like if everyone who is baptized (which I believe is still most of the nation) lived up to his or her identity as a child of God. What if everyone who is meant to soar would, finally, stop poking around on the ground? It would be a true American revolution.

FacebookTwitterPinterestEmailLinkedIn
Who is Our Lady of Charity of El Cobre?Supreme Court could rule soon on abortion pill regulations