Home Test page You will be contradicted: The Christological challenge of Karol Wojtyla

You will be contradicted: The Christological challenge of Karol Wojtyla

One of the greatest threats to the Christian life is not necessarily the alluring temptations that entice us or the unexpected disasters that shake us, but the slow, almost imperceptible erosion of our appreciation for the Gospel’s remarkable otherworldliness. Often this is driven by an implicit (or explicit) desire to domesticate the transformative power of the Gospel to suit our self-interested, pedestrian desires. We read or hear the Gospel so many times that we no longer recognize its radicalness. 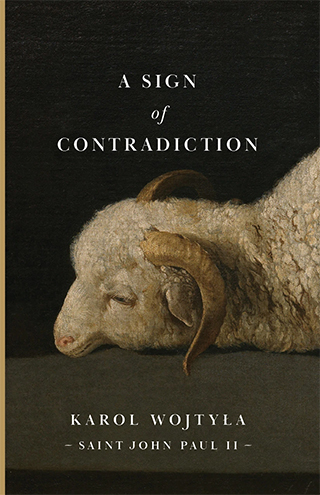 Yet if we approach the Gospel with fresh eyes and an honest heart, we are capable of perceiving Simeon’s description of Christ as a “sign of contradiction.”

One man who seemed ever capable of encountering the person of Jesus Christ afresh in His true otherness was St. John Paul II. A recently published edition of Karol Wojtyla’s Lenten reflections from a 1976 retreat (first published in the U.S. in 1979), titled A Sign of Contradiction, reminds us of how truly arresting and unexpected the message of Christ can be, if we are able to listen. As St. John Paul II observes: “The words ‘a sign of contradiction’ sum up most felicitously the whole truth about Jesus Christ, his mission, and his Church.”

Why is that? One might cite the simple reality of the Incarnation: the eternal, omnipotent, omniscient God truly inhabiting human flesh, and thus subjecting Himself to all the indignities and limitations of the human experience. The Jewish religious leadership of Jesus’s day certainly found such a claim blasphemous, as do Muslims.

Or one could cite Christ’s most arresting teachings. For instance: “But I say to you that every one who looks at a woman lustfully has already committed adultery with her in his heart” (Matthew 5:28). Or: “Again I tell you, it is easier for a camel to go through the eye of a needle than for a rich man to enter the kingdom of God” (Mt 19:4). According to Jesus, it’s not just that sexual sin and greed are bad, but that they represent constraint threats to our eternal welfare!

Certainly all of these contradict man’s pre-faith conceptions of God, morality, and truth. Yet for St. John Paul II, the divine contradiction is visible not only in the Incarnation, but in creation itself. This is because in creation’s contingency (and by extension its non-necessity), we see that the motive for God’s creation of the world and man is pure love. “Love is the motive for creation, and consequently, love is the motive for the covenant.” Jesus Himself draws on this truth in his contemplative observations regarding lilies of the field and birds of the air.

This takes on further meaning in the protoevangelium that occurs directly after the Fall, in which God promises that Satan will be defeated by man’s offspring. Though the Fall is often interpreted as man’s lowest point, St. John Paull II sees in the prophecy of future redemption the continuation of God’s unfailing love: “…How wonderfully God succeeds in reaching the human mind even in the extremely unfavorable conditions of the systematic denial of him.”

Of course, if God’s relentless, unconditional love is the most important, counter-intuitive thing for us to understand about Him, then this is also what the devil most wants to obscure. Satan seeks to destroy, “truth about the God of the covenant, about the God who creates out of love, the God who in love offers humanity the covenant in Adam, the God who for love’s sake puts to man requirements which have direct bearing on the truth of man’s creaturely being — this is the truth that is destroyed in what Satan says.” Satan aims to persuade us that we truly are unloved and alone.

In light of this, and of thousands of years of devastating human history, the Incarnation can be understood as both a restoration and a rescue operation. In man’s “rebellion for the sake of autonomy,” he becomes a “mere tool,” exploited by Satan. In the Incarnation, man, through Christ, actually finds freedom from sin, by returning to the same message communicated in creation itself: God created us out of an outpouring abundance of his love. Every action and spoken word of Christ aims to remind us of this forgotten truth.

God’s love is manifested most perfectly in his self-sacrificial act in the Passion, in which He willingly dies an ignoble death for us. God is “gift and the source of all giving.” Describing the reflection on the prayer of Gethsemane, St. John Paul II explains: “a true man was expressing before God all the psychological and existential truth about fear in the face of suffering and death,” but “ends with acceptance of the decision whereby the Father ‘did not spare his own Son” (Rom 8:32).”

“This was a decision,” he adds, “that neither the first man nor Satan could have understood.”

Indeed, as St. Paul notes in Romans, we might make sense of one willing to die for a good man—but Christ died for sinners who rejected Him. Says St. John Paul II: “On the day of his death, Jesus entered into the fullest and deepest communion and solidarity with the entire human family, and especially with all those who throughout history have been the victims of injustice, cruelty, and scornful abuse.” Even more remarkable in contrast to our own age, which thinks love is exemplified by affirming people regardless of their sins, Christ shows no restraint in indicting us for our sins, but in the same breath declares his unconditional love for us.

Moreover, in contrast to the competing visions of truth and goodness, Christianity is an economy built not on an ideological system but on a person. St. John Paul II explains:

The world sorely needed a criterion of power that would be radically other, a manifestation of a different hierarchy of values, in order that the men of those days and the men of today — even the most critical and suspicious of them — might come to believe in the truth of love.

This is the contradictory quality of Christianity: a system not based on utilitarian value, racial or national identity, economic or social justice, or maximizing human freedom, but a new life rooted in the person of Christ.

From the knowledge of the love of Christ flows, “a different culture and a different civilization, different relations in the production and distribution of material goods, a different understanding of value.” People are valued not by their racial or sexual identity, or economic output, but by their dignity as humans created in the image of God. It is Christ’s love alone that can overcome the “ruthless exploitation of men by other men, exploitation in industrial production and consumerism, exploitation by the state in the various totalitarian… systems.”

This is a truth even those of us who call Christ Lord and Savior have difficulty believing—or remembering:

Even where Christ is accepted there is at the same time opposition to the full truth of his Person, his mission, and his Gospel. There is a desire to adapt him to suit mankind in this year of progress and make him fit in with the program of modern civilization — which is a program of consumerism and not of transcendental ends.

All of us are tempted to make Christ palatable to our own tastes and preferences, to make him banal or bourgeois. In other words, to make Him like us. Yet the transformative beauty of our faith is that it is Christ who must change us.

As we all know, that process hurts. It hurts because it contradicts us—our thoughts, our feelings, our desires, and even our understanding of ourselves. Yet it is only through that sign of contradiction that we can experience the redemptive power of Christ and the cruciform life. The “sign of contradiction,” St. John Paul II tells us, is “a distinctive definition of Christ and of his Church.” The more we appreciate that, the more our own spiritual lives—and our evangelical witness—will bring hope to this broken world.

Share on FacebookShare on TwitterShare on PinterestShare on EmailShare on LinkedIn
United Nations Honors Mother Teresa With a Postage StampAugust 27 2021. Friday of Week 21 in Ordinary Time