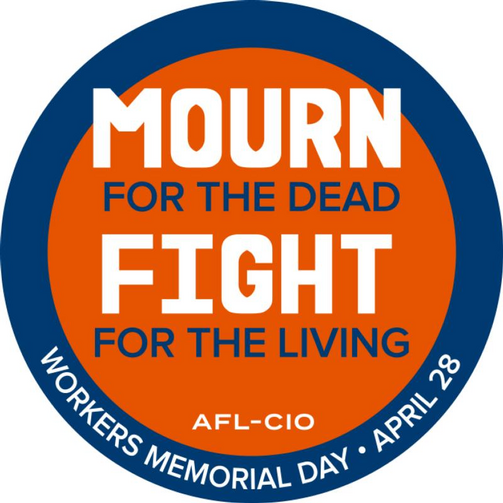 WASHINGTON (CNS) — “A prevailing culture of profit over people” creates “a culture that quantifies work and robs it of its humanity and its inherent dignity,” said Father Clete Kiley in his homily for a Workers’ Memorial Day Mass sponsored and livestreamed April 28 by the Catholic Labor Network.

Father Kiley, former executive director of the U.S. bishops’ Secretariat for Priestly Life and Ministry, decried a “culture that treats workers as cogs on a production line rather than as the precious human beings they are.”

In referring throughout his homily to workers who have died on the job as “these beloved dead,” Father Kiley said, “Each in our way holds these beloved dead, our union sisters and brothers, to sacred memory. To remember them signifies that we hold them in our minds. In Spanish, the word is ‘recordar,’ which signifies that we hold them still in our hearts.

“Each of these beloved dead was a person destined to be, as the church teaches, ‘an agent of her or his own development.’ Each was destined to be a fully integral human person. Each had a name, each a family, friends, neighbors. And each is held in communion with us right now in this Mass,” said Father Kiley, now director of immigration policy for the UNITE HERE labor union and chaplain of the Chicago Federation of Labor.

The Mass was held on the 50th anniversary of the enactment of the Occupational Health and Safety Act. The AFL-CIO designated April 28 as Workers’ Memorial Day in 1989.

“Working people living today still face significant challenges,” Father Kiley said. “Too often today, workers are denied those very rights the church and labor say are inherent. Too often today, work conditions in some places reflect the same unsafe and uncaring environments that (Pope) Leo XIII condemned more than a century ago” in his 1891 encyclical “Rerum Novarum,” which ushered in the age of Catholic social teaching.

“Too often today, workers are put in risky situations resulting in catastrophic accidents. Too often still today, just as back in 1891, workers lose their lives at work. Too often today, grieving families and co-workers — all of us, really — wonder if such deaths weren’t avoidable,” Father Kiley said.

Before the Mass started, a rolling display of union workers who died on the job in the past year, or had died from COVID-19, appeared on the screen as a silent tribute.

“This year’s Workers Memorial Day is especially timely with so many of our health care workers, first responders, postal and delivery workers, grocery workers, teamsters, and longshoremen continuing to go to work every day to provide the life essentials for each and every one of us,” said celebrant Father Sinclair Oubre, a diocesan priest from Beaumont, Texas, and a Catholic Labor Network founder, at the start of the Mass.

After Communion, Father Oubre told of how the Catholic Labor Network started. Coming from a union household — he is currently a member of the Seafarers International Union — Father Oubre recalled seeing a discarded pamphlet, “On the Condition of Workers.” “I picked it up and started reading it,” he said. “I could not believe that as someone who grew up in Catholic school and with a family who were strong in worker unions, and had been through some angry strikes … that the church actually taught these issues!”

Father Oubre in 1995 decided to go to Decatur, Illinois, as three brutal strikes had bitterly divided the town and a priest there had been pepper-sprayed in front of one of the struck plants.

At dinner with the Decatur priest, Father Oubre said he asked him, “How do you be a labor priest?” To which the priest responded, “Well, I was gonna ask you that question!” It was then that they decided they needed to identify priests and laity to spread the message of Catholic social teaching that began with “Rerum Novarum,” which resulted in the Catholic Labor Network being formed.

Share on FacebookShare on TwitterShare on PinterestShare on EmailShare on LinkedIn
Refugees at outreach center share hardships experienced during pandemicBishops will ‘consecrate’ the US and Canada to Mary. Here’s what that means