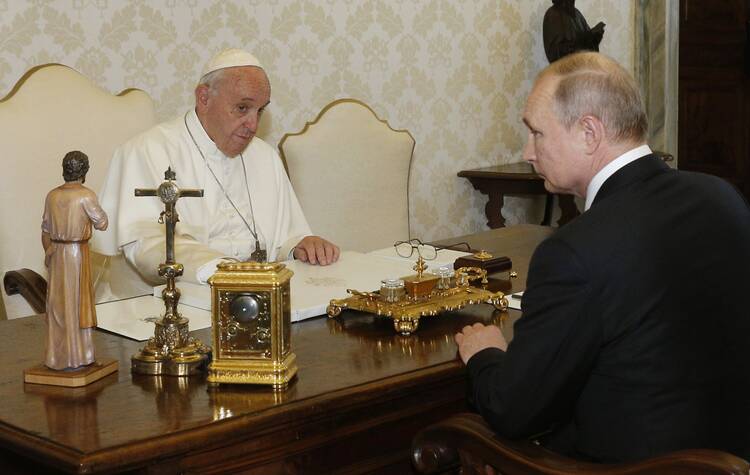 How to understand the Sturm und Drang inspired by Pope Francis’ frank comments to the Italian daily Corriere della Sera this week? The pope shared that he is ready to go to Moscow and meet with Russian President Vladimir Putin—a man who last year called the pontiff on his birthday. They know each other. They have met three times.

Gladly would the bishop of Rome leverage this relationship to talk Mr. Putin off the mad ledge he is on.

In the interview, Francis refers to the “atrocities” of war in Ukraine. No one can doubt his outrage at the immorality of this invasion. But his failure to call out Mr. Putin by name riles commentators who refuse to realize: Popes. Don’t. Condemn.

Why not? For one thing, a sinner might see the light, as Saul did on the road to Damascus.

Francis’ biggest offense, though, according to The Wall Street Journal’s editorial board, was speculating that NATO might share some responsibility for provoking aggression by, as the pope said, “barking at Russia’s gate.” (This is not such an unusual view: The former U.S. ambassador to the Soviet Union Jack Matlock—among other diplomats, academic experts and independent journalists—has pointed out the West’s role in triggering Russian aggression, including the lethal strategy of inching NATO right up to the Russian border. The late U.S. diplomat George Kennan warned in 1997 that NATO expansion would be a “fateful error.”)

What critics mistakenly imagine is that Pope Francis is a political world leader. Instead he is a Christian world leader.

What critics mistakenly imagine is that Pope Francis is a political world leader. Instead he is a Christian world leader—dedicated to following Christ, who told us to love our enemies. And Vatican diplomacy must be tuned to the church’s mission.

As the only religion with sovereign status, the Catholic Church has unique functionality within the inter-state system: sending its diplomats overseas and receiving ambassadors to the Holy See, participating in the United Nations as a permanent observer, even signing treaties with other nations. Yet with no territory (besides the pinprick of land called Vatican City), no military (besides the ceremonial Swiss Guard) and hardly any economy (gift shop items might be the biggest export), the Vatican lacks the material interests that typically motivate state behavior. This allows papal diplomacy to focus on immaterial goals such as peace, human dignity and the common good.

In Francis’ view, at the root of political conflict is always a clash of interests related to power. The godly posi­tion is remaining equidistant from all sides, which opens the door for constructive and self-giving diplomacy.

It helps that Pope Francis is supremely well-informed and as impartial as humanly possible. Not only is he aware of what is happening on the ground in Ukraine and in neighboring countries; he and his diplomatic apparatus—namely, the secretariat of state, led by Cardinal Pietro Parolin—are concerned about the war’s effect on noncombatant states such as Egypt, Poland and Taiwan. Each is threatened by sanctions, refugee flows and new geopolitical calculations emerging from the conflict.

The godly posi­tion is remaining equidistant from all sides, which opens the door for constructive and self-giving diplomacy.

Pope Francis has also been consistent. From the start of his pontificate, he has warned of arms proliferation and has said that nations are engaging in a third world war “piecemeal.” He directs this criticism at every nation on the Stockholm International Peace Research Institute’s list of big weapons sellers, in which the United States remains in the lead.

What the Catholic Church believes, and the Vatican knows, compels the pope to act on behalf of peace and reconciliation, even if those are unpopular goals.

Ministry to a broken world

Within months of the Japanese attack on Pearl Harbor in December 1941, Pope Pius XII made a decision that left American and British politicians howling: The Holy See and Tokyo established formal diplomatic ties, making Japan the first Asian country to recognize Vatican sovereignty.

President Franklin D. Roosevelt described the move as “unbelievable,” and his State Department reacted with horror. But the Holy See’s view of diplomacy as a forum for ministry to a broken world is often unappreciated by both secular and religious commentators who assume the church should not compromise her spiritual values by engaging with immoral actors.

Regarding Japan, in Pius XII’s view (as pontiffs before and since have concluded), the only way to influence a malevolent regime is to engage it directly. This drive to exert Christian influence in earthly contests frequently underlies Vatican diplomacy, a motivation more often tacitly understood than explicitly stated. As a previous pope, Pius XI, declared, “When there is question of saving souls, or preventing greater harm to souls, we feel the courage to treat with the devil in person.”

As a previous pope, Pius XI, declared, “When there is question of saving souls, or preventing greater harm to souls, we feel the courage to treat with the devil in person.”

The idea that optimal diplomacy requires continuous negotiations is a principle promoted by the legendary 17th-century diplomat Cardinal Richelieu, who was a papal nuncio before he became chief adviser to French kings. It was famously practiced by Pope Francis’ namesake, St. Francis of Assisi, who crossed enemy lines during the Fifth Crusade in 1219 to meet with Sultan al-Malik al-Kamil. That meeting did not end the war but modeled a Christ-like style of diplomacy: St. Francis “came not as an ideologue, but as a missionary with a message of peace,” observed Archbishop Christophe Pierre, the current nuncio to the United States, at a conference celebrating the 800th anniversary of the event.

Throughout his papacy, Francis has described dialogue and personal encounter as central to all sorts of problem solving, including statecraft. He advances a diplomacy of encounter that builds on the trust that can develop between people over time if they suspend judgment and work to cultivate mutual respect.

A successful example of the church serving as an agent of reconciliation through personal encounter came in 2014, when Cuba and the United States turned to the Vatican after reaching an impasse in negotiations to normalize relations. Diplomats from the two countries came to Rome and met separately, then together, with Cardinal Parolin, the secretary of state, who facilitated final negotiations using pastoral techniques in a classic act of papal mediation.

There was something pretty powerful about it being in a religious venue, be­cause they blessed this process literally and spiritually. We’d had this labori­ous, tedious series of discussions for a year and a half, then you have people of spiritual stature speaking in very soaring words about what this would mean to people around the world, and how it would be a hopeful sign in the darkness.

Catholic theology sees God working through history. The supreme being did not kick things off and step away, as with deism’s watchmaker God. Christians have a liberating reason to embrace risk: God can step into the space you create by beginning something new.

Francis explores this idea in “Evangelii Gaudium.” When looking at conflict, the pope explains, some people ignore it while others get sucked into it. But imagine a third way: Face the problem head-on and make it the start of a new process. As the pope reassures us, “Trust what God is doing through you.”

Having spent years studying Francis’ practice of diplomacy, I sincerely trust what God is doing through him—perhaps sometime soon in Moscow.

[Read next: “Pope Francis is wise to not call out Putin directly. Here’s why.”]

Share on FacebookShare on TwitterShare on PinterestShare on EmailShare on LinkedIn
Eucharistic Revival: Preacher hopes to convey the 'transformative nature' of the Real PresenceMust Roe go? Yes, say Alito's leaked draft and other critics of abortion precedent