Home Test page “We give them a stone!”

Ready for a revival?

Earlier this week, the American bishops voted to push forward on a multi-year plan for “Eucharistic Revival” – rooted in concerns about Catholic engagement, Catholic adherence to beliefs about the Eucharist and (we hope) evangelization.

(I’ve written about this before in a few places. Maybe start here.)

Here’s the plan, which includes $28 million for the final Eucharistic Congress in Indianapolis in 2024.

Of course I’m going to hit with you some history. 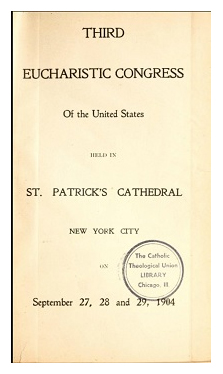 To pull out one example, let’s look at the Third National Eucharistic Congress held in New York City in 1904.

The published proceedings, including introductory and invitational letters, sermons, the schedule, the music for the Masses and the conclusions can be found on archive.org.

(Others available on archive.org are the proceedings from the first national congress in the US, in 1895, and then the 7th, in Cleveland in 1935.)

It makes for very interesting reading – because, as I keep saying over and over, it’s helpful and even necessary to have historical perspective when considering, commenting on, or trying to address contemporary problems.

You find, first of all, that these contemporary problems are not unique.

Why was there a Eucharistic Congress held in 1904?

The stated reasons might sound familiar: declining Mass attendance, concerns about Catholic engagement with the Church and its practices, the need help Catholics connect more deeply with Christ through the gift of the Eucharist so that they might be strengthened, not only on their journey of personal holiness, but to be leaven and light in a suffering world that needs Christ.

A good doorway to peak at what was going on and the dominant concerns might be the resolutions adopted by the bishops and other clergy at the Congress:

The Bishops and priests of these United States in the Third Eucharistic Congress, held in the Archiepiscopal City of New York, resolve :

1. That the pastors encourage the people not only to attend the Holy Mass on Sundays and holy-days, and to be on time, but to attend Mass on week days, by explaining to them the spiritual advantage thereof frequently. ”

2. Resolved, That the pastors keep their churches open as often and long as possible during the day and night, and encourage their people to come and visit our Blessed Lord daily in the Sacrament of His Love.

4. Resolved, That the priests of the United States join the Eucharistic League, the duties of which, simple and efficacious, are most conducive to the true sacerdotal spirit. It will lead them to personal piety and most effective zeal for the salvation of souls.

5. Resolved, That to correct the apparent irreverence to, or at least the neglect of, the Blessed Sacrament which may be observed in some instances in our churches, the sense of the Eucharistic League is that, all devotions should be centered in the Real Presence, and that all priests are advised to reiterate their instructions to the people, that, however right and useful it may be and is to honor the images of Christ and His saints, as they relate to Him and to them, such honor should never be paid to them to the neglect of the worship due to God in the Sacrament of the Altar, where He is really present, Body, Blood, Soul and Divinity.

6. Resolved, That the clergy be faithful in giving frequent instructions on Eucharistic subjects, explanations of the Holy Sacrifice of the Mass and of the ceremonies and vestments relating to it.

7. Resolved, That the pastors establish in their churches the Eucharistic League of the People, or other Eucharistic society approved by the Holy See, in order to bring the people to realize better the divine fact of the Real Presence of Our Lord in our churches.

8. Resolved, That the Congress recommend the practice of nocturnal adoration on the occasion of the Forty Hours’ devotion and on Holy Thursday night.

9. Whereas, It is unfortunately too true that many Catholics neglect to make due preparation for Holy Communion and proper thanksgiving after its reception. Resolved, That the Congress earnestly request all pastors to urge their people to carefully prepare themselves for the worthy reception of the Most Holy Sacrament of the Eucharist

There are many differences between 1904 and the present day, of course, but it’s illuminating to look back and see, once again, so much that is strikingly familiar and to also reflect on those differences.

The volume includes a number of sermons and papers on various topics, including “The Holy Eucharist in the Twentieth Century:”

The twentieth century, upon whose threshold we are standing, opens up before us with signs and features which plainly foretell that it will be an eventful one in the history of the race. As the heir of the past, it comes to us laden with seeming riches indeed, but whose value the future alone can reveal.

The material world as a whole is almost within its grasp, and in its confident and at times boastful assurance it flatters itself that Nature’s inmost secrets are presently to be disclosed to it’s eager vision. It is along that line of material triumph that it has planted its footsteps, has set its face, has marshalled its activities and hopes for its glories. With head erect and every sense alert, and the blood of its young life surging through its every vein and artery, like a young giant it is running to what it believes is cer- tain victory. Will it succeed ? Or will it fail ? No man can tell. But one thing he can tell and that is, that even if it does succeed it will not be happy.

And this, on Mass attendance. It’s fascinating to me, to read these words acknowledging the difficulties people have and being willing to place some blame on clergy:

The observance of Sunday, the attendance at Mass on the Lord’s own day is the connecting link between the toilers of the workaday world and the Church which represents God on earth. And it is for us ministers of God’s Church to show the faithful whom we can reach all that the religion of Christ means for the solution of the great questions which vex the world to-day, and which loom up full of portent and of menace for the future of Christian civilization; to teach them to have no part in the un-Chris- tian strife and ill-will between classes, the fraud, oppression and arrogance on the one side, the envy, misery and turbulence on the other ; to point out the true remedy for the ills of the world — at the foot of the cross whereon Christ died, at the altar whereon He continues to immolate Himself for all alike, rich and poor.

We may, perhaps, accomplish something towards this end if we do all in our power to attract people to the house of God, and nothing in the world that might repel them. Of course Catholics ought to know their duty and should all come to Mass, if possible, as a matter of conscience. But we know how much men are liable to be influenced by other and lower motives which come in to re-enforce the sense of duty. And these motives sometimes have much to do with the fulfilment or neglect of the Sunday duty. The material beauty of the house of God, good preaching and good singing, are attractions which bring people to church.

But above all, the personal character and work of the priest, his kindness to the poor, the sick and the bereaved ; his earnest, zealous, patient solicitation on the house-to-house visitation; his avoidance in his intercourse with the people and in his preaching and announcements of everything which might give just cause of fault-finding, of anything which might repel men from the house of God. Woe to us if, like the wicked sons of Heli, we draw the people from the Sacrifice of the Lord!

What a pity if, when the good, self-sacrificing, faithful people come to the church once a week to lay their worldly cares and troubles before the altar of God, looking for solace and peace for one brief hour, after the long days of toil and weariness, of temptation and maybe sin and discouragement, what a pity, if, when they come for bread — the bread of life — we give them a stone! — and if, when they are longing to lift up their hearts to God, as in the Preface we bid them to do, we rather drag them down to material things, to money, money and schemes for raising money. (emphasis added)

(Editor’s note: This post originally appeared on the “Charlotte was both” blog on Nov. 18, 2021, and is reposted here in slightly different form with kind permission of the author.)