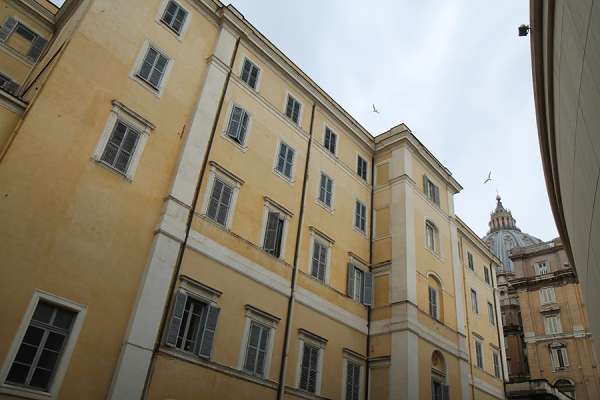 Vatican City, Mar 26, 2020 / 09:31 am (CNA).- A Vatican official who is a resident of the guesthouse where Pope Francis lives has tested positive for coronavirus, according to reports.

The Catholic Herald wrote March 26 that Fr. Gianluca Pezzoli, an official in the Vatican’s Secretariat of State, is sick with COVID-19, his diocese confirmed.

According to a report by the Italian newspaper Il Messaggero Wednesday, the 58-year-old priest has been hospitalized.

The Diocese of Mantua, where Pezzoli is incardinated, did not give information on the priest’s current location or condition, according to The Catholic Herald.

On the diocese’s website, Pezzoli’s residence and contact is listed as the Casa Santa Marta in Vatican City.

Il Messaggero also reported March 25 that Pope Francis was not likely to have come into contact with Pezzoli recently; right now the pope moves mostly between his room and the chapel, where he offers Mass every morning with his three priest secretaries and at least one religious sister.

During this time, he is also eating his lunch alone in his room, not in the guesthouse’s dining room, according to Il Messaggero.

Francis’ schedule has lessened, though he continues to have some meetings in the apostolic palace, from where, during the coronavirus pandemic, he is also livestreaming his weekly Wednesday general audience and Sunday Angelus.

Papal spokesman Matteo Bruni told journalists March 24 that there have been four confirmed cases of the coronavirus connected to Vatican City. These four did not appear to include Fr. Pezzoli.

Bruni stated that these four patients “had been placed in solitary confinement as a precaution before they tested positive and their isolation has already lasted for over 14 days; currently they are being treated in Italian hospitals or at home.”

Share on FacebookShare on TwitterShare on PinterestShare on EmailShare on LinkedIn
Coronavirus indulgences evoke Francis' 'ridiculously-pardoning' churchVirus infections near 500,000 as health systems buckle