Vandana Shiva on how we risk becoming “obsolete technology” 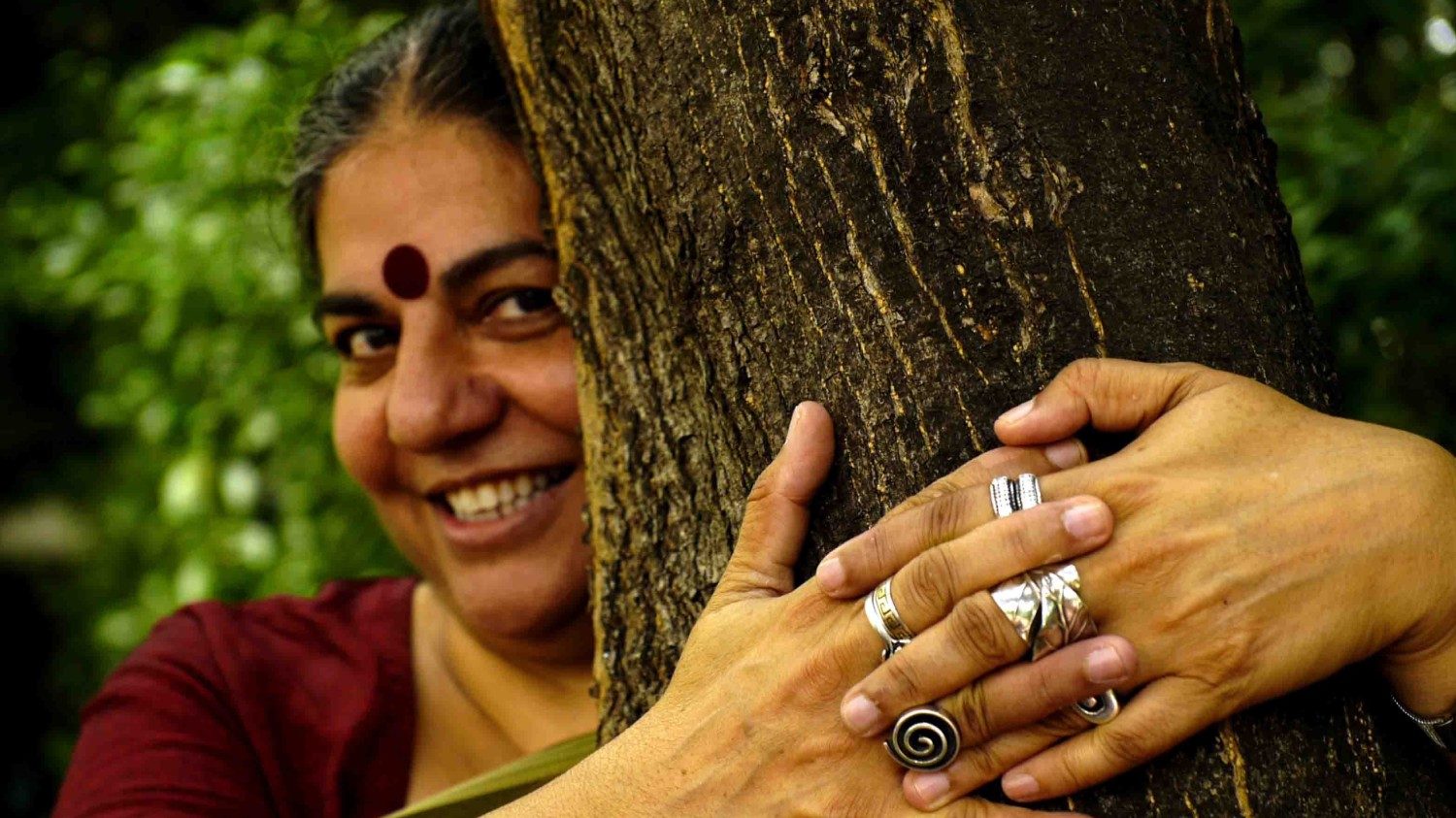 One of the experts invited to speak at the ongoing “The Economy of Francesco” event in Assisi is reknown environmentalist and activist, Vandana Shiva.

She address the participants on Friday, 20 November, during a talk together with Pauline Effa entitled “An economy of abundance: how to foster bottom-up development?.

Shiva is an Indian physicist, scholar, environmental and social activist, food sovereignty advocate based in Delhi. She has written more than 20 books and  founded the Research Foundation for Science, Technology, and Natural Resource Policy (RFSTN), an organization devoted to developing sustainable methods of agriculture.

You certainly must have read Pope Francis’s Encyclical Laudato si’. What impression did it make on you?

I have not just read Pope Francis’s Encyclical Laudato si’, I participated in the dialogues at the Vatican on Redefining the Economy , and  going beyond the economy of Indifference .When I read Laudato si’ I felt I was reading our ancient Veduic Texts , specially the Atharvaveda on our duty to have reverence for the Earth and all her beings .

What are your expectations of the event in Assisi?

The event was planned in March , before Covid, before the lockdown . Given the ecological crisis, the crisis of social and economic inequality ,I saw the event as very important .Even in March it was clear we need an economy of giving and and sharing for the common well being of all beings in our common home . With Covid and the lockdown the Economy of Francesco has become an ethical and ecological imperative for the survival and well being of the planet and people . I look forward to participating

How have the various religions contributed to recover an authentic contact with creation? Are diverging perceptions of the origins and theology of creation obstacles?

At their core, all faiths teach us to take care of creation of each other . No faith says destroy the earth , let your neighbour starve . The stories of creation might be different, but the duty to creation is common .Faiths focus of duties and unite us in our common humanity . A politics of divide and rule creates divisions . For me , the teachings of the Isho Upanishad and Gandhi have important relevance to understand ecological limits and ecological sharing of the Earth’s gifts

Distilling the teachings of the Isho Upanishad Gandhi remind us that The Earth has enough for everyone’s needs , but not for a few people’s greed. The first mantra of the Isavasya Upanishad says

(The Universe and the Earth is permeated by the divine and is for the benefit of all beings .We should enjoy the gifts of the earth through renunciation , not through greed of possession and exploitation. Taking more than our share to fulfil our needs is theft from other species, other humans and the future ).

In an interconnected world that regenerates life,extracting more than one’s rightful share by violating ecological limits of regeneration creates an ecological crisis ,and violating ethical limits of justice creates scarcity, poverty and hunger  in society . When the powerful take more of the Earth’s gifts through extractivist production and consumption patterns they impose, there is less for others. In an world based on greed, taking without giving , “More is Less”. More for the rich , the billionaires , the powerful ,is less for the Earth and for people. “In Less is More Jason Hickel walks us through  the interconnectedness

A few years ago, you founded the Naydanya movement to protect native seeds from being patented by multinationals. At what point do you find yourself now in this “fight”?

I started Navdanya because I could not accept the lie of the  multinationals that seed is a machine they invent , and can therefore take patents on it . For me this was a violation of the integrity of creation and her living organisms . GMO for the corporations meant “God Move Over” , now we are the Creator. We are gods.

For me Navdanya is my service to creation and to the common rights of farmers. We have created 150 community Seed Banks,I have contributed to our laws that say that Plants, Animals and Seeds are not human inventions , and therefore not patentable . I have helped write laws that recognise Farmers Rights . Today ,the Biotech companies working with the Tech Billionaires want to create digital agriculture and farming with out farmers . They want to to replace real food and the bread of life with patented lab food . Poverty and hunger and Chronic diseases are a consequence of greed of corporations  who push poisons and chemicals to grow food and process it .There is now an attempt to make Fake Food and Artificial Food in labs and Patent every step of the process which will contribute to new avenues of extractivism and further aggravate the food and health crisis. Every step towards more extraction, more complication, more manipulation , more concentration creates more demands on the Earth’s Resources , and takes away the just share from other species and people .

In what way can these multinationals be convinced to abandon the logic of profit?

Greed and power make the billionaires who control the corporations blind and deaf. I do not think we need to convince them . We need to be convinced as individuals and communities that we must take the right action to love and protect the earth , to have compassion for all beings , to share. Creating alternatives based on giving and sharing creates a shared prosperity , and makes us free of corporate control .

Are you optimistic that this can be done?

I am optimistic because every day I save and sow Seeds of Hope, Seeds of Resilience.

In some cases, it seems that technology can provide poorer countries and other less fortunate countries opportunities for growth, thus alleviating the poor conditions in which they find themselves. In your opinion, is it right to resort to technology, or is it better in any case to listen to the Earth when it tells us that certain places are naturally not conducive to certain types of cultivation?

Over the last four decades , I have studied technologies imposed on countries like mine with the claim that they would create growth and remove hunger and poverty . I did a Book on the Green Revolution which created new markets for the fertiliser industry , destroyed the soil , the water , and contributed to climate change . It left the farmers trapped in debt. Then GMOs were introduced with the same argument. They left a trail of debt and suicides , and even though they were sold as a miracle pest control technology , they failed to control pests. Hundreds of farmers died because of pesticide poisoning… Technology means tools . Tools need to assessed and chosen with responsibility .Tools are means to improve human well being while working according to the laws of ecology. The Big Technology barons are trying to elevate the tools through which they make superprofits by mining our data, and patenting everything – our seeds, our food , our data -as a new religion. Tools and technologies are being made the higher ends , and humanity and the earth are being reduced to means . Humans are being defined as “unimproved technology” who need to be upgraded to become appendages of machines . Real ,Nourishing food is being defined us “unimproved technology”, to be “improved” through lab food, fake food. We must return tools and technologies to their right fuel place – as means to higher ends

What is your opinion regarding the various movements that have originated recently across Europe in defense of the environment (for example, the young people and Fridays for Future)?

I welcome all movements . My efforts have always been to unite different faiths , classes , genders , races to seek our common humanity while addressing injustices . Protecting the Earth is everyones duty .Economies of care for the Earth will take care of the Earth and future generations

What role do women have in this ecological transition?

As a quantum physicist, I do. Not subscribe to essentialism . My life’s experiences have taught me that women were left to take care of their families and communities . Work in care was considered non work, was disrespected and devalued. But whether it is the pandemic, or the call to regenerate the earth , or take care of community facing hunger, unemployment and poverty, women’s expertise and dedication to care will lead the ecological transition. Every ecological movement I have participated in has been led by women.

Women never forgot how to care. They can teach everyone the value of care, love and compassion .

Share on FacebookShare on TwitterShare on PinterestShare on EmailShare on LinkedIn
Cardinal Parolin highlights recently found 1916 Vatican letter condemning anti-SemitismCovid: the deception of selfishness, the force of compassion