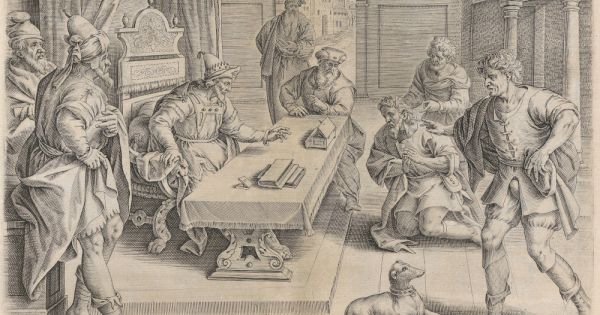 “The Gods Must Be Crazy” was the most successful film ever produced in South Africa. It’s a slapstick social commentary that’s both entertaining and seriously thought-provoking. Set in Botswana, the story revolves around interaction among people from vastly different cultures: the patriarch of a desert tribe who has had no contact with the outside world, a biology doctoral candidate student studying samples of elephant dung, his South African mechanic friend, a woman teacher and a bumbling gang of terrorists. The plot explores their clash of worldviews when a stray Coca-Cola bottle brings them into unplanned contact with one another.

What makes the story a comedy rather than a tragedy is the characters’ willingness to adjust to each other’s uniqueness, to express curiosity rather than judgment and to help one another. Their concern for others is the antithesis of the inhumanity of the miserable debtor Jesus describes today’s Gospel.

As often happens in the Gospels, Peter plays the straight-man and sets the stage for Jesus to launch into a parable. After a discussion about how to deal with offenses in the community, Peter tried to appear piously magnanimous, suggesting that he might accept the requirement to forgive another — at least his brother — up to seven times (a number that implies always). In reply Jesus says, “Seven? No! Seventy-seven. … Not just always, but forever and ever, Amen!” That phrase sounds infinite, and that’s his point.

From there, Jesus wove a parable describing the dynamics of the kingdom of heaven, the realm where divine values are operative. By nature, the divine realm is superlative, so too was the debt of the manipulative miser who begged his master for mercy. According to Matthew, this guy owed 10,000 talents. A talent weighed between 75 and 100 pounds, thus the fellow was in debt for the equivalent of at least 750,000 pounds of silver or gold — considerably more than anyone could hope to pay back in multiple lifetimes!

The master, who himself must have been fabulously wealthy, allowed the debtor’s pleas to touch his heart. The master’s compassion was such that his feelings for the servant outweighed the enormous debt. But this miserly debtor was immune to the type of humanity the master proffered. By forgiving his impossible liability, the master had introduced the man into a new way of living; he invited him into a world in which people were valued more than any possession. Tragically, rather than abide in a world of compassion, this wretched fellow refused to forgive another servant a paltry sum. The self-destructive debtor of this story clung to the vices Sirach describes so creatively in today’s first reading.

Sirach gives us such a vivid description of merciless people that we can easily visualize them — at the same time seeing what we look like when we act like them. Picture the posture of someone hugging her wrath like a petulant child. Next, imagine what it looks and feels like when we decide to nourish our anger. “Nourish” is a key word here. Sirach’s image suggests that cherishing ill will starts like eating too much chocolate; we do it in spite of the fact that it makes us sick. Eventually it becomes more like smoking, addicting us to something that causes emotional and spiritual cancer. Cultivating resentment shrinks the soul and traps a person in a self-made, unforgiving world with no exit. That was where the unforgiving wretch put himself.

Jesus concluded his parable by calling his disciples to cultivate a forgiving heart. His story teaches us that when forgiveness seems too hard, the time is ripe to let our memory lead us to gratitude. The parable of the big debtor suggests that if we want to keep accounts, most of us have 750,000 reasons for gratitude to weigh against something between seven and 77 opportunities to forgive. Those scales will never even out.

In “The Gods Must Be Crazy,” although the protagonists never shared a common language or understanding of the world, the only characters to miss out on a happy ending were the terrorists and a self-centered tour guide. They were the only people who never cared about the predicament of others. Like the big debtor, they trapped themselves in their own small worlds.

Today’s Liturgy of the Word invites us to enter into the dynamics of the kingdom of heaven. Gratitude is the emotion that introduces us to this realm. Based on that entry point, we will realize that even when we don’t understand one another, concern for each other’s welfare outweighs offenses and misunderstanding. Worldly standards may see this as crazy. Christians can enjoy it as godly.

[St. Joseph Sr. Mary M. McGlone serves on the congregational leadership team of the Sisters of St. Joseph of Carondelet.]