Home Test page To be deep in history is to cease to be Mormon: An interview with Jeremy Christiansen

To be deep in history is to cease to be Mormon: An interview with Jeremy Christiansen

There is something remarkably engaging about conversion memoirs. Among Catholics, the conversion memoir has become a prominent book genre in its own right. This tradition goes back many centuries. Among them are Saint Augustine’s Confessions, the autobiography of Saint Ignatius of Loyola, Scott and Kimberly Hahn’s Rome Sweet Home, G.K. Chesterton’s The Catholic Church and Conversion, Thomas Howard’s Evangelical Is Not Enough, as well as compilations like Surprised By Truth, Faith and Reason, or By Strange Ways. 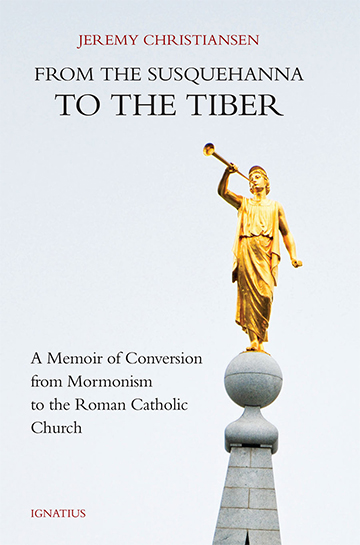 Most commonly, these stories chronicle the individual’s conversion from some form of Protestantism to Catholicism. Occasionally one will encounter stories of conversion from Judaism (From the Kippah to the Cross) or Islam (From Islam to Christ), or even agnosticism (Dying to Live) or atheism (Something Other Than God).

Jeremy Christiansen’s From the Susquehanna to the Tiber: A Memoir of Conversion from Mormonism to the Roman Catholic Church (Ignatius Press, 2022) is a bright star in the galaxy of conversion memoirs. Christiansen recounts his formative years in the Church of Jesus Christ of Latter-Day Saints (colloquially known as the Mormon church), and then traces his struggles with that faith, recounting how that ultimately led him across the Tiber.

More than just a personal memoir, the book showcases the fruits of Christiansen’s scholarly labors, digging into the intricacies of Mormon history and belief, and thus can serve as a powerful apologetical tool.

Christiansen recently spoke with Catholic World Report about his new book, the influences on his conversion, and the state of the Mormon church today.

Catholic World Report: How did your book come to be?

Jeremy Christiansen: I had a number of conversations with people who were LDS and a part of my life, and they asked me, “Did you ever really have a testimony?” I was shocked anyone would ever ask that, because I believed in Mormonism deeply. My wife asked me the question, too. And so I sat down and started to write out, based on my remembrances and also the detailed journals I kept, the course of how I came to believe.

I don’t think anyone who looks at my life can sincerely doubt that I truly believed in the claims of the LDS church. They meant everything to me at the time.

CWR: I think it’s safe to say that you were a remarkably committed Mormon in your younger days. At the time, did you feel a confident assurance that Mormonism was true? Or were there any early cracks in the façade, so to speak?

Christiansen: When I was 18 or so, I had what seemed to me a profound experience in which I felt exactly what I had been taught all my life I needed to feel in order to know the Book of Mormon was true. I never had that experience before then. My faith was strong and intact throughout my life from that point onward, up until I was in my second year of law school when cracks started to form then.

CWR: How much experience did you have with Catholicism while growing up?

Christiansen: Little to none. My parents were and are very tolerant, good people. They never instilled negative feelings into me about Catholicism, at least not consciously or explicitly.  I just never had much of any interaction with Catholicism growing up, and what little I did was in teachings from the LDS church, some of which used to be very negative.

One of Mormonism’s “apostles,” a man named Bruce McConkie, wrote a famous treatise called “Mormon Doctrine” back in the 1950s. Initially, that book equated the Catholic Church with “the Church of the Devil” mentioned in the Book of Mormon. He had a fairly rabid anti-Catholic streak. And while the LDS church made him revise those inflammatory statements later, there is a heavy influence from them to this day.

My first experiences with Catholicism were in Argentina when I was on LDS mission, but even there it was minimal because faithful Catholics would not speak to us. It was not until I moved to the Washington, D.C. area in 2016 that I first met really devout Catholics.

CWR: What sort of role did your exploration of the early history of the Mormon church play in your conversion?

Christiansen: A huge role. St. John Henry Newman famously said, “To be deep in history is to cease to be Protestant.”

Well, multiple that by a factor of 100 for Mormonism. As soon as I had internally just opened up to even the possibility that my spiritual experiences in Mormonism may have been just my own emotions, it did not take long for historical reading about Mormonism to really convince me that Mormonism is not what it claimed to be.

Christiansen: I certainly considered myself a Christian as a Mormon. But by Christian, Mormons simply mean, “someone who purports to follow Jesus Christ.” The early history of Christianity and the import of those early councils is lost on most Mormons, who do not understand the context and controversies behind them sufficiently to understand why, generally speaking, the Nicene Creed is such a marker for who is and who is not a Christian.

I do think most Mormons today consider themselves Christians; I do not think they would use the term “orthodox.” But again, what they mean is that they try to follow their own understanding of Jesus Christ, not that they follow the teachings of traditional Christianity when it comes to the nature of Christ. In his Introduction to Mere Christianity, C. S. Lewis briefly addresses the question of what defines “Christianity,” and he settles on belief, rightly, because he notes that if it merely about doing good for trying to follow Jesus’ teachings, anyone is a Christian if they so self-identify.

CWR: Was Joseph Smith a charlatan, or simply misguided? And what about LDS church leadership since then: are these men knowingly leading people astray, or do you think they have honestly good intentions?

Christiansen: This is a really complex question. There are a few theories, each of which is plausible and has its strengths and weaknesses, about Joseph Smith.

One theory that I have found persuasive at times, is the “pious fraud” theory, advocated by scholar of early Mormonism, Dan Vogel. Vogel persuasively contends that accounting for all the evidence, it seems likely Joseph Smith, at some point, came to truly believe he was called of God and on a divine mission, but that he also thought it was perfectly acceptable to deceive people for a greater good. So, according to Vogel, Joseph Smith knew there were no real golden plates, but to convince people they were real so they would read the Book of Mormon he was working on “translating,” (because he thought it would bring people closer to God), he fabricated a set of fake plates that he kept under a sheet or in a box so that people could “heft” the object, thumb the metal leaves, etc.

One thing that is pretty undeniable is that Joseph Smith was incredibly comfortable not telling the truth. His practice of polygamy is rife with instances where he is publicly accused of it, he publicly and vehemently denies it, yet he was married to something like two dozen women at the time.  At the end of the day, no one knows Joseph Smith’s heart but God.

As for the current LDS leadership, my own view is that it is likely a mixed bag. Are there people who are true believers? I have no doubt of that. Probably the majority are. Many were ignorant of a lot of early Mormon history until pretty recently, when the LDS church realized it had to deal proactively with the issue. But my own sense of human nature and study of contemporary Mormon history in the 20th century leads me to believe, firmly, that some do not actually believe.

But that should be unsurprising. Surely not every Catholic bishop possesses supernatural faith. There have been and will continue to be Catholic leaders who do not believe. I think the same is true with Mormonism, because it is full of humans. I don’t know about the current Mormon leadership on this issue, but I’m just saying that in Mormonism’s short 200 year history, including in the recent past, have there been people who do not believe but are nonetheless leading people to stay in the faith? Yes, that seems pretty obvious to me.

CWR: What do you hope people get out of this book? More specifically: did you write this book for Catholics to be more familiar with Mormon teachings and Mormonism’s problems, or for Mormons who might be struggling with their faith?

Christiansen: I wrote the book for both audiences.

I hope Catholics can learn to understand where Mormons are coming from, and I hope that Mormons, especially those who might be questioning their faith right now, will see the True, the Good, and the Beautiful in Catholicism.