The sharing of goods and the social function of private property 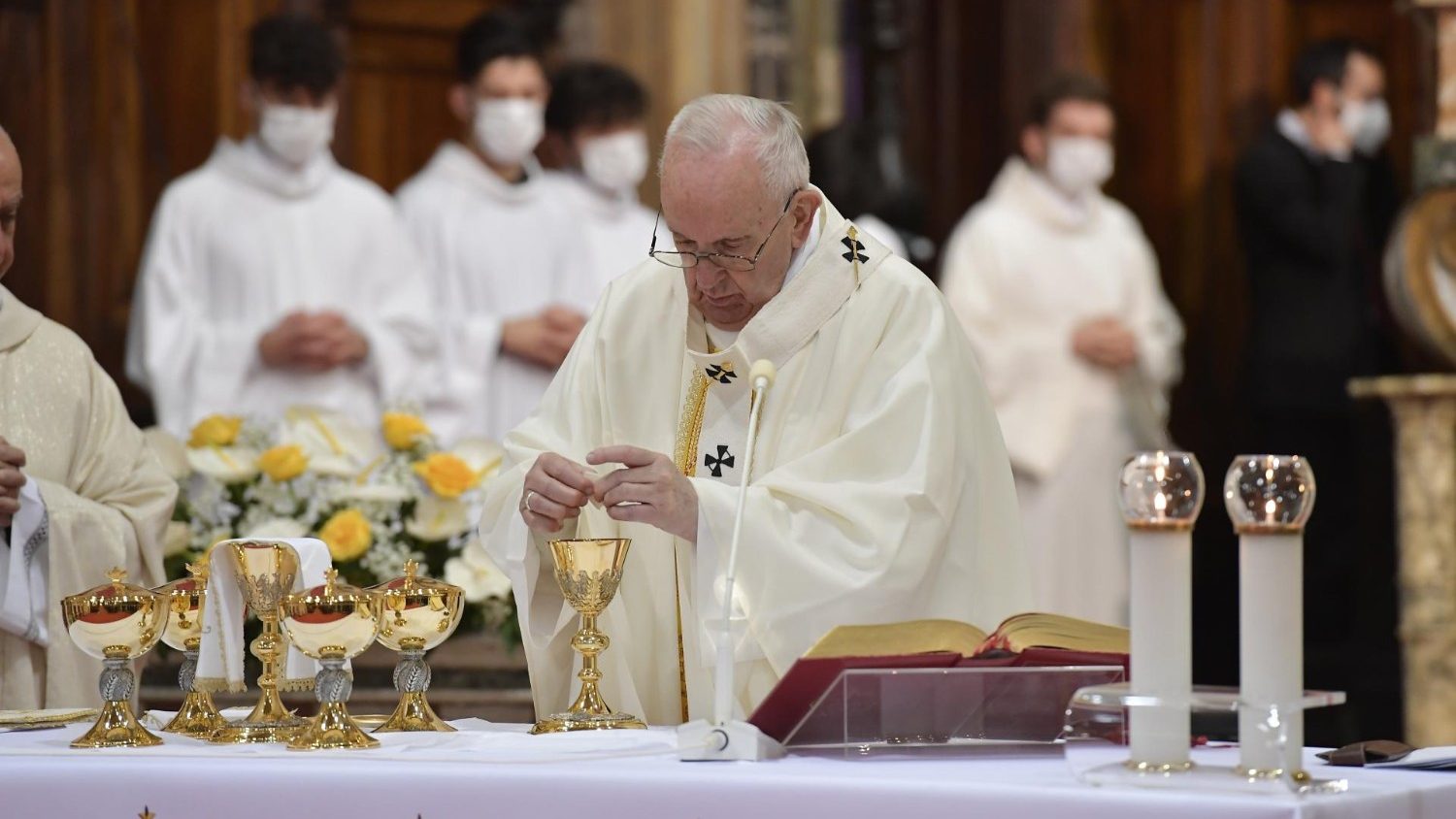 The Acts of the Apostles tells us that “no one said that any of the things that belonged to him was his own, but they had everything in common.” This “is not communism; it is Christianity in its pure state.” With these words, Pope Francis, in the Mass celebrated on Divine Mercy Sunday, commented on the sharing of goods realized in the first Christian community.

Often times, and even very recently, the current Bishop of Rome has been criticized for questioning the untouchability of the right to private property, and his words have been linked to Marxism and communism. Last November 30, in a Message on the occasion of the opening of work of the International Conference of member judges of the Committee for Social Rights of Africa and America, Pope Francis said, “We build social justice on the basis of the fact that the Christian tradition has never recognized the right of private property as absolute and untouchable, and has always emphasized the social function of any of its forms. The right of ownership is a secondary natural right, derived from the right held by all, arising from the universal destination of created goods. There is no social justice capable of addressing inequity that presupposes the concentration of wealth.”

Pope Francis has addressed the topic twice in his social encyclicals, most recently in Fratelli tutti, published on 4 October 2020. In that text, the Pope recalls the positions advanced in the social encyclicals of Popes John Paul II and Paul VI. For instance, in paragraph 120 of the encyclical signed on at the tomb of the “Little Poor Man of Assisi,” we read, “Once more, I would like to echo a statement of Saint John Paul II whose forcefulness has perhaps been insufficiently recognized: ‘God gave the earth to the whole human race for the sustenance of all its members, without excluding or favouring anyone’ (Centesimus annus, 31)… The principle of the common use of created goods is the ‘first principle of the whole ethical and social order” (Laborem exercens, 19); it is a natural and inherent right that takes priority over others (Compendium of Social Doctrine, 172).”

“The right to private property,” Pope Francis continued in Fratelli tutti, “can only be considered a secondary natural right, derived from the principle of the universal destination of created goods. This has concrete consequences that ought to be reflected in the workings of society. Yet it often happens that secondary rights displace primary and overriding rights, in practice making them irrelevant.”

The same topic was addressed in paragraph 93 of Laudato sí. Referring again to the Magisterium of Pope John Paul II, and commenting on his words, Pope Francis wrote, “The principle of the subordination of private property to the universal destination of goods, and thus the right of everyone to their use, is a golden rule of social conduct and ‘the first principle of the whole ethical and social order’ (Laborem exercens, 19). The Christian tradition has never recognized the right to private property as absolute or inviolable, and has stressed the social purpose of all forms of private property. Saint John Paul II… noted that ‘a type of development which did not respect and promote human rights – personal and social, economic and political, including the rights of nations and of peoples – would not be really worthy of man (Sollicitudo rei socialis, 33). He clearly explained that ‘the Church does indeed defend the legitimate right to private property, but she also teaches no less clearly that there is always a social mortgage on all private property, in order that goods may serve the general purpose that God gave them’ (Address to Indigenous and Rural People, Cuilapán, Mexico [29 January 1979], 6). Consequently, he maintained, ‘it is not in accord with God’s plan that this gift be used in such a way that its benefits favour only a few’ (Homily at Mass for Farmers, Recife, Brazil [7 July 1980]. This calls into serious question the unjust habits of a part of humanity (Cf. Message for the 1990 World Day of Peace, 8).”

On two occasions – in the letter Sertum laetitiae, addressed in November 1939 to the American bishops; and later in the Radio Message of 1 June 1941 on the occasion of the 50th anniversary of the encyclical Rerum Novarum – Pope Pius XII had earlier dwelt on the use of material goods, and had affirmed that it was “an indispensable requirement that the goods created by God for all men should flow equally to all, according to the principles of justice and charity.” Mention should also be made of the Apostolic Constitution Exsul familia (1952), which recalls the principle of the universal destination of goods in the context of migration. In fact, Pope Pius wrote that migratory movements permit “the most favourable distribution of people on the surface of the earth, a surface which God created and prepared for the use of all.”

In 1961 John XXIII commemorated the social teaching of his predecessors with the encyclical Mater et Magistra. With regard to private property and its social purpose he wrote: “This does not mean that the doctrine of the social function of private ownership is out of date, as some would maintain. It is inherent in the very right of private ownership. Then, too, a further consideration arises. Tragic situations and urgent problems of an intimate and personal nature are continually arising which the State with all its machinery is unable to remedy or assist. There will always remain, therefore, a vast field for the exercise of human sympathy and the Christian charity of individuals.”

It would then be the conciliar Constitution Gaudium et spes, published in 1965 at the conclusion of the Second Vatican Ecumenical Council, that clearly formulated the principle of the universal destination of goods: “God intended the earth with everything contained in it for the use of all human beings and peoples. Thus, under the leadership of justice and in the company of charity, created goods should be in abundance for all in like manner” (para. 69).

Two years later, in 1967, Paul VI published the encyclical Populorum progressio, linking the social Magisterium to the great tradition of the Fathers of the Church: “‘He who has the goods of this world and sees his brother in need and closes his heart to him, how does the love of God abide in him?’ (1 John 3:17) Everyone knows that the Fathers of the Church laid down the duty of the rich toward the poor in no uncertain terms. As St. Ambrose put it: ‘You are not making a gift of what is yours to the poor man, but you are giving him back what is his. You have been appropriating things that are meant to be for the common use of everyone. The earth belongs to everyone, not to the rich’ (De nubate, c. 12, n. 53). These words indicate that the right to private property is not absolute and unconditional. No one may appropriate surplus goods solely for his own private use when others lack the bare necessities of life. In short, ‘as the Fathers of the Church and other eminent theologians tell us, the right of private property may never be exercised to the detriment of the common good.’ When ‘private gain and basic community needs conflict with one another,’ it is for the public authorities ‘to seek a solution to these questions, with the active involvement of individual citizens and social groups.’”

Finally, it is worth recalling number 48 of the encyclical Caritas in veritate of Benedict XVI, which connects the principle of the universal destination of goods to the environmental question, including future generations among the recipients of the goods of creation and the consequent task of safeguarding and cultivating creation without plundering it: “Today the subject of development is also closely related to the duties arising from our relationship to the natural environment. The environment is God’s gift to everyone, and in our use of it we have a responsibility towards the poor, towards future generations and towards humanity as a whole.”

Share on FacebookShare on TwitterShare on PinterestShare on EmailShare on LinkedIn
Cardinal Cassidy, Vatican's former top ecumenist, dies at 96Who will Joe Biden send to Rome? 8 top contenders for U.S. ambassador to the Vatican