Home Test page The Message and the Man: A review of Pray: The Story of Patrick Peyton

The Message and the Man: A review of Pray: The Story of Patrick Peyton 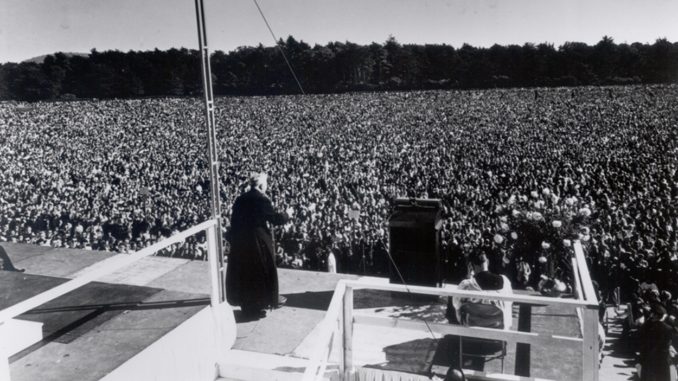 Prior to seeing this documentary, which opens in theaters on October 9th, I knew nothing about Fr. Patrick Peyton. This is surprising considering that in the 1950s and 60s, his popularity rivaled other prominent American evangelists such as Fulton Sheen and Billy Graham. Pray is a stellar journey through the meteoric rise and subtle plateau of a man who became known as “the rosary priest.” On December 18, 2017, Pope Francis declared him “Venerable.” I used to think Sheen was a shoo-in for the first male American-born saint, but it looks like he now has stiff competition. 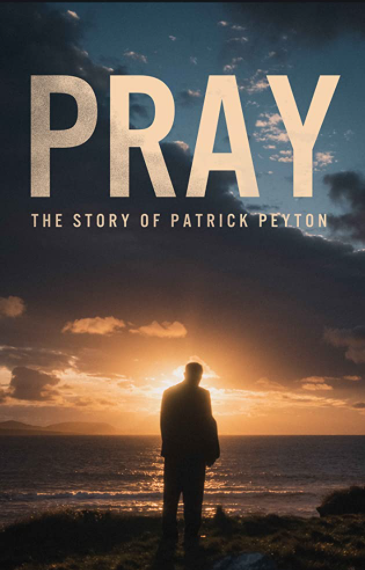 Young Patrick grew up just prior to the Great Depression in a loving Irish family. His parents were models of what Pope St. John Paul II called “a domestic seminary.” His mother raised nine children at home, while his father worked hard all day on the farm. They attended church regularly and prayed the rosary together as family. Despite this holy upbringing, Patrick was stubborn and unruly, wanting more than his station would allow. To this end, he immigrated to New York at nineteen to start at new life.

While in America, he entered the seminary for the Congregation of the Holy Cross. In 1938, he contracted tuberculosis and was near death for weeks. During this time, he began a devotion to Mary through the rosary and was miraculously cured, his lungs showing no sign of the disease overnight. He committed the rest of his life to helping the family through prayer, with the rosary being the chief weapon in his spiritual arsenal.

Today, many clergy are often tempted to speak out on every hot button issue imaginable. If a bishop does not tweet about the latest event or trend, he risks being labeled distant, out of touch, or lacking courage. But in his fifty years of ministry, Fr. Peyton never made a political statement or endorsed a candidate. He never even wrote a book. He just gave presentations on the importance of family prayer and then proceeded to lead his audience in that same prayer. He especially wanted people to pray the rosary, as Mary provides the ideal model of Christian devotion and discipleship.

Fr. Peyton did not discriminate in the media he used. He started on radio in the 1940s by cold-calling celebrities including Shirley Temple and Bing Crosby, asking them to give short testimonies and lead the audience in prayer. They rarely turned him down. Eventually, he moved onto television and began to hold large prayer rallies. In some places—San Francisco and the Philippines—these gatherings numbered north of a million people.

At the height of Fr. Peyton’s success, the world began to change. With the counterculture of the 1960s, mainstream society moved away from, or even looked down upon, public expressions of faith. Even Catholics began to abandon more traditional forms of prayer. As his audience dwindled, Fr. Peyton didn’t flinch. He continued to advocate family prayer and the rosary, being just as comfortable with an audience of ten as ten thousand. He would often compare himself to a “donkey”—a slow, simple beast who was just happy to be of service.

His humility is astounding, even startling, especially compared to today’s many cults of personality. He and Fred Rogers may be the only television stars who refused to update their message to fit modern styles.

Even among the holiest of men, few earn the title “living saints” in their own time; Mother Teresa and John Paul II are the most prominent examples. Yet here was another, working virtually unknown in our own backyard.

If Fr. Peyton were alive today, there is no doubt that he would be using social media to preach about family prayer and rosary. But if the culture cancelled him, I don’t think he would care. He would keep on preaching and praying, letting God choose the manner of his influence. The message was more important than the man, and that is the mark of a true saint.

• Pray: The Story of Patrick Peyton opens in theaters on October 9th. For more on the film, see “New film presents the story and message of Fr. Patrick Peyton, the ‘Rosary Priest’” (March 9, 2020) by Jim Graves.

Share on FacebookShare on TwitterShare on PinterestShare on EmailShare on LinkedIn
Why pro-lifers shouldn’t give up on the Supreme CourtFratelli Tutti is a familiar mixture of dubious claims, strawmen, genuine insights