The little known and often-surprising history of Catholic Confederates

There exists a stereotypical image of the American South as a militantly Protestant and strongly anti-Catholic environment. Gracjan Kraszewski’s fascinating book Catholic Confederates: Faith and Duty in the Civil War South should do much to change that image, as it shows the integral role that Southern Catholics played in promoting the Confederate cause during the Civil War. 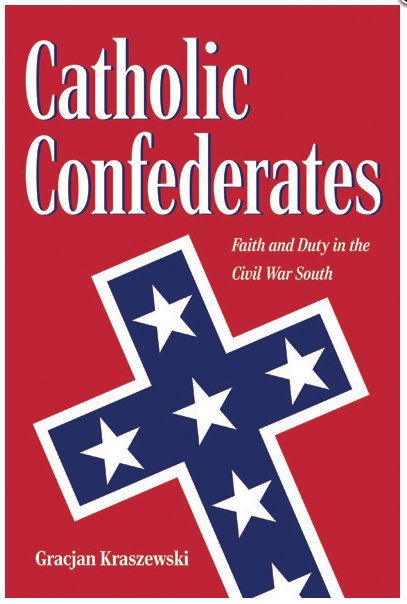 While the large waves of immigration into northern cities ultimately ensured that the majority of Catholics would be in the north, it is often forgotten that there existed a Catholic South prior to a Catholic North. Much of the South had been colonized by the French and Spanish prior to its incorporation into the United States. Several leading Confederates were Catholics including Secretary of the Navy Stephen Mallory and General Pierre Beauregard who led the attack on Fort Sumter that opened the conflict. Confederate president Jefferson Davis, though a Protestant, had been educated by Dominicans and had a lifelong sympathy for the Church.

Kraszewski states that the ultimate subject of his book is what he calls the ‘confederatization’ of Catholics in the South. The ‘confederatization’ thesis he says, challenges ‘the assertion that Catholics did not assimilate into American society until long after the Civil War and, especially, that they were not integrated members of nineteenth-century Southern society.’ He states:

The Confederatization thesis adds to the full meaning of Americanization, showing that more than one hundred years before Vatican II and JFK, Catholics in the South were fully integrated members of society who, save for their religion, believed the same things as and acted in similar fashion to their well-known Protestant neighbors.

Attitudes of the Southern Bishops

Kraszewski describes in considerable detail the attitudes of the Southern Catholic bishops toward secession, the war and the controversial issue of slavery.

While all the bishops were orientated toward a peaceful solution to the North-South divide and the Catholic Church in America never underwent the kind of splits into Northern and Southern wings that occurred in several Protestant groups, all the bishops accepted secession once it had occurred and most became enthusiastic supporters of the Southern cause. While the bishops were careful not to bring politics into the pulpit, Kraszewski writes:

Bishops would discover that their roles as religious leaders often became inextricably entwined with political issues. Each bishop faced this reality uniquely, and as such the bishops’ responses to secession differed somewhat. Yet all, with one debatable exception, were Confederate supporters.

The most ardent Confederate partisan was Bishop Patrick Lynch of Charleston, South Carolina. Following South Carolina’s secession, Lynch declared that the state “henceforth not only our Mother but our only Sovereign, who has sole right to our allegiance.” Lynch believed secession justified by four factors: ‘abolitionist agitation, Northern violations of constitutionally guaranteed state sovereignty, the inflammatory and disunion-catalyzing speeches of Northern senators, and, finally, its economic benefits for the South.’ He ordered that a Te Deum be sung following the fall of Fort Sumter. Lynch would later be appointed as a diplomat by Jefferson Davis in which role he would embark on an unsuccessful mission to Rome in an attempt to obtain Vatican recognition for the Confederacy.

What were the bishops’ attitudes toward slavery? It would appear that most of the Southern bishops did not question the existence of slavery as an institution but argued that slaves must be granted certain basic rights. This is the position taken in an 1861 tract written by Augustin Verot, bishop of Savannah, Georgia. Whilst stating that slavery had received ‘the sanction of God’, Verot echoed Pope Gregory XVI’s 1839 declaration that the trade-in slaves was immoral. Kraszewski summarizes the contents of Verot’s tract:

… slaves held a range of inalienable human rights. A master could not make a claim on a slave’s life or soul, only his labor. Masters could not exploit their slaves sexually. Slave marriages were legitimate and had to be unconditionally respected … Slave families were sacrosanct. “Families ought never to be separated, when once established,” Verot wrote. “It is unreasonable, unchristian, and immoral to separate a husband from his wife and children and to sell the husband North, and the wife South, and the children east and West.” Masters’ other duties included providing slaves with lifelong food and housing, medical care, and the “means of knowing and practicing religion.” “This is a sacred, indispensible, burden of duty of masters,” Verot added, cautioning that “the neglect of which alone, if they had committed no other fault, would expose them to eternal damnation.”

A major controversy of the war involving a Catholic bishop was the refusal of William Henry Elder, bishop of Natchez, Mississippi to offer public prayer for Abraham Lincoln. Following the occupation of Mississippi by the Union army, Special Order No. 31 was issued commanding “all Pastors of Churches to read a prayer expressive of a proper spirit towards the President of the United States.” Elder refused this, saying that it represented a political imposition on the liturgy of the Church and that secular authorities had no right to impose content on religious services. In a letter to President Lincoln, Elder stated:

My resistance [to prayers for the Union] is based simply on the broad ground that our Church Service is a matter to be regulated exclusively by the authorities of the Church… I have never attempted to influence the political opinions or conduct of the people under my care…They have devoted themselves to rendering spiritual services to all who desired them at their hands, without distinction of politics of section or of color.

Elder spent time in prison for his refusal but was subsequently released. Suffice to say his stance made him a hero in the South.

Kraszewski spends considerable time describing the work of Catholic chaplains to the Confederate army as well as the spiritual lives of the soldiers. He has selected particular individuals, most of whose names will be unknown, but whose story is followed throughout the book. His descriptions of the interactions of the chaplains and soldiers are often moving. His chapter on the work of the Catholic ‘sister-nurses’ is particularly evocative, especially his descriptions of how they changed the lives of countless soldiers.

Unlike the priests and soldiers, most of whom were strong Confederate partisans, the sister-nurses had little interest in politics. Yet as Kraszewski notes:

While they treated men from both sides without discrimination, they were nominally part of the larger Confederate apparatus. This testifies to the nearly complete Southern Catholic involvement in the Confederate nation, even when that involvement was their unique “participation without politicization”.

The sister-nurses were particularly effective at dispelling anti-Catholic prejudices among many soldiers. One Catholic soldier wrote that he believed ‘the nuns’ presence among non-Catholics was among the best evangelical tools the Church possessed’. Kraszewski writes:

A Protestant soldier, reflecting on his interactions with sister-nurses, wrote, “I am not of your church, and have always been taught to believe it to be nothing but evil; however, actions speak louder than words, and I am free to admit that if Christianity does exist on earth, it has some of its closest followers among the Ladies of your Order.” Another Protestant soldier once “wept aloud” when learning that the sister who had been caring for him was a Catholic, but his prejudices soon vanished and he resolved to take as many books about Catholicism back to the battlefield with him as he could for the purpose of learning about the faith.

The example of the sister-nurses led many who despised Catholicism to subsequently convert to the Faith.

One of the most fascinating chapters in this book deals with relations between the Confederacy and the Vatican. Pope Pius IX’s attitude to the Civil War was one of neutrality. He had some sympathy for the Confederacy but his main concern was for peace as he expressed in a joint letter addressed to both Archbishop Jean-Marie Odin of New Orleans, a Confederate partisan, and Archbishop John Hughes of New York, a leading partisan for the Union.

Nonetheless, the Confederacy made a great effort to obtain recognition from the Vatican. The Confederate government appointed Bishop Lynch as a diplomat with a salary of $1000 per month plus an extra $500 for expenses. Though Pius never gave official recognition to the Confederacy and received Lynch as a bishop rather than as a state representative, he did write a letter to Davis addressing him as ‘Illustrious President’ and acknowledged in speaking to Lynch that the North and South were ‘two nations’. Pius offered to act as an umpire between the two sides and, addressing the issue of slavery, endorsed a gradualist approach to its elimination. Indeed, it appears to have been the slavery issue that posed the main barrier to international recognition of the Confederacy.

Kraszewski does highlight one interesting area where the Confederacy’s foreign missions did lead to some success. This was the mission of Father John Bannon to Ireland. Bannon’s mission was to convince Irish Catholics that the Confederacy was their natural ally. He depicted the South as a remnant of Christian civilization. The North, he said, were the descendants of Cromwell and the Puritan witch-hunters, steeped in anti-Catholic Know-Nothingism. His words fell on receptive ears. According to Kraszewski:

Bannon was well received in Ireland … was invited all over the country to preach and explain the Confederate position. An Irishman who heard Bannon said, “We who were all praying for the North at the opening of the war would willingly fight for the South if we could get there.” …John Martin…of the Young Ireland ’48 movement, wrote, “I am heart and soul a partisan of the Confederates in this war. These sentiments are the sentiments of the great majority of the people of Ireland,” adding, “the South has the right of self-government as clearly as the Belgians, Italians, Poles, or the Irish.”

Kraszewski has produced a fascinating, scholarly book on a little-studied subject. The book contains an interesting collection of photos of the leading Catholic Southerners and useful biographical sketches. A vivid picture is drawn of a wide variety of Catholic Confederates: priests, bishops, soldiers and sister-nurses. With 32 pages of detailed footnotes and a very thorough bibliography, this book would serve as a good introduction to anyone wanting to explore the role of religion in the American Civil War.