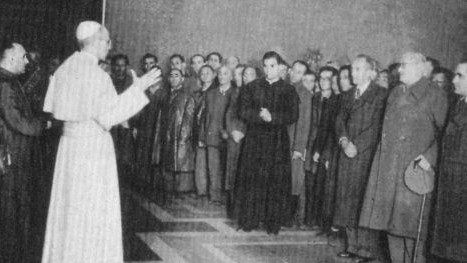 Transgressing orders from superiors changes the ancient Latin adage into its opposite: Ubi minor maior cessat. One paradoxical example of this can be found in newly-released Vatican documents.

During the Second World War, Bishop Ján Voitaššak, the bishop of Spiš with Nazi sympathies, was offered the position of State Councillor by the Slovak government. For his role, the bishop should have refused, but instead, he accepted, asking the consent of Pope Pius XII only ex post facto.

This is just one of the episodes in the book “Pius XII and the Jews” (Milan, Rizzoli, 2021, in bookstores in Italian as of 12 January) written by Johan Ickx, Director of the Historical Archives of the Section for Relations with States of the Vatican Secretariat of State.

The book opens a new era of studies on the pontificate of Pius XII, with an insight into what Ickx calls Le Bureau (the title of the French edition of the book). The title refers to the first Section of the Secretariat of State responsible not only for international relations but also, in an increasingly dramatic way, for the vicissitudes of the many Jews who, during the Second World War, turned to the Vatican for help, support, advice and protection.

Conversion no guarantee of survival

A first fact is evident from the papers: conversion to Catholicism for Hitler and his followers did not change a Jewish person’s blood; converting to be considered “non-Aryan” was not a guarantee of survival.

The Bureau knew these facts and knew that Germany boasted numerous imitations. Slovakia, for example, had chosen a totalitarian path: “Baptized or not,” said Minister Mach, “all Jews will have to leave.” German pressure then induced the Hungarians to hand over to the Germans those Jews who tried to cross the border from Slovakia.

The Slovakian bishops wrote a collective denunciation fully supported by the Pope. But, even in this case, the opposite of the old adage was true: “The trouble is that the president of Slovakia is a priest,” wrote Msgr. Tardini. “Everyone understands that the Holy See cannot keep Hitler in line. But that it cannot keep a priest in check, who can understand that?” Ubi minor maior cessat.

These were very serious situations in which “there was very little that the members of the Bureau could do to punish the guilty.” This fact can be seen in the dispatches of Msgr. Burzio, chargé in Bratislava, regarding his conversations with Prime Minister Tuka: “Is it worthwhile for me to continue to report to Your Eminence the continuation of my conversation with a demented person?”

The stories told in this book must therefore be understood as stories of people fleeing, but also like stories of attempts, made with human strength and human limitations, to save these fleeing lives. In this way, some superficial theses, even some recent ones, put to rest allegations of anti-Semitism of the Curia under Pius XII.

“The Jews” is the name of the series of documents enclosed in 170 alphabetically-ordered entries, totalling about 2,800 cases. In the Bureau, “Cardinal Maglione had the general command of both sections. It cannot be excluded that the other section had its own register or filing system, which would mean that other archives of the Holy See, such as the Apostolic Archives, kept similar material concerning the Jews.”

The existence of the series “The Jews”, which Ickx calls “The list of Pius XII”, is “tangible proof of the interest shown in people who, because of racist laws, were not considered ordinary citizens, whether they were Jews or baptized Jews.” It is not possible here to cite all the “Jewish cases” of which the Vatican was notified. But, it can be said that the documents clearly show, as Ickx writes, that the Vatican’s efforts were aimed at “saving every single human being, regardless of colour or creed.” Two very significant episodes prove this, among those enumerated by the book’s author.

The first is found in the chapter entitled “Brief History of a Pitiful Case”.

It regards the couple Oskar and Maria Gerda Ferenczy, Austrian Catholics of Jewish origin, who emigrated from Austria after the Anschluss. Along with their daughter Manon Gertrude, they moved to Zagreb, assisted by the Archbishop of the city, Msgr Stepinac. But in 1939 the local authorities, already leaning toward Nazism, reject all foreign Jews, converted or not, at the Italian border. The Ferenczys go to Opatija, in the province of Rijeka.

At the height of her misery and despair, Maria Gerda wrote her first letter to Pius XII, in which she confessed to having sold her Bible for a piece of bread, and of her unsuccessful search for a passport to emigrate. The documents inform us that Pius XII personally read the letter. But, how to help the woman and her family? She had not expressed any wishes. Monsignor Dell’Acqua was invested with this “most pitiful case” and the bishop of Fiume, Monsignor Camozzo, was asked to take an interest in the Ferenczys. The situation worsened at the end of 1939 when the Ferenczys risked being handed over to the German authorities and deported to Poland.

In a second letter to the Pope, Maria Gerda begged him to avert the danger and renewed her request for help to emigrate. Once again, Dell’Acqua was invested with the matter and wrote a second time to Camozzo, who mysteriously had not replied to the first letter. Now, he was ordered to ask the Italian authorities for an extended residence permit for the Ferenczys. Inexplicably, Camozzo remained silent.

With tragic foreboding, Maria Gerda wrote a third letter to the Pope, renewing her appeals. “From the Historical Archives,” Ickx informs us, “it emerges that the Bureau did not stop following her case.” The situation precipitated with the arrest of Oskar Ferenczy and his transfer to a prison in Fiume. Upon learning the news, the Vatican instructed Dell’Acqua to prepare a letter for the Jesuit Tacchi Venturi, a privileged interlocutor of the Italian authorities. Meanwhile, on August 7th, Ferenczy learned from the Superior of the Sisters of Our Lady of Sion that visas for Brazil were perhaps available at the Vatican.

Maria Gerda then prayed by letter to the Pope to obtain visas for her family. The matter once more to Dell’Acqua’s attention. In the meantime, a subsidy of eight hundred liras was sent to the Ferenczy family. But the Brazilian Embassy to the Holy See had the final say on visas. The Bureau intervened and finally, on August 19, 1940, Cardinal Maglione was able to tell Maria Gerda Ferenczy that the visas had been granted. The worst seemed to have been overcome. However, once in Rio De Janeiro, the head of the family, Oskar Ferenczy, was prevented from disembarking because his visa was deemed invalid. It was the ship’s chaplain who telegraphed the news to the Bureau, asking it to intervene. The Holy See immediately sent a cable confirming the validity of the visas to the Brazilian authorities. Thus began a new life for the Ferenczys.

This case is an example “of how baptized Jews found themselves literally trapped and crushed between their two identities” since, as the racial laws became more stringent, “the distinction between Jews and baptized Jews was lost.”

Another symbolic episode is in the chapter entitled “Brief history of a common man and an eight-year-old girl”.

The ordinary man (according to his self-definition) was Mario Finzi, who worked in the Bologna section of Delasem (Delegation for the Assistance of Jewish Emigrants). In August 1942, Finzi wrote directly to Pius XII, asking him to intervene with Christian charity “to save a poor eight-year-old creature threatened by the hatred and ferocity of men.” She was Maja Lang, a little Yugoslavian girl who had a seventeen-year-old brother, Wladimir, who was under house arrest in a villa owned by the real estate developer Alfonso Canova, in Sasso Marconi. Wladimir had asked Finzi to save his little sister. The family had been arrested in Croatia and the little girl, with an expired permit to stay in Hungary with an aunt, risked being taken back to the Croatian border. Aware of the risks Maja was running, Finzi devised a plan that he submitted directly to the Pope: to ensure that the child reached Italy to be reunited with her brother Wladimir.

But, to obtain this, the Holy See would have to interact directly with the Italian Ministry of Foreign Affairs, which could have alerted its representative in Budapest. “Holy Father, I know that what I dare to ask of you is no small matter,” wrote Finzi to Pius XII, “but to operate in a Christian manner in a world that in such a large part is the negation of Christ is not an easy task for ordinary men.”

The Vatican wasted no time. Having received the necessary instructions, in January 1943, Father Tacchi Venturi succeeded in obtaining from the Italian Ministry of the Interior a residency permit allowing little Maja and her parents to stay in Sasso Marconi. The order from the Italian authorities appeared in time to save the life of the entire family. But, at a certain point, the traces of little Maja are lost.

Unfortunately, Maja died in the Lager, according to the archives of Yad Vashem. “In any case,” writes Ickx, “her case sheds light on an interesting perspective.” Namely, that “Dr Finzi of Bologna considered Pope Pius XII the only authority still capable of successfully intervening in such a complex and surprising humanitarian case.” Mario Finzi, a young “common man” with a heart of gold, was arrested and deported to Auschwitz but was later liberated before dying an early death due to an illness contracted in the Lager. The Langs returned to Yugoslavia in 1945, eventually moving to Israel three years later. “Together with the local heroes of Sasso Marconi, whose memory is honoured by Yad Vashem [Alfonso Canova is amongst the “Righteous among the Nations” editor’s note], and an ordinary Jew, Mario Finzi, a victim of Nazi terror, Pius XII and the Bureau saved a family.”

A new wave of studies

This book, therefore, opens a new season of studies, that sweeps away former and current ideological prejudices and dismantles the idea that Pope Pius XII was unaware of—and not the head of—an aid network which helped Jews and refugees, a network which was very complex but delineated by clear contours.

Ickx’s book represents a great step towards a “historiographic democracy” desired by many: “The List of Pius XII”.

FacebookTwitterPinterestEmailLinkedIn
Samantha Power, Joe Biden’s pick to head up humanitarian aid, is a fan of Pope Francis and Dorothy DayWhat will it take to end to the death penalty? Catholic activists say a more visceral approach is needed.