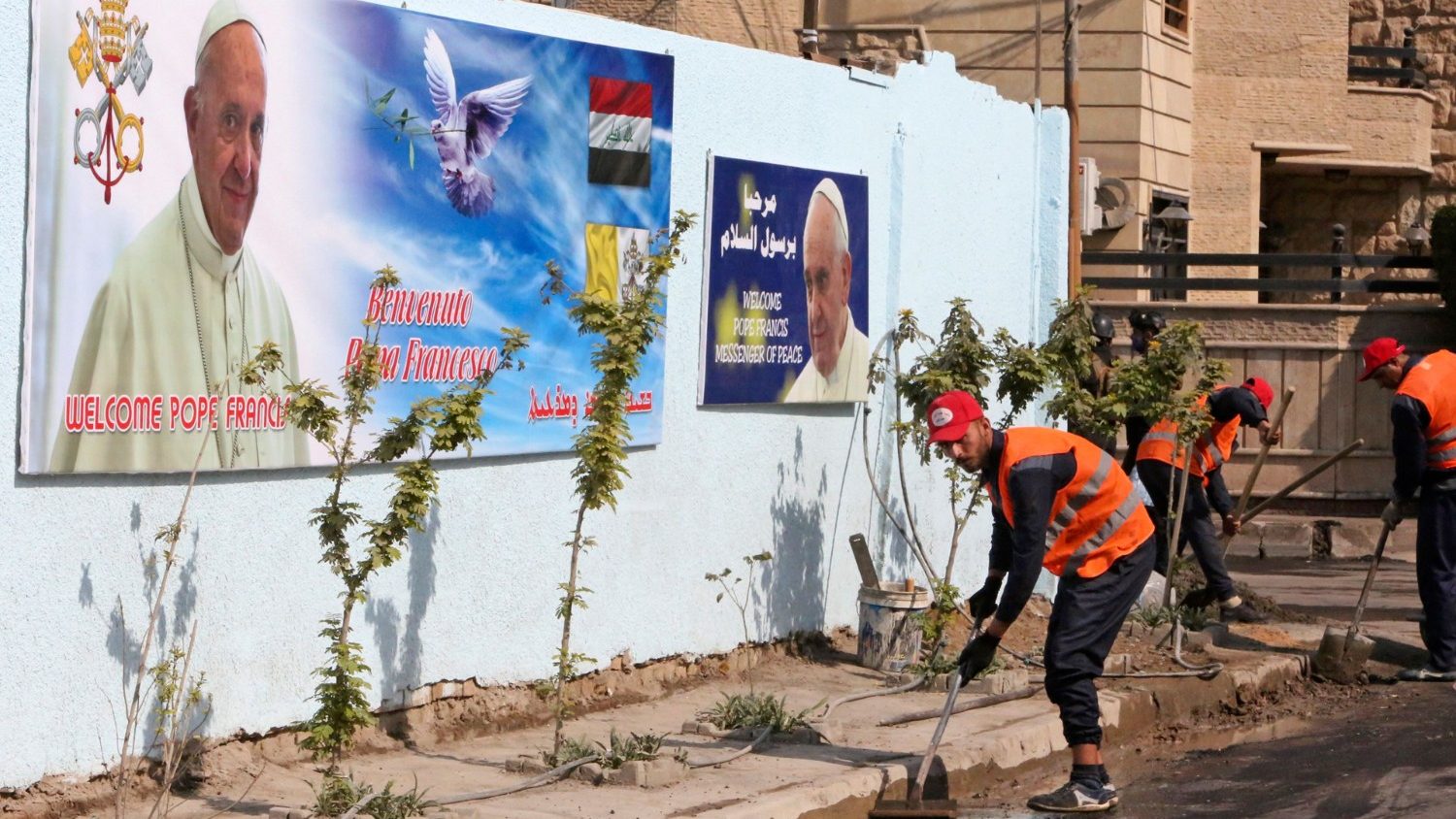 Pope Francis’ Apostolic Journey to Iraq is scheduled for 5 – 8 March. This historic, first-ever papal visit to the middle eastern country marks the Holy Father’s first foreign trip after a 15-month gap due to the ongoing Covid-19 health emergency. Many people hope the Pope’s presence will bring much-needed hope to the country’s beleaguered Christian communities and will be an occasion for further promoting interreligious efforts.

Iraqi-born Father Rebwar Basa is entrusted with the pastoral care of approximately 1,300 Iraqi/Chaldean Christian families in the North Rhine-Westphalia State of Germany. He is one of only five priests serving the more than 8,000 Iraqi families in Germany. Many of these families had to flee from their country to save themselves from war and persecution. In June 2020, Fr Basa’s community in Essen moved from the Chaldean Parish of St. Addai and St. Mari to St. Nikolaus.

Father Basa is also the author of “A Catholic Priest in the Islamic State,” a biography of Fr Ragheed Aziz Ganni, who, along with three subdeacons, was killed by armed men at a Chaldean Catholic Parish in Mosul in 2007.

As Iraqi Christians prepare to welcome the Holy Father on Friday, Fr Basa reflects on the importance of the Pope’s visit to Iraq, and the hopes of Iraqi Christian communities in the diaspora.

Anticipation with joy and concern

Father Basa said he shares in the joy of the Iraqi Christian communities in Germany who are looking forward to the Pope’s visit to Iraq, especially because this is the first-ever visit of a Pontiff to the land of Mesopotamia. However, while expressing the community’s desire to be physically present in Iraq for the visit, he blames the Covid-19 pandemic situation and its consequent travel restrictions for the community’s inability to be there. The many Iraqi Christians who cannot travel will have to follow the Pope’s visit on television or via other means.

At the same time, however, he expresses concern about the situation of instability in the country as the Pope visits, noting that “there are so many conflicts, so many problems, so many militias and every day there are attacks, missiles that are launched here and there.”

“We accompany him with our prayers and we pray to the Lord that the Holy Father, as a messenger of Peace, may bring much peace to Iraq and may go in peace and return in peace from Iraq,” Fr Basa said.

He also expressed hope that the Pope’s visit may open up a “path of dialogue, of great will to rebuild Iraq” for it to come out of its conflicts and begin “an era of peace and brotherhood.”

A country of historic faith amid trials

Fr. Basa says Iraqi Christians are original peoples, tracing their faith back to the first centuries of Christianity thanks to the evangelization of St Thomas the Apostle. He notes that this faith is maintained even to these present times.

Unfortunately, this historic Christian community has been greatly diminished due to wars and persecution suffered under the rule of the so-called Islamic State between 2014 – 2017, during which thousands of people were killed, and hundreds of thousands more were forece to flee their homes.

Fr Basa notes, however, that the lives of Iraqi Christians in Erbil and Northern Iraq in recent times have been quite stable, and they are able to serve as a welcoming community for other Christians

“In the city of Erbil alone, Christians have welcomed about 120,000 Christian brothers,” he said.

Fr Basa also acknowledges the aid efforts of the international community, aid organizations, and the Church, and the Holy Father, in particular, to the city of Erbil, as well as to the Church in northern Iraq. Their contributions went a long way in helping them welcome these Christians and assisting them to live “a dignified life, despite the persecution and the situation in which they lived.”

Far, yet linked in solidarity and unity

In light of the difficulties experienced by the Church in Iraq, there is often a need to lend support, both spiritually and otherwise, to the Christian communities.

As Iraqis, affirmed Fr Basa, “Iraq and our Church in Iraq are at the centre of our lives. We always remember Iraq in our prayers, in the Masses and we pray for peace.”

After prayer comes concrete help, continued Fr Basa. “Many times, as a community, we collect funds to help those in need in Iraq.” He added that the Christian community in Essen recently supported a new diocese in Iran; and even on a personal level, many families come to him to donate “something” to families in difficulty in Turkey, Lebanon and Jordan.

“Our Christians here in the parish and in the missions we have here in Germany are always in solidarity and unity with Iraq, with the Church and its people,” Fr. Basa said.

Share on FacebookShare on TwitterShare on PinterestShare on EmailShare on LinkedIn
Pope hopes 'Fratelli tutti' in Russian will help promote fraternityInvestigator: There could be 10,000 abuse victims in French Catholic Church since 1950