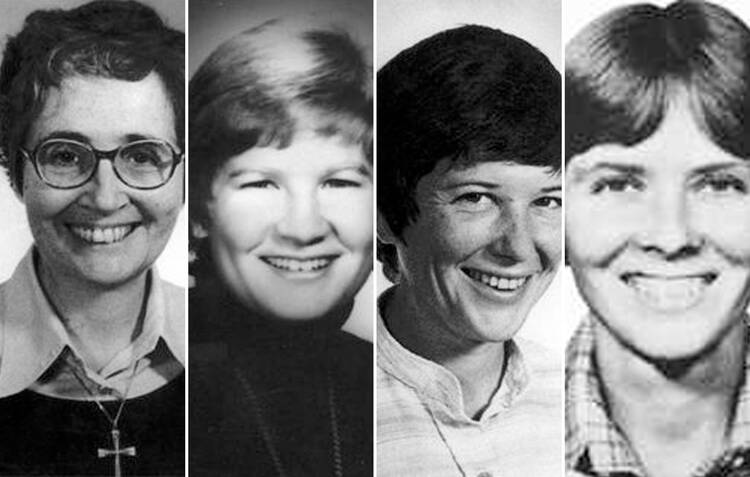 Last Friday marked the 42nd anniversary of the martyrdom of four American Catholic missionaries in El Salvador: Maryknoll sisters Maura Clarke and Ita Ford, Ursuline sister Dorothy Kazel, and Jean Donovan, a Maryknoll lay missioner. On Dec. 2, 1980, Clarke and Ford were returning from a Maryknoll gathering in Nicaragua and met Kazel and Donovan at the San Salvador airport. On their drive home, they were accosted by members of the Salvadoran National Guard, who abducted, raped and murdered all four. Their bodies were discovered two days later in a shallow grave.

“If Maura, the martyr, is like us—imperfect, thirsty for God, responding to the challenges of her time and place as best she could—then perhaps we can be like Maura.”

The murders—on the heels of years of escalating violence and human rights violations by the military against civilians in the war-torn country—produced public outrage in El Salvador and in the United States. In his final days in office, President Jimmy Carter suspended all economic and military aid to the government of El Salvador, which had been fighting for years with American weapons paid for with American dollars. Because many priests, nuns and lay missionaries were advocates for the poor in El Salvador and critical of the government, they were seen as political enemies by right-wing groups and government supporters; one military slogan circulating at the time was “haz patria, mata un cura”—“be a patriot, kill a priest.”

Though the Salvadoran government claimed right-wing extremists were to blame, members of the Salvadoran National Guard were later convicted of the crime—amid widespread assumption that high-level figures in the Salvadoran military had ordered the attack. In 1993, a United Nations Truth Commission report concluded that Carlos Eugenio Vides Casanova, the director of the National Guard in 1980, and José Guillermo García, the minister of defense in 1980, had organized an official cover-up of the government’s involvement in the murders.

“El Salvador had become a very dangerous place to be a missioner,” Margaret Swedish wrote in a 2020 essay for America. “Repression from the military and its allied paramilitary death squads had become savage and widespread by 1980. Student activists, human rights workers, labor and campesino organizers and political opposition leaders were all being targeted. Bodies were turning up in ditches along roadsides, in garbage dumps or floating in rivers, often with thumbs tied behind their backs. Catechists, lay missionaries, priests and other pastoral workers were being threatened and killed.”

Swedish selected a quote from the letters of the four women, all of whom were experienced mission workers, to show that in some ways they knew the danger facing them, but their faith and commitment drove them to stay in El Salvador anyway:

“If we abandon them when they are suffering the cross, how can we speak credibly about the resurrection?” -Maura Clarke, M.M.

“Most of us feel we would want to stay here.… We wouldn’t want to just run out on the people.” -Dorothy Kazel, O.S.U.

“Several times I have decided to leave El Salvador. I almost could, except for the children.” -Jean Donovan

“I truly believe that I should be here, and I can’t even tell you why.… All I can share with you is that God’s palpable presence has never been more real.” -Ita Ford, M.M.

The Salvadoran government had its supporters in the United States, however, and they were eager to provide cover for those responsible. Jeane J. Kirkpatrick, who would soon become the U.S. ambassador to the United Nations under newly elected Ronald Reagan, argued that “these nuns were not just nuns, they were political activists.” A year later, U.S. Secretary of State Alexander Haig claimed in testimony before the House Foreign Affairs Committee that the four women had tried to run a roadblock and were killed in a shootout.

Secretary of State Alexander Haig claimed before the House Foreign Affairs Committee that the four women had tried to run a roadblock and were killed in a shootout.

The editors of America responded quickly after the bodies of the four churchwomen were found, writing in a Dec. 20, 1980, editorial that while elements in the Latin American church had criticized the “excessive political involvement” of priests and nuns, “the four women whose lives were brutally taken in a cowardly attack on a road controlled by Government checkpoints could not be called political subversives by even the most stubborn reactionary.”

The four, the editors wrote, “were engaged in that oldest of Christian ministries, feeding the hungry and caring for the homeless, in this case the thousands of peasants uprooted from their homes by the bitter fighting that has raged in El Salvador over the past year.” Their work and their lives were a witness to the Gospel, and in death “they joined Archbishop Oscar Arnulfo Romero of San Salvador and other priests and leaders of Christian communities whose concern for the powerless has been, like the Gospel itself, a sign of contradiction to the powerful, and as a result have sealed with their blood their commitment to the poor of Jesus Christ.”

Numerous books have been written about the four martyrs in the years since, and the site where their bodies were found (now marked with a simple monument) remains a pilgrimage destination for Salvadorans and foreigners alike. (I was blessed with the opportunity to visit this holy site when in El Salvador for the beatification of St. Romero in May 2015).

In a 2016 America review of Eileen Markey’s biography of Maura Clarke, A Radical Faith: The Assassination of Sister Maura, Elizabeth Kirkland Cahill noted that modern martyrs like the four churchwomen offer us examples of people who can seem just like us; in most ways these martyrs had grown up in communities recognizable to most Americans. Markey “succeeds brilliantly at transforming the martyr Maura, symbol of ultimate Christian commitment, into a recognizable human being—incarnate, immediate and arresting in her individuality,” Cahill wrote. “And in doing so, Markey opens up all sorts of possibilities for us. Because if Maura, the martyr, is like us—imperfect, thirsty for God, responding to the challenges of her time and place as best she could—then perhaps we can be like Maura.”

“I fervently wish that a younger generation will come to know their story because it expresses a historical thread that runs through our history to this day,” Swedish wrote. “It runs to our southern border where hundreds of Central Americans are languishing in misery because we refuse to open our border to them and in the rise of anti-immigrant sentiment in recent years.”

In a memorial Mass in Rome on the 40th anniversary of the martyrdom of the four women, Dec. 2, 2020, Cardinal Michael Czerny, S.J., noted that even in death, the evangelizing efforts of the women continued. “Theirs, mysteriously but without doubt, is the triumph because vigorous, courageous acts of solidarity and compassion persist in dreadful, risky conditions,” he said. “Brutal claims failed and fail to stop the evangelizing.”

Margaret Swedish: “I fervently wish that a younger generation will come to know their story because it expresses a historical thread that runs through our history to this day.”

Our poetry selection for this week is “D., Gardening,” by Christian Wiman. Readers can view all of America’s published poems here.

In this space every week, America features reviews of and literary commentary on one particular writer or group of writers (both new and old; our archives span more than a century), as well as poetry and other offerings from America Media. We hope this will give us a chance to provide you more in-depth coverage of our literary offerings. It also allows us to alert digital subscribers to some of our online content that doesn’t make it into our newsletters.

Share on FacebookShare on TwitterShare on PinterestShare on EmailShare on LinkedIn
An ‘unbearable’ saint? Neocatechumenal Way’s Hernández remembered for virtues, vicesHundreds of fans of soccer legend Pelé pray in front of hospital for his recovery