Teaching children it isn’t “religion vs. science”, but “religion and science”

A new book took me back to my high school science days and reminded me about a very distressing study from five years ago. 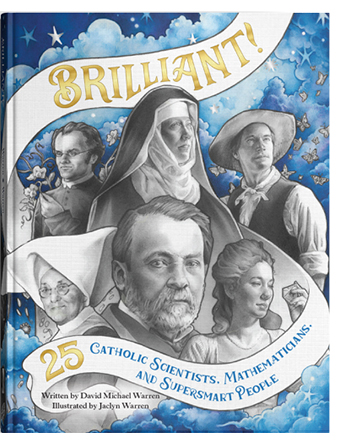 I was never very fond of science but did reasonably well – until chemistry in junior year under the rigorous demands of Sr. Mary Jordan. Sr. Jordan was a brilliant young teacher whose only fault was that she thought that everyone had both the interest and ability of Lavoisier, which was her launching pad for the course. I resented the class because it was the first time in my academic career that I actually had to study. The first marking period offered me another first – my first “C”. All these years later, I am still amazed at my “moxie” in approaching Sr. Jordan, “innocently” asking if the “C” in chemistry might have been a mistake. “Yes, Mr. Stravinskas,” came the swift retort, “it should have been a ‘D’ but I didn’t want to ruin your chances to be enrolled in the National Honor Society. However, the charity is only for this quarter, so buckle down.” The “buckling down” enabled me to earn (and really, earn) a “B” for the rest of the year.

When course selection for senior year came around, I studiously avoided physics, opting for typing instead. Our indomitable guidance counselor, Sr. Francis Rita, called me to her office, wondering if I had filled in the wrong box. “No, Sister, I don’t like science.” “You’re in the honors track and should be taking physics. Besides, typing is for girls!” Going home, I begged my mother to intervene; with great reluctance, she agreed (only the second time in thirteen years to go against the decision of a nun). Sister was as emphatic with my mother as with me, but my mother finally wore her down with the line: “Sister, Peter is entering the seminary next year; he’ll have more use for typing as a priest than physics.” Sister acquiesced.

With such anecdotes, the reader would be quite justified in learning that my attitude toward science changed dramatically through my time as a high school teacher and administrator. Which leads to the study reported on in 2016 by Matt Hadro on Catholic News Agency; the headline summarizes it clearly and painfully: “Why Catholics are leaving the faith by age 10 — and what parents can do about it.” Dr. Mark Gray, senior research associate at the Center for Applied Research in the Apostolate (CARA), guided the study which revealed the epidemic of apostasy among the youngest Catholics. According to Dr. Gray, most of these young “apostates” (and the word is not an exaggeration because they truly eschew all religious faith) find it impossible to reconcile what they are learning in science classes with Christianity.

Dr. Gray reports that “nearly two-thirds of those surveyed (63%) said they stopped being Catholic between the ages of 10 and 17. Another 23 percent say they left the Faith before the age of 10.” Nor should this be viewed as some kind of adolescent rebellion, for “only 13 percent said they were ever likely to return to the Catholic Church.”

While I consider the survey results truly distressing, I must say that I am not surprised at them B except perhaps for the youthfulness of the apostasy. However, there is also a bit of very good news in the report: Only 19% of the fallen-aways ever attended a Catholic elementary school, and fewer than 8% attended a Catholic high school. Putting it more starkly, 81% of the young apostates are the products of public elementary schools, while 92% of them come from public high schools.

Why am I not surprised? How could it be otherwise? The government schools are hotbeds of anti-religion B and have been for decades. Not only is religion generally ignored (thus making an institutional statement of its irrelevance), but when discussed, in all too many places it is pilloried as the cause of ignorance and war.

The book that grabbed my attention and interest? Brilliant! 25 Catholic Scientists, Mathematicians, and Supersmart People by David Michael Warren (attractively illustrated by Jaclyn Warrant) and published by the Daughters of St. Paul, in cooperation with the Word on Fire Institute. The target audience is elementary school children (but high schoolers wouldn’t be insulted by it). Each “supersmart” Catholic is presented in two or three pages in engaging prose, with no special pleading; the author simply lets the facts speak for themselves. A helpful Foreword by Dr. Christopher Baglow, director of the Science and Religion Initiative at Notre Dame University, sets the tone for the endeavor. We are treated to some of the usual personalities: St. Hildegard of Bingen; St. Albert the Great; Louis Pasteur; Louis Braille; Monsignor Georges Lemaitre. Lesser-knowns, like Blessed Nicholas Steno and Dr. Jerome Lejeune, also provide delightful reading. A very useful glossary rounds out the text.

This book should be a required supplemental text in every science class in every Catholic school. My only disappointment was that Galileo was not included. I am sure that the rationale for the omission was the controverted nature of the “Galileo Affair.” That said, I am equally sure that the author could have treated the matter with objectivity and honesty; not having Galileo is a gaping hole, suggesting that the predominant narrative is historically accurate (of late, many writers have done a credible job of presenting the full story).

Returning to the “distressing” study of five years ago. The data is clear that only a tiny minority of Catholic school alumni have forsaken Catholicism in their early years. Why is that the case? I can share several anecdotes which put flesh and blood on the assertion that, in our schools, faith and reason are friends and that religion and science are never perceived as enemies. As I have visited schools around the country to assist them in developing their “Catholicity quotient,” here are examples of what I have witnessed.

• In an elementary school, as the children are introduced to astronomy, they likewise study how stars feature in Sacred Scripture and pray the several psalms that deal with them.

• At the entrance to the science wing of a school, a life-size chart lists all the Catholic scientists in history (many of whom were clerics).

• In an opening lecture on the scientific method, the teacher (not a Catholic!) explored with the class the various ways of “knowing” or “coming to the truth.” The students identified modes of knowledge coming from theology, philosophy, art, music, love B and science. The teacher then reminded them that all these taken together bring one to the truth and that no one alone can fulfill the task.

• Some years ago, I had the pleasure of participating in a week-long seminar hosted by Dr. Christopher Baglow. That workshop brought together 25 pairs of religion and science teachers from Catholic high schools across the country as an occasion for practitioners of both disciplines to engage each other in conversation B and then to return to their schools to institutionalize their fledgling efforts. I should also mention that no Catholic school should lack Dr. Baglow’s wonderful synthesizing text on this topic: Faith, Science and Reason: Theology on the Cutting Edge (published by Midwest Theological Forum).

• As an advanced biology class completed a unit on genetics, the teacher distributed Donum Vitae, the 1987 document of the Congregation for the Doctrine of the Faith on “respect for human life in its origins and on the dignity of procreation.” Students entered into the discussion with intelligence and interest.

• After a chapter on fetology, a class was led to see that the Church’s abhorrence for abortion was grounded in sound, modern science.

• In a junior high class on evolution, the teacher skillfully wove into her presentation the various theories of evolution, the biblical data, and magisterial applications.

Now, I am sure that some readers will say, “That’s nice, Father, but not all Catholic schools are doing that.“

Let me respond in this way:

1. No, that is certainly true. However, it is happening with sufficient frequency that the data informs us that the hemorrhaging of Catholic youth from the Church over the science-religion conflict is not occurring in serious numbers among Catholic school students.

2. The scenarios I have depicted can be replicated in any Catholic school that wants to do so.

3. These scenarios cannot ever take place in any government school at any time.

Although I am delighted with Brilliant!, I am also glad that I took typing, instead of physics.

Share on FacebookShare on TwitterShare on PinterestShare on EmailShare on LinkedIn
Supreme Court Asked by Pro-Abortion Groups to Block Texas’ ‘Heartbeat Act’Individualism, relativism, and the most extreme form of idolatry