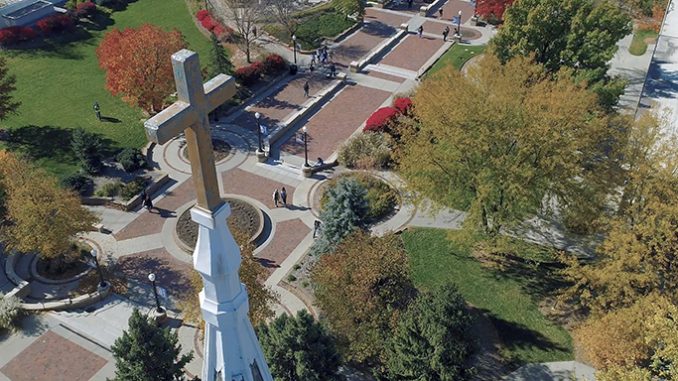 Four Creighton University students have sued the Jesuit-run university for its mandatory COVID-19 vaccine policy, which does not allow exemptions for sincerely held religious beliefs. One of the students, the president of Creighton Students for Life, said she was expelled for refusing to take the shots.

The four students — Lauren Ramaekers, Patrice Quadrel, Sarah Sinsel and Jane Doe — filed suit Sept. 8 in District Court of Douglas County, Nebraska. Creighton’s main campus is in Omaha. The women are seeking an injunction preventing the university from “un-enrolling” them for not taking the shots. Creighton policy requires proof of vaccination for all students, but not for staff. The students’ legal filing asks for an expedited hearing on the matter.

“Many students and parents are disturbed that a religious institution is not allowing religious exemptions,” said attorney Robert M. Sullivan of Wahoo, Neb., who represents the students. “The students suing Creighton have deeply and sincerely held opposition to the vaccine based on their religious beliefs.”

Sullivan sent a letter to Creighton President Rev. Daniel S. Hendrickson S.J. on Sept. 2, asking the school to make accommodations for his clients. Sullivan said he received no reply. “I must express the hope that instead of a summary denial, you can help these students continue their education at your institution, without forcing them to violate their own consciences, and without the unpleasant litigation which would follow,” Sullivan stated in the letter.

Ramaekers, who said she was scheduled to graduate in December 2021, was informed Sept. 9 that she was expelled from fall classes as of 7:30 a.m. Sept. 10. A letter from Tanya Winegard, Creighton vice provost for student life, informed Ramaekers she is banned from the campus and barred from registering for future courses. Fall classes at the 9,000-student university began Aug. 18.

The university announced a policy on July 7 requiring all students get the COVID shots. It offered a medical exemption and a temporary exemption while the shots were under emergency-use authorization from the federal Food and Drug Administration (FDA). No religious exemption was allowed.

Ramaekers was given a temporary exemption, a document that required her to get the vaccine once the FDA approved the shots. On Aug. 23, the FDA gave approval to the COVID-19 shot from Pfizer/BioNTech, which will be marketed under the name Comirnaty. The drug had been available since December 2020 under an FDA emergency-use authorization. The shots contain messenger RNA, a type of genetic material, to force the body to make a mimic of one of the proteins in the virus that causes COVID-19. On Aug. 31, Creighton reported that 93 percent of students were vaccinated against COVID.

In an affidavit, Ramaekers said as a Catholic, she finds “abhorrent” the use of fetal tissue, fetal cells or any product of abortion in the development or testing of a vaccine. “As part of my faith, I believe that abortion is an intrinsic evil, which must be avoided at all times and in all circumstances,” she wrote. “Even remote cooperation with abortion would violate my conscience, as I believe human life is sacred and that only God has the authority to determine when a life will begin and when it will end.”

A report from the Charlotte Lozier Institute said of the mRNA COVID vaccines developed under emergency authorization in the United States, those from Pfizer/BioNTech and Moderna used cell lines derived from abortions in some of the confirmatory lab testing. United States bishops have said those shots are morally permissible because of the remoteness of material cooperation in the evil of abortion. Johnson & Johnson and AstraZeneca used abortion-derived cell lines in their vaccine development and/or production, something much more morally problematic for Catholics.

The suit cited guidance from the Congregation for the Doctrine of the Faith (CDF), which said in a Dec. 21, 2020 document that “vaccination is not, as a rule, a moral obligation” and therefore “it must be voluntary.” The CDF document said if no “ethically irreproachable” vaccines are available, it is morally acceptable to receive vaccines that used cells lines from aborted children in research or production. Receiving vaccines in this circumstance “does not constitute formal cooperation with the abortion…”

The Creighton case is the latest indicator of the clash between COVID-19 regulations and religious liberties. A federal judge in Kalamazoo, Mich., issued a preliminary injunction against Western Michigan University and its policy requiring student athletes to get the COVID-19 jab. Sixteen Christian Western Michigan athletes sued the university for denying their petitions for religious exemption from the vaccine mandate.

United States bishops have provided disparate guidance on COVID-19 shots. The five bishops of Wisconsin issued guidance in August that said, “Nobody should violate the sanctity of conscience by forcing a person to do something contrary to his or her conscience.” The bishops of Colorado and South Dakota issued similar statements. Bishop Joseph E. Strickland of Tyler, Texas, condemned mandatory-vaccination edicts and said he will not take the COVID shots, no matter what mandates come along.

“I’m not going to take a vaccine that I believe is wrong,” Bishop Strickland said Sept. 9 on his radio program. He said people should have a well-informed conscience on the issues, but it is critical that no coercion be used with vaccines.

“Everyone should have the freedom to do that, to use their free will,” Strickland said. “If we enter into in any aspect of society where free will is taken away and mandates are just blanket, then we’ve lost something very important. More important than any specific vaccine or any specific question. We must stand for free will.”

Strickland said society must demand that the pharmaceutical industry develop ethical vaccines that don’t use the bodies of murdered children. “Aborted children have not just been aborted and slaughtered in the womb, but their bodies have been used over and over again and continue to be used for scientific research of all kinds,” he said. “We’ve got to say, ‘No.’ ”

A former deputy director of the federal Health and Human Services Office for Civil Rights decried the COVID vaccine mandates issued by President Joe Biden. “Coercing individuals into making a medical intervention is unjust,” said Louis Brown, now executive director of the Christ Medicus Foundation, in an interview with Catholic News Agency. “And a vaccine mandate that could cause millions of Americans to lose their jobs, to be excluded from large swathes of civil society – to become, effectively, second-class citizens – seriously undermines the principle of human dignity and the civil rights foundations of America.”

On the issue’s other extreme, Cardinal Blase Cupich said that all clergy and employees of the Archdiocese of Chicago must get the COVID shots. He instructed his priests not to issue religious-exemption letters to those requesting them.

Marquette University in Milwaukee, another Jesuit college, has a vaccine requirement for students, but it offers religious, medical and personal-conviction exemptions. Those who don’t vaccinate under exemptions must undergo regular COVID screenings and observe all of Marquette’s other mitigation protocols, according to the college’s web site. Marquette reported 92 percent of students enrolled for the fall semester are fully vaccinated against COVID.

In his letter to Creighton President Hendrickson, attorney Sullivan said the lack of clarity from Church leaders does not mean vaccine mandates with no exceptions are legal. “…While the faithful are forced to discern many matters without unified clarity from the Church and in this case, the medical experts, we can still look to civil law, which prohibits discrimination based on a disability or a religious belief,” Sullivan wrote, “and affords all of us equal protection under the law.”