St. Damien’s relatives speak up against criticism of his statue in U.S. Capitol 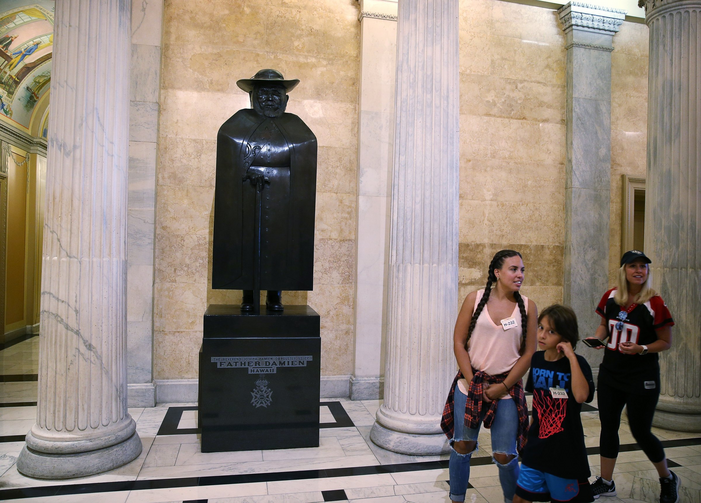 “Like many Belgians — fellow countrymen of Damien, who in 2005 elected him as ‘Greatest Belgian’ for his achievements at the other side of the world — we got a shock when reading in the newspaper that you chose, amongst the 102 statues in the U.S. Capitol’s National Statuary Hall Collection in Washington, the one of our relative, Father Damien, as a ‘typical example of white colonialism, patriarchy and white supremacist culture,'” the letter said.

Father Damien, a missionary of the Congregation of the Sacred Hearts, was assigned to the Hawaii mission in 1864. He spent the last 16 years of his life caring for the victims of Hansen’s disease, or leprosy, who were permanently quarantined in Kalaupapa, Molokai. He died of the disease in 1889 and was canonized a saint in 2009.

The letter was signed by Rob Van den Broeck and Herman Van Roost, chairman and representative of the Father Damien family association, respectively. Both are descendants of daughters of Father Damien’s brother Gerard de Veuster.

They said they would be sending the letter to newspapers in Belgium and the United States and providing additional background information about St. Damien and his statue.

Descendants of St. Damien’s 10 nieces and cousins, the children of his brothers Leonce and Gerard De Veuster, are all part of the Father Damien Family Association.

Ocasio-Cortez on July 31 said: “Even when we select figures to tell the stories of colonized places, it is the colonizers and the settlers whose stories are told — and virtually no one else. This is what patriarchy and white supremacy culture looks like!”

“Check out Hawaii’s statue,” she said, without mentioning Hawaii’s second statue of King Kamehameha I. “It is Father Damien. This isn’t to litigate each and every statue, but to point out the patterns that have emerged among the totality of them in who we are taught to deify in our nation’s Capitol: virtually all men, all white, and mostly both.”

The New York congresswoman said that a better choice would have been Queen Liliuokalani.

The queen had presented Father Damien with the Royal Order of Kalakaua, a high honor, for his work among the Hawaiians with leprosy.

Upon conferring the commendation she wrote: “I desire to express to you my admiration of the heroic and distinguished service you are rendering to the most unhappy of my subjects; and to pay, in some measure, a public tribute to the devotion, patience and unbounded charity with which you give yourself to the corporal and spiritual relief of these unfortunate people, who are necessarily deprived of the affectionate care of their relations and friends.”

The letter writers did not claim any authority to decide who should represent the 50th state in Statuary Hall but stressed that “nobody other than the Hawaiians themselves have the privilege to judge whether Damien still deserves to be their first representative in the Statuary Hall of the U.S. Capitol in Washington, or to prefer a native Hawaiian queen: not our family association, but also not a U.S. representative from New York!”

The family members also pointed out that the “final Hawaiian choice for Damien in 1965 was very thorough, with the widest possible popular support, with opposing consideration of all counter-arguments and without any exclusion of female native Hawaiian personalities.”

Others in the running when Father Damien was picked in 1965 to represent Hawaii included native Hawaiians Prince Jonah Kuhio Kalanianaole, King Kamehameha I, who was also chosen, Bernice Pauahi Bishop and the early Hawaiian Christian Henry Opukahaia.

The writers expressed gratitude to Ocasio-Cortez “for reviving the worldwide attention for our famous relative. Your perfect sense of timing in this COVID-19 era allows us to explain his achievement like never before. Now the U.S. Capitol in Washington will receive visitors who come exclusively to salute the statue of Father Damien.”

FacebookTwitterPinterestEmailLinkedIn
Can Ignatian spirituality teach us to engage prayerfully in civic life?Rochester bishop calls for solidarity after Daniel Prude’s death