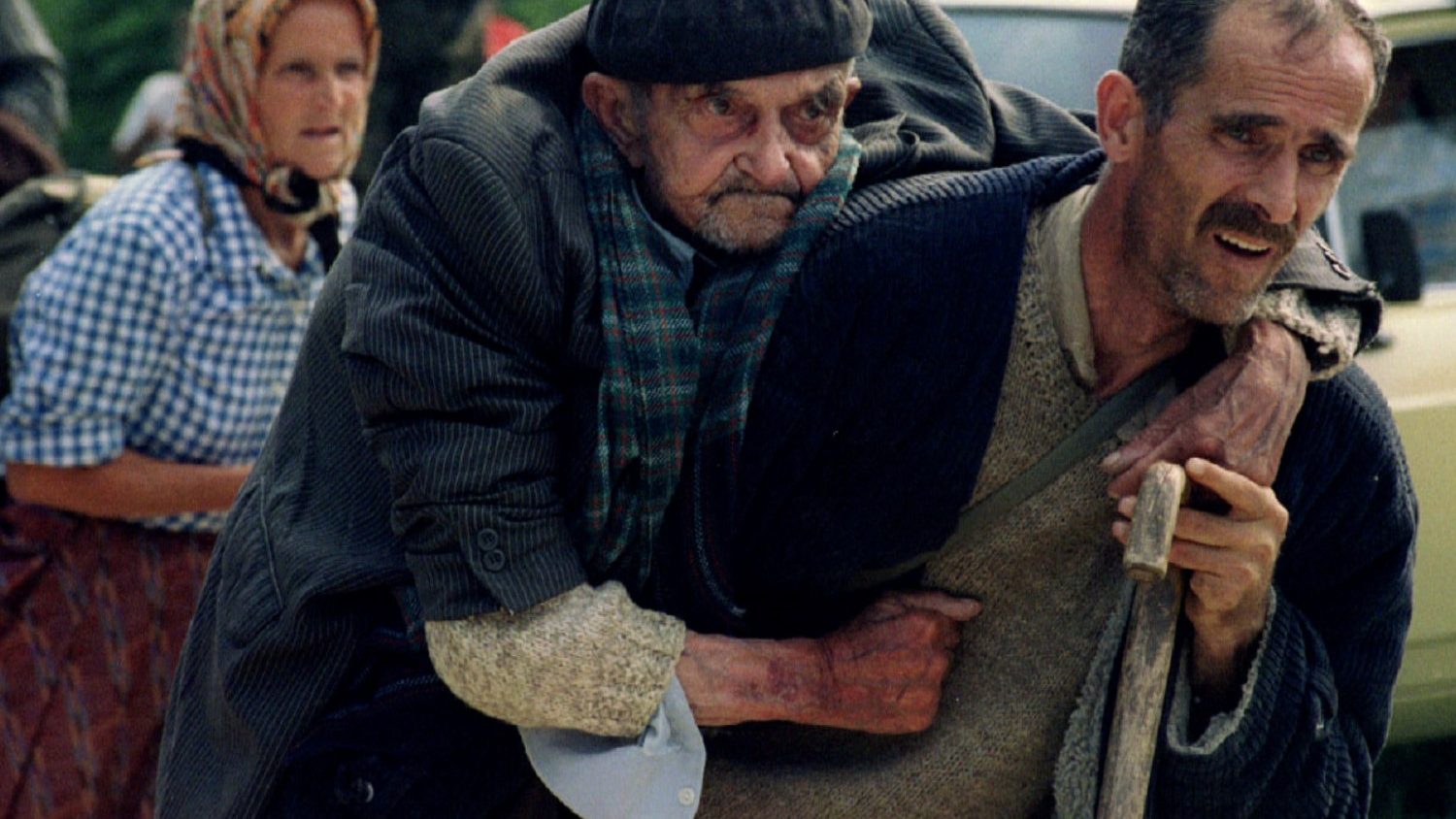 On 11 July 1995, in the name of “ethnic cleansing”, more than 8,000 Bosniak men, some of them barely teenagers, were massacred by the Bosnian Serb army under the command of Ratko Mladic, who was arrested after fifteen years on the run. He was sentenced to life imprisonment at the end of 2017 by the International Criminal Tribunal for genocide and crimes against humanity in the former Yugoslavia.

On Sunday, 16 July, five days after the massacre, John Paul II spoke about it at the Angelus:

“The news and images coming from Bosnia, and in particular from Srebrenica and Zepa, testify to the fact that Europe and humanity have plunged even deeper into the abyss of abjection. No cause, no plan can justify such barbaric actions and methods. These are crimes against humanity! How I would that my word, my affection, and my prayer might reach those brothers and sisters, rejected on the road to exodus in the most extreme misery! I beg all men and women of goodwill to continue untiringly to help those tormented people. What is being done in the eyes of the whole world constitutes a defeat of civilization. These crimes will remain as one of the saddest chapters in the history of Europe.”

The Pope calls for an end to violence against civilians

During the three years of war that followed the declaration of independence of Bosnia and Herzegovina on April 6, 1992, which ended with the Dayton Agreements of 14 December 1995, Pope John Paul II did not spare any effort to denounce the countless acts of violence, torture and abuse suffered by the civilian population. In this dark period, he increased the appeals for “disarming the aggressor” and for the right to “humanitarian intervention” while the world looked on the tragedy almost passively and took note of the ineffectiveness of UN troops deployed on the field.

In the Muslim enclave of Srebrenica, there was a long discussion about the degree of involvement of the Dutch blue helmets in the operation of separating women and children expelled by General Mladic’s men, while the men — more than eight thousand, including adolescents — were coldly and viciously massacred.

From the first months of the war, Pope John Paul II did not remain silent: “In conscience, I cannot remain silent.” He asked the United Nations and Europe for the courage of “humanitarian intervention” to “disarm the aggressor” in the former Yugoslavia. On 5 December 1992, he spoke in Rome at the International Conference on Nutrition organized by the WHO and the FAO: “The conscience of humanity, henceforth backed by measures of international humanitarian law, makes human involvement in situations that seriously jeopardize the survival of peoples and whole ethnic groups obligatory. This is a duty for nations and the international community.”

On 23 January 1994, the day of prayer for peace in the Balkans, at the Angelus, he expressed his desolation in the face of this conflict which nothing seemed capable of stopping:

“The war in the regions of the former Yugoslavia continues to resist any attempt at peace, and it disturbs us all on account of its cruelties and the multiple violations of human rights. No, we cannot give up! We must not give up! It is the responsibility of the competent bodies not to leave out anything that is humanly possible to disarm the aggressor and create the conditions for a just and lasting peace.”

No new walls in the heart of Europe

During the Week of Prayer for Christian Unity, he emphasized his regret: “Just a few years ago we rejoiced at the fall of a wall that for decades has been a symbol of the division of the world into two opposing blocs. It seemed the dawn of a new world. Who could have suspected that, in the heart of Europe, other walls would rise so abruptly, throwing up barriers of hatred and blood between brothers and sisters?”

“You are not abandoned”

In September 1994, as the conflict raged, Pope John Paul II visited Zagreb, Croatia. He could not go to Sarajevo, as he wished, but he told the people: “You are not abandoned. We are with you. We will be with you more and more!”

In the same year he placed responsibility on Europe in the Apostolic Letter Tertio millennio adveniente:

“After 1989 however there arose new dangers and threats. In the countries of the former Eastern bloc, after the fall of Communism, there appeared the serious threat of exaggerated nationalism, as is evident from events in the Balkans and other neighboring areas. This obliges the European nations to make a serious examination of conscience, and to acknowledge faults and errors, both economic and political, resulting from imperialist policies carried out in the previous and present centuries vis-à-vis nations whose rights have been systematically violated.”

Two years after the end of the war in Bosnia, John Paul II walked on the soil of the wounded city of Sarajevo, where the concrete, blood red in colour, covered the holes left by missiles. As soon as he landed, on 12 April 1997, he pronounced these words: “Never again war! Never again hatred and intolerance!”

While the wounds were still open and the buildings still gutted along “sniper avenue” where the blood of so many innocent civilians had been shed, often buried at the same site with a simple cross planted in the grass, the Pope called for forgiveness: “The natural instinct for revenge must yield to the liberating power of forgiveness, which must put an end to extreme forms of nationalism and the ethnic conflicts which they generate. As in a mosaic, every part of this region needs to be assured that its own political, national, cultural and religious identity will be safeguarded.”

Knowing how to ask for forgiveness and to forgive

Aware that the wounds would take time to heal, John Paul II pointed to four symbolic buildings in Sarajevo: the Catholic Cathedral, the Orthodox Cathedral, the Muslim mosque and the Jewish synagogue. They are not only places of prayer, the Pope explained; “they are also a visible sign of the kind of civil society which the people of this region wish to build: a society of peace.” And he affirmed that for stable peace, “against the background of so much blood and hatred, it will have to be built on the courage of forgiveness. People must know how to ask for forgiveness and to forgive!”

Pope Francis: Dialogue and forgiveness in the face of cries of hatred

Eighteen years after Pope John Paul II’s visit, another pilgrim of peace set foot on the soil of Sarajevo, on 6 June 2015.

Almost twenty years after the massacre in Srebrenica, in a country that has not yet overcome all its problems, where the war has left deep traces, Pope Francis declared that “cordial and fraternal relations between Muslims, Jews, Christians and other religious minorities” have an importance that goes well beyond the borders of Bosnia-Herzegovina. “They offer a witness to the entire world that such cooperation among varying ethnic groups and religions in view of the common good is possible.”

Addressing the members of the collegial presidency composed of three representatives (from the Serbian, Croatian and Bosnian communities, according to the 1995 agreements), Pope Francis called for the recognition of the “fundamental values of human communities” to collaborate, build, dialogue, forgive and grow; as opposed to “barbarism” and “fanatical cries of hatred.”

(Translation from the original)