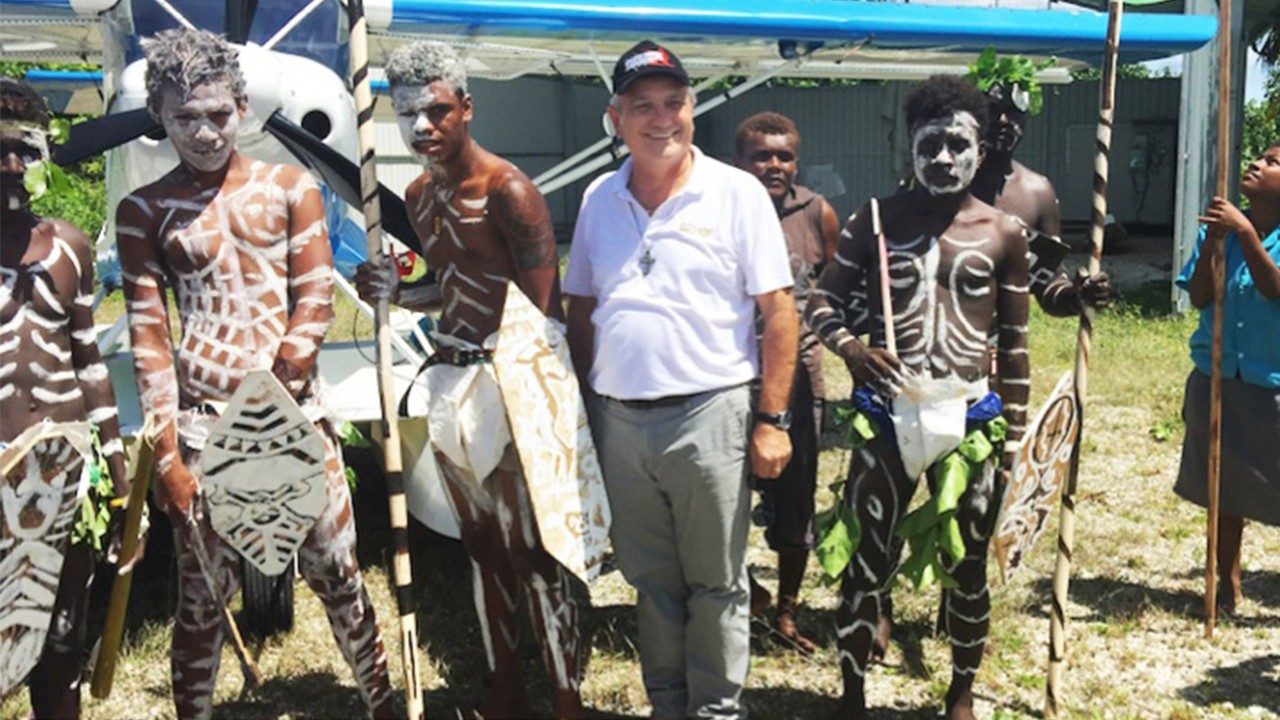 21 years in the South Pacific and nearly 8 years as Bishop of Gizo Diocese in the Solomon Islands have made Bishop Luciano Capelli a prime witness to the devastating effects wreaked by climate change on one of the earth’s most beautiful, but most fragile, ecosystems.

The Italian-born Salesian missionary has been caring for the souls and the wellbeing of Solomon Islanders, seeing to their pastoral and spiritual needs and delivering medicine and basic necessities to the poor since he was sent to the area following a devastating earthquake destroyed homes, schools and churches..

He’s known as “the flying Bishop” because he pilots a small aeroplane across some 40 lush islands that make up the Diocese of Gizo, home to about 120,000 inhabitants.

But life in Australia’s next door neighbour isn’t as simple or easy as tourist pamphlets suggest. The nation is still struggling to overcome the devastation of civil war and many of its people continue to lack running water, basic health care, education and nutritious food.

In all of this, Bishop Capelli told Vatican Radio, climate change is a real threat in a territory where islands, atolls and large swaths of land and villages disappear into the ocean as the coastline is eroded and overwhelmed.

“We are exposed to the consequences of climate change”, he said explaining that migrants, forced to flee their homes because of the rise of sea levels, continue to arrive in the area and live in precarious conditions which lack basic services.

The impact of climate change, Bishop Capelli said, is far-reaching and ranges from a shortage of fish caused by dying coral reefs, to rising costs of food, to floods, displacement and unemployment.

“The Pope invites us to change course; he exhorts us to greater justice and here we see how this touches us closely. Some people own a lot of land and others live in shacks on islands made of dead coral or on stilts in unhealthy conditions in mangrove forests.”

The plundering of forests and resources

“Here we see the injustice,” Capelli continued, “that comes from lacking a place in which to live with dignity: there is a lack of schools, toilets and sanitary facilities for about 150 families”.

He expressed particular concern for what appears to be a total lack of attention on the part of the powers-that-be regarding the continued exploitation of the Solomon Islands’ natural resources by some multi-national organizations.

“What is worrying is that none of the powerful people seems to see the presence of some multinational organizations that are not allowed to fell trees in their countries, come here and raid our lungs,” he said.

This particular injustice was highlighted by Pope Francis in his Prayer Intention for September dedicated to the Season of Creation: a month of reflection that began on 1 September and is scheduled to last until 4 October, the feast of St. Francis of Assisi.

Bishop Capelli concluded pointing out that in his part of the world, as in many others, it is the Church that makes up for so many shortcomings.

“I hope to be able to continue to serve the people spiritually and materially, involving the laity more and more.”

Bishop Luciano Capelli has been the Bishop of the Diocese of Gizo since 2007. He was sent there after 35 years of missionary work in the Philippines in the wake of a devastating earthquake. Some 15% of the inhabitants on his 40-island diocese is Catholic. Recently in Nusabaruku, an area of fishing villages, a primary school was inaugurated for children who have difficulty reaching the town of Gizo by boat every day.