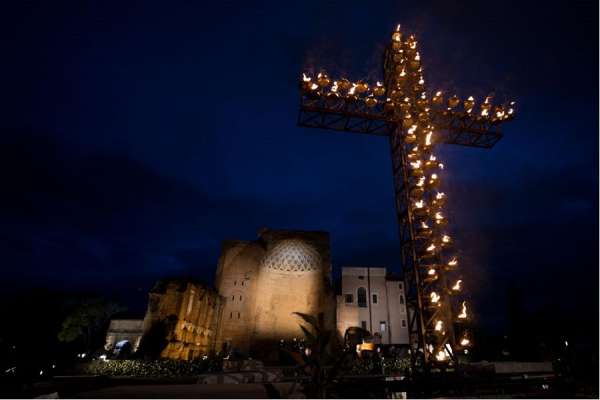 Vatican City, Mar 23, 2021 / 12:00 pm (CNA).- Pope Francis chose a scouting group from central Italy and kids from a Roman parish to prepare the meditations for this year’s Good Friday Stations of the Cross at the Vatican.

The Vatican announced Tuesday that the Agesci “Foligno I” Scout Group in Umbria, made up of 145 young people between the ages of eight and 19, has composed the meditations for the 2021 edition of the Way of the Cross with Pope Francis.

An additional group of around 500 kids from the First Communion and Confirmation catechism classes at the Rome parish of the Holy Martyrs of Uganda have also helped prepare the meditations, the Vatican said.

While traditionally held at the Colosseum, the pope’s Way of the Cross will take place in St. Peter’s Square for the second year in succession due to the coronavirus pandemic.

The prayer, which is scheduled for 9 p.m. Rome time on April 2, will be live-streamed. Attendance by the general public will not be permitted due to Rome’s COVID-19 restrictions.

Each of the 14 stations will also be accompanied by drawings from young children and adolescents living at the Mater Divini Amoris and Tetto Casal Fattoria family homes in Rome.

The Mater Divini Amoris Family Home is run by the sisters of the Congregation of the Daughters of Our Lady of Divine Love, and currently looks after eight children ages three to eight.

The Tetto Casal Fattoria Family Home is a social cooperative that supports children and youth “in the growth and construction of a life project.”

Due to coronavirus restrictions, Pope Francis will hold the Stations of the Cross outside of St. Peter’s Basilica.

The Roman tradition of holding the Way of the Cross at the Colosseum on Good Friday dates back to the pontificate of Benedict XIV, who died in 1758.

After dying out for a period, the tradition was revived in 1964 by Pope Paul VI, while under Pope John Paul II the Way of the Cross at the Colosseum became a worldwide television event.

Each year, the pope personally selects who will write the meditations for the stations.

Last year, Pope Francis asked the chaplaincy at the “Due Palazzi” House of Detention in Padua, northern Italy, to prepare the meditations.

Contributors included parents whose daughter was murdered, the child of a man sentenced to life imprisonment, a magistrate, a prisoner’s mother, a corrections officer and a priest acquitted after eight years in the justice system.

Share on FacebookShare on TwitterShare on PinterestShare on EmailShare on LinkedIn
At least 15 found dead after Bangladesh Rohingya camp blazeGregory: 'Healing of America's soul' needed to end racism