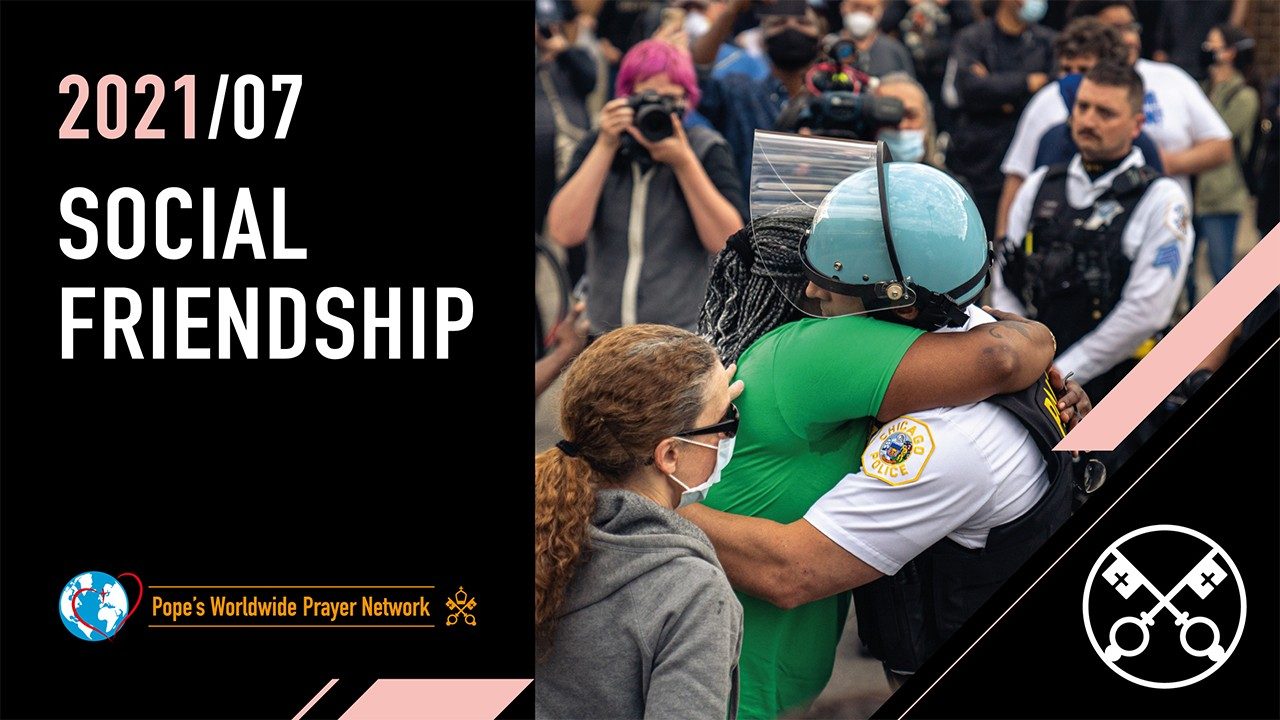 In his video message in Spanish, Pope Francis focuses on dialogue as the “path to seeing reality in a new way, so we can live with passion the challenges we face in constructing the common good.”  He calls for an end to polarization that divides us, and urges prayers that there be no space for “enmity or war”.

The Pope Video has just been released with the intention that Pope Francis is entrusting to the entire Catholic Church through the Pope’s Worldwide Prayer Network.

In the month of July, the Holy Father calls on all to become “architects of dialogue and friendship” to solve the conflicts and causes of division that exist in society and among individual people. Only through dialogue, he says, is it possible to avoid the constant polarization and social enmity that destroy so many relationships.

The Holy Father asks that we pray to construct the common good with men and women who extend a hand to each other, and especially to always be at the side of the “most impoverished and vulnerable, those on the peripheries”.

In comments on the prayer intention, a press release from The Pope’s Worldwide Prayer Network notes that even though the number of war deaths has been dropping since 1946 on a global level, conflicts and violence on a societal level are more present than ever. Although at times it doesn’t manifest itself physically, we can observe a growing polarization that ends up contaminating many relationships.

Pope Francis had already warned about this in 2016. He said, “We see, for example, how quickly those among us with the status of a stranger, an immigrant, or a refugee, become a threat, take on the status of an enemy.” Since then, he has been observing with concern how polarization and enmity were also a “virus” that was invading our ways of thinking, feeling and acting.

In his video message, the Holy Father points out that today, “part of our politics, society and media dedicate themselves to creating enemies so as to defeat them in a game of power”. This is why we need to “build social friendship, which is so necessary for living together well,” a friendship that can serve as a bridge to continue creating a culture of encounter, which will bring us closer, above all, to those who are on the peripheries, the most impoverished and vulnerable.

In his social encyclical, Fratelli tutti (2020), the Pope dedicated the sixth chapter to “Dialogue and Friendship in Society”.

“Authentic social dialogue involves the ability to respect the other’s point of view and to admit that it may include legitimate convictions and concerns” (FT 203). In his intention for July, he reinforces this idea, reaffirming that dialogue is a great opportunity to see “reality in a new way, so we can live with passion the challenges we face in constructing the common good.”

The Pope’s Worldwide Prayer Network points out that giving priority to dialogue means abandoning the logic of polarization and replacing it with respect, without wanting to destroy others. There can be richness in differences, but if there is no dialogue, we can allow them to lead to hostility, threats and violence.

Several years ago, Pope Francis had said, “We come from distant lands; we have different traditions, skin color, languages and social backgrounds; we think differently and we celebrate our faith in a variety of rites. None of this makes us enemies; instead, it is one of our greatest riches.”

Below is a translation of the Pope’s video message:

The Bible says that whoever finds a friend has found a treasure.

I would like to invite everyone to go beyond their groups of friends and build social friendship, which is so necessary for living together well.

We especially need to have a renewed encounter with the most impoverished and vulnerable, those on the peripheries. And we need to distance ourselves from populisms that exploit the anguish of the people without providing solutions, proposing a mystique that solves nothing.

We must flee from social enmity which only destroys, and leave “polarization” behind.

And this isn’t always easy, especially today when part of our politics, society and media are bent on creating enemies so as to defeat them in a game of power.

Dialogue is the path to seeing reality in a new way, so we can live with passion the challenges we face in constructing the common good.

Let us pray that, in social, economic, and political situations of conflict, we may be courageous and passionate architects of dialogue and friendship, men and women who always hold out a helping hand, and may no spaces of enmity and war remain.

Share on FacebookShare on TwitterShare on PinterestShare on EmailShare on LinkedIn
Pope Francis: God ‘weaves our history’Pope to meet with delegation of indigenous people from Canada