Home Test page Pope to youth of ‘Shalom’ Community: ‘Continue to be creative’

Pope to youth of ‘Shalom’ Community: ‘Continue to be creative’ 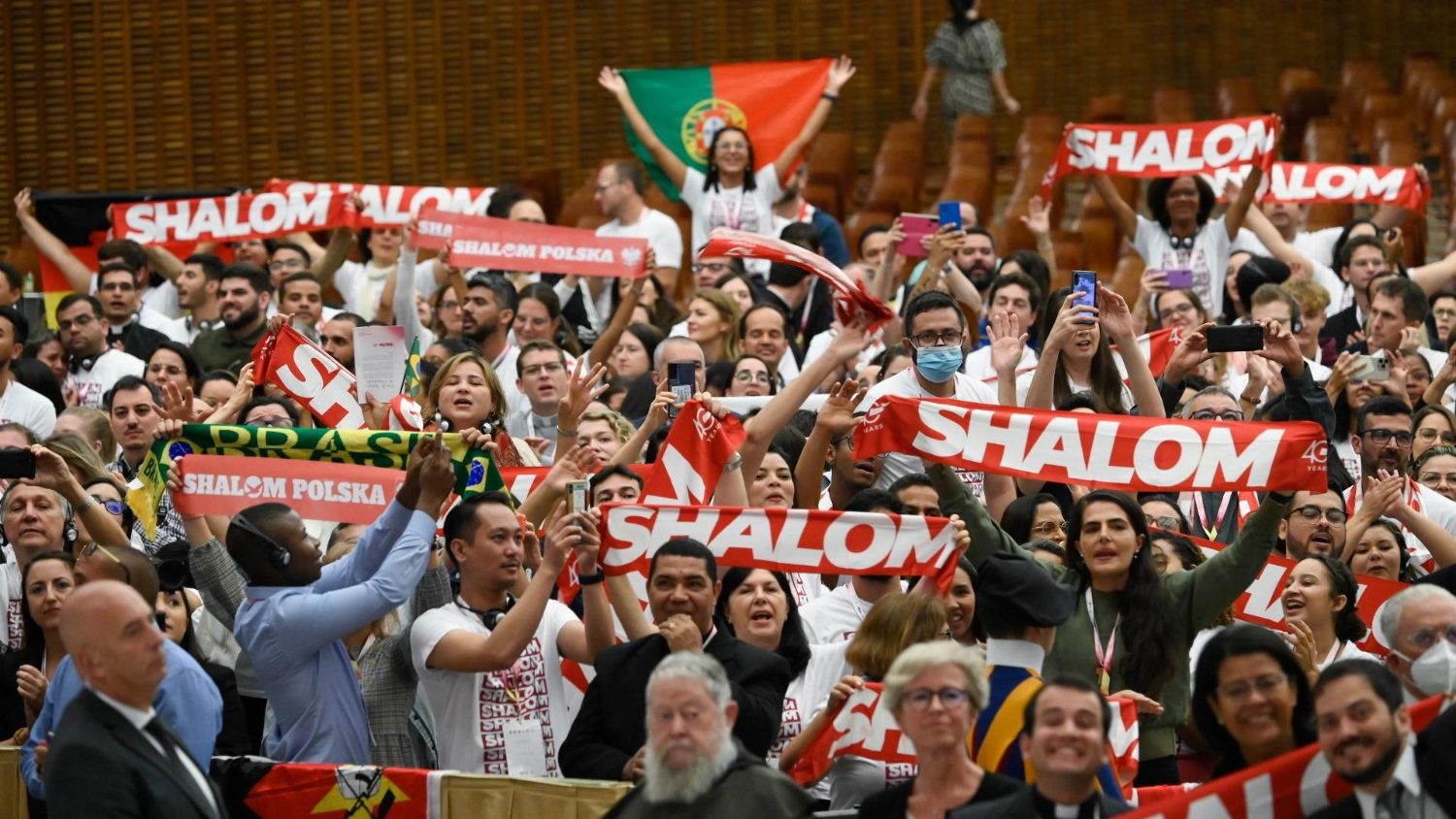 Be creative, courageous and welcoming in your missionary drive. Pope Francis gave this challenging mandate to the young people of the “Shalom” Movement when receiving them on Monday in the Vatican as they meet in Rome for their five-yearly convention marking the 40th year of foundation.

The Catholic Community was founded in Fortaleza, Brazil, in 1982 by Moysés Louro de Azevedo Filho and Maria Emmir Oquendo Nogueira, to encourage young people to participate in the world, to be seeds of change, builders of peace, following the example set by Jesus. It subsequently has expanded to other countries around the world, and in 2007, was recognized by the Pontifical Council for the Laity as an international association of faithful.

Its charism is the evangelization of the young by the young, with the goal of being the “face of Christ” in the Church and in society.  The Community is present today in 33 countries, has 1,500 Life Community missionaries, and about 10,000 Covenant Community missionaries, apart from the current members of the Shalom Work. Its members have the tradition to go on pilgrimage to Rome every five years to renew their life offering before the Holy Father.

It is the Holy Spirit who makes the Church live

Pope Francis thanked the founders for their introductory remarks, and in particular, for remembering the circumstances in which the “Shalom” Catholic Movement was born, that is during a Eucharistic celebration in Fortaleza. This, he said, reminds us that, “It is the Holy Spirit that makes the Church live, who pushes it forward.”

Answering to the testimonies of five young people from different countries, Pope Francis reflected on how to persevere in friendship with God in a “hectic world” and inspire other people in our environments with the Gospel message; on the role of young people in the Church;  on the importance of friendship with the poor;  and on the present and future of the “Shalom” Community.

Concerning the first question presented by a young woman named Fabiola, the Pope focused on the need to “abide in Jesus” and His love, “that touches people’s hearts, wherever we are, in every environment.”

The rest, he added, “is done by the Holy Spirit.”

Youth protagonism in the Church

He also stressed the importance of reminding that being young is “not so much about physical youth, but about youth of spirit,” as recalled by Pope St. John II, warning against “paternalism” toward young people.

As examples of youth protagonism and holiness in the Church, the Pope cited Blessed Carlo Acutis, St. Piergiorgio Frassati, St. Gabriel of the Sorrowful Virgin St. Teresa of the Child Jesus, and also St. Francis and St. Clare of Assisi.

Friendship with the poor

Answering the question about “friendship with the poorest brothers and sisters,” Pope Francis called attention to the extraordinary example of St. Theresa of Calcutta, who went out to find the Lord Jesus in “in the faces of the abandoned people.”

Reflecting on the present and future of the “Shalom” Movement, following the testimonies of two young people about their experience, Pope Francis encouraged participants to keep alive their “missionary enthusiasm” which over the years, has given life “to an ecclesial reality that now includes not only young people, “but also families, celibates committed to the mission, and priests.”

He told them not to keep their faith in a “museum.”

The Pope recalled that the name of the movement “Shalom” (“Peace be with you!”) highlights its charism: “This peace has reconciled you with God, with yourselves and with others and now you try to pass it on to all the people you meet.”

Listening to the Mother Church

Pope Francis also insisted on the Catholic nature of the movement:

“You have put the Eucharistic celebration, Adoration, Confession at the center. You have valued preaching, music, individual and community contemplative prayer. This is truly the ‘Catholic’ and an inexhaustible wealth that is found in the Church and from which we must always draw.”

Recalling that since its outset, the “Shalom” Community had been actively supported by late Cardinal Aloísio Lorscheider, then-Archbishop of Fortaleza, Pope Francis urged its members “to remain docile to the action of the Spirit, open to mutual listening and to the guidelines of the Church, in order to best discern how to continue on your journey.”

“Docility to the Holy Spirit, experience and listening to the Mother Church will teach you to always avoid any form of interference in the personal conscience”

May St. Francis of Assisi and St. Teresa of Jesus accompany you

Concluding, Pope Francis blessed the pilgrims and invoked the aid of St. Francis of Assisi, of St. Teresa of Jesus and of the Virgin Mary in their ongoing journey.

“May St. Francis of Assisi and St. Teresa of Jesus accompany you in your journey. May the Virgin Mary, model of every donation to the Lord, keep within you the spirit of trust and abandonment to the Father, and help you to persevere in your choice. May the Lord welcome the gift of your life and sustain you with his grace. I cordially bless you and ask you, please, to pray for me.”

The audience in the Paul VI Audience Hall was also attended by Cardinal Kevin Joseph Farrell, Prefect of the Dicastery for the Laity, the Family and Life, and by Cardinal Odilo Pedro Scherer of San Paulo, Brazil.

Share on FacebookShare on TwitterShare on PinterestShare on EmailShare on LinkedIn
Go and proclaim: providing spiritual support to German youthCardinal Czerny: 'Work together to improve education for migrants'