Pope to visit Iraqi cities of Erbil, Mosul and Qaraqosh on Day 3 of Apostolic Visit 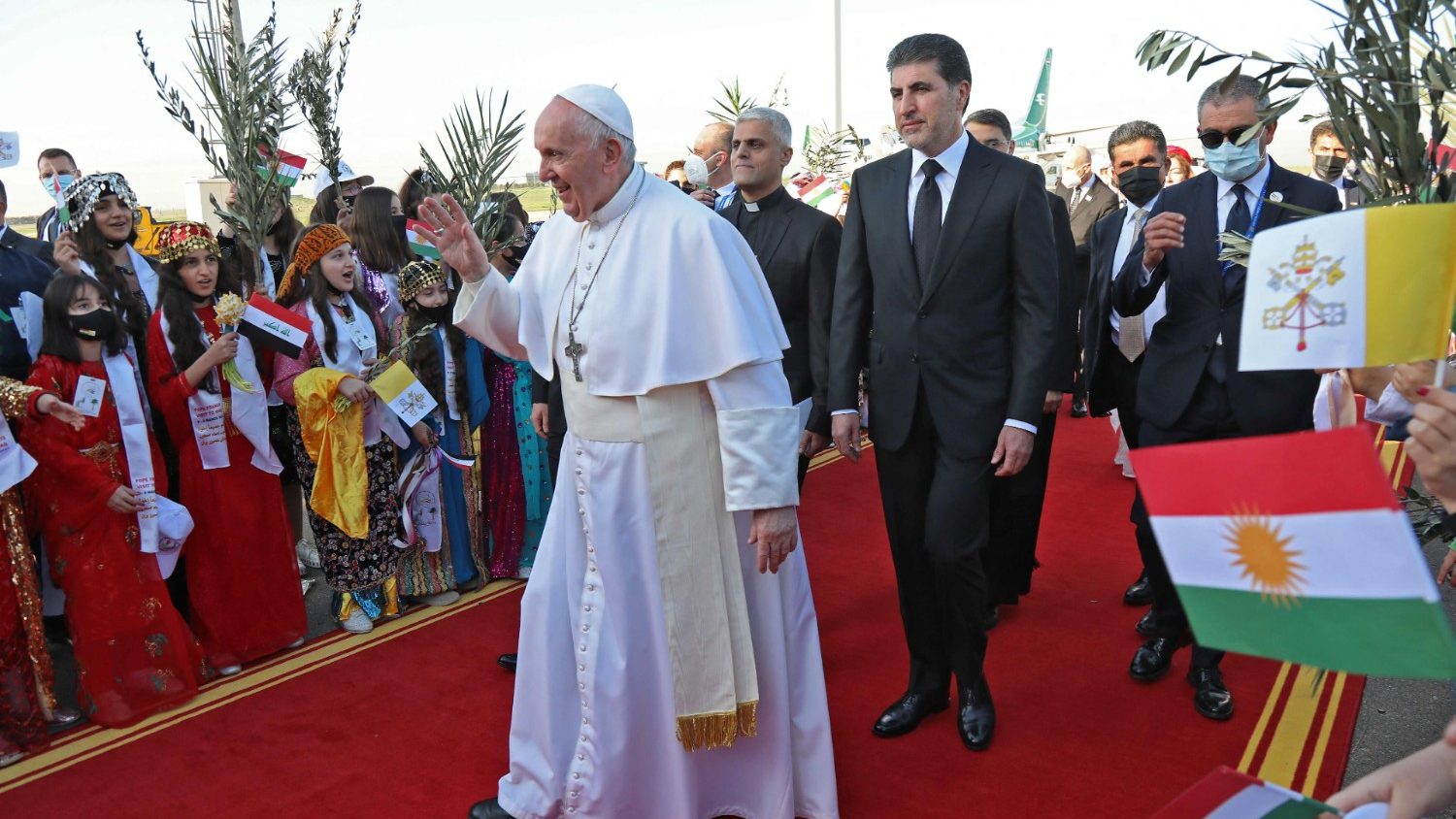 On Sunday, at the start of the third day of his Apostolic Journey to Iraq, Pope Francis flew from Baghdad to Erbil where, upon his arrival, he was welcomed by the President, the Prime Minister of the autonomous region of Iraqi Kurdistan, as well as civil and religious authorities.

The Pope then met with the President of the autonomous region of Iraqi Kurdistan, Nechirvan Barzani, and the Prime Minister, Masrour Barzani at the Presidential VIP Lounge of the airport.

Later in the day, Pope Francis is scheduled to visit Mosul where he will lead a prayer of suffrage for war victims at Hosh al-Bieaa. He will then travel to Qaraqosh where he will visit the faithful at the Church of the Immaculate Conception. Afterwards, he will return to Erbil, where at 4:00 PM he will celebrate Holy Mass at the “Franso Hariri” stadium. The Pope will then travel back to Baghdad.

The city of Erbil

Also known as Hewlêr in Kurdish and Arbīl in Arabic, the city of Erbil is the capital and the largest city of the autonomous region of Iraqi Kurdistan. It is located at an approximated 88 kilometers east of Mosul and is just under 300 kilometers away from the Syrian border.

Considered as one of the oldest cities in the world, Erbil’s first urban settlements date as far back as 2300 BC. Over the centuries, many peoples including Sumerians, Assyrians, Babylonians, Medes, Romans Abbassids and Ottomans have lived within the citadel of this ancient city.

The famous citadel of Erbil, designated a UNESCO World Heritage site in 2014 covers about 110,000 square meters and sits about 30 meters above its immediate surroundings. Inside it is located the Grand Mosque and the Kurdish Textile Museum. The city’s significant museums – the Erbil Civilization Museum and the Syriac Heritage Museum – are home to several artifacts from the area.

Other places of interest in the Erbil include the Mudhafaria Minaret (Choly Minaret) built in the 12 century and thought to be the remaining part of an ancient mosque; the Jalil Khayat Mosque – the largest in the city – which was completed in 2007, the Minaret Gallery, and the Shanidar gallery. There is also the 12th-century Qaysari Bazaar, as well as the Minare, Shanadar and Sami Abdulrahman parks.

Also located in Erbil is the Chaldean Cathedral of St. Joseph, Ankawa, – one of the largest Christian enclaves in the Middle East made up of mainly Assyrian Christians who speak Neo-Aramaic languages.

In recent years, Erbil has become home to thousands of refugees, mostly from Qaraqosh and Mosul, who fled for their lives during the rule of the so-called Islamic State. The city has welcomed an estimated 540,000 Iraqi refugees in addition to other Syrian refugees into camps in the region.

The autonomous region of Iraqi Kurdistan

Officially recognized with the introduction of its constitution which was adopted in 2005, the autonomous region of Iraqi Kurdistan, located in the northeast of Iraq is comprised of four governorates of Dohuk (Dihok), Erbil (Hewlêr), Halabja (Helebce) and Sulaymaniyah (Silêmanî). The autonomous region is bordered in the east by Iran, in the north by Turkey and in the west by Syria.

Share on FacebookShare on TwitterShare on PinterestShare on EmailShare on LinkedIn
“I, Deena Hinshaw”: On Canada, COVID-19, and religious libertyPope's prayer for victims of war in Iraq: Peace, justice and serene coexistence