Home Test page Pope to Latin American seminarians: ‘Cure the world of the evil that afflicts it’

Pope to Latin American seminarians: ‘Cure the world of the evil that afflicts it’ 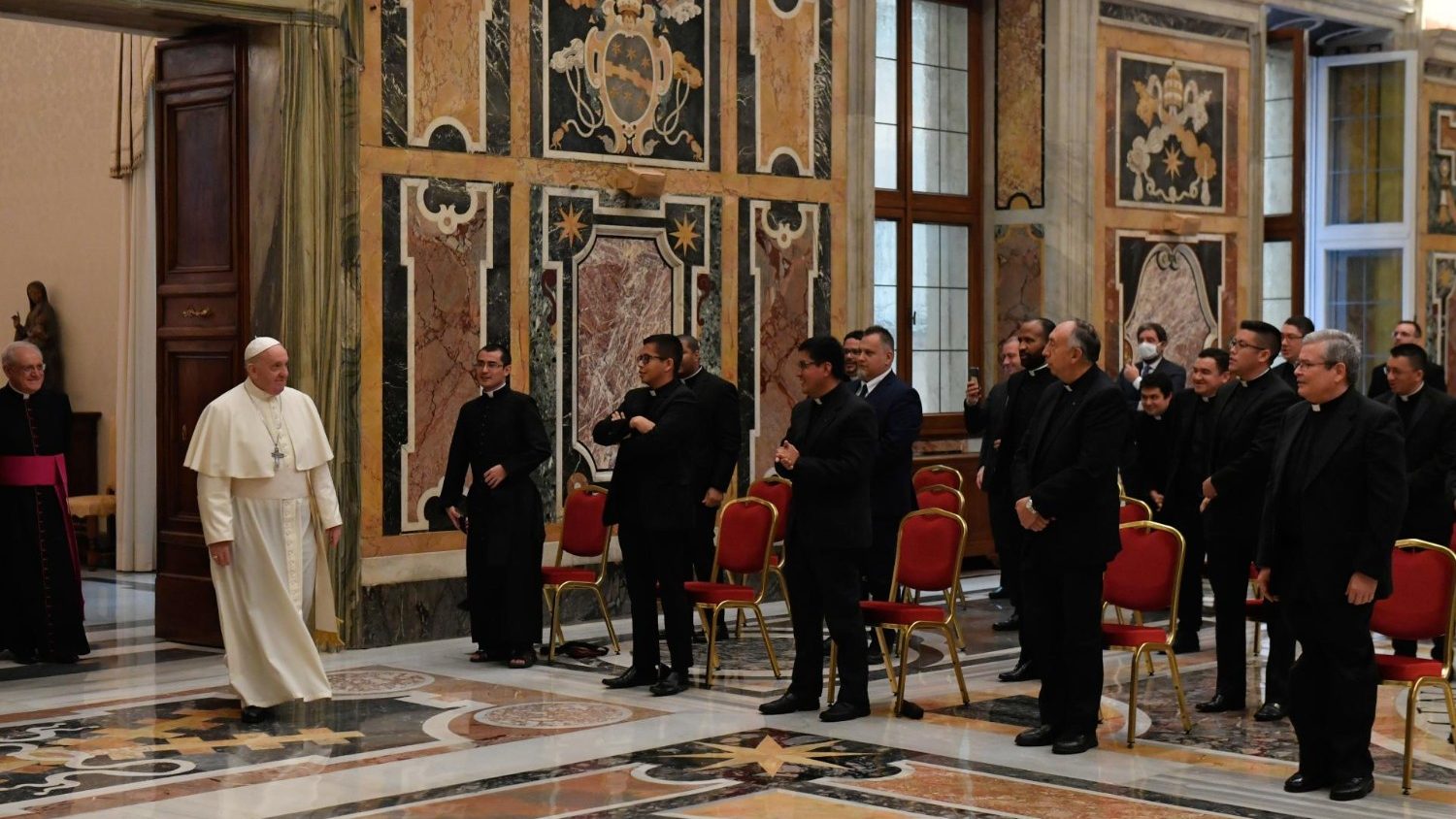 “Although history has separated our peoples, it has not destroyed the root that unites them in that great work that was the evangelization of America”, with these opening words, Pope Francis greeted the entire community of the Pontifical Latin American College, and explained that it is on this premise that the College was born: “as a commitment that would unite all our particular Churches and at the same time open them to the universal Church in this city of Rome.”

Open your hearts to what others may bring

Pope Francis went on to note that this particular experience of communion and openness is a great challenge and can “help heal the world”. “The Gospel and its message came to our land by human means…and its Word spread to all corners of the continent”, he said, explaining that this “miracle” took place because “both those who arrived and those who received them were able to open their hearts” to what the other could bring.

The Pope then explained that the Latin American presence, worldwide, is one that has brought huge benefits to Christian communities globally: from Northern and Central Europe all the way to the East these communities have found in them “a new vitality and a renewed drive.” He used the example of the celebration of the Christ of Miracles, and Our Lady of Guadalupe: “The rich cultural mix that made evangelization possible is being reproduced again today. Latino peoples meet among themselves and with other peoples thanks to social mobility and the facilities of communication, and they too emerge enriched from this encounter.”

This is what your formation should be about, continued the Pope, “sowing the Word generously” as God sows. There are three concrete points of action, said the Pope: “opening the door of your heart and the hearts of those who listen to you; to pitch in and call others to do so with you for the good of all; to heal this world of the great evil that afflicts it and that the pandemic has brought to light”. Each of these, he continued, have two movements, “personal and community”, which are inevitably completed.

Be shepherds, continued the Pope. “Surely, in your heads, there are infinite initiatives and I do not doubt that by working hard you will do much good and help many people, but our mission would not be perfect if we stayed at that”, said the Pope. He urged the members of the College to “fight against the culture of discard, social segregation, distrust and prejudice because of race, culture or faith”, so that a feeling of brotherhood may prevail over any difference.

“Cure the world of the great evil that afflicts it”, continued Pope Francis.

“The pandemic has put us in front of the great evil that afflicts our society. Globalization has overcome the borders, but not the minds and hearts. The virus is spreading unchecked, but we are unable to respond together. The world continues to close its doors, rejecting dialogue and collaboration, refusing to open itself sincerely to common commitment for a good that reaches everyone without distinction.”

The cure of this evil must come from below, concluded the Pope. It must come “from the hearts and souls that will one day be entrusted to them, with concrete proposals in the field of education, catechesis, social commitment, capable of changing mentalities and opening spaces, to heal this evil and give God a united people.”

Finally, Pope Francis prayed that the Virgin Mother, the Guadalupana, Patroness of Latin America may “sustain hope” in the midst of so many uncertanties, so that each member may second the call of God “and be witness of the human brotherhood that is born of being children of God.”

Share on FacebookShare on TwitterShare on PinterestShare on EmailShare on LinkedIn
Pope Francis urges Passionists to help ‘the crucified of our age’World Fisheries Day: 'Time to act to protect fishers'