Pope: Sept. 4, day of prayer, fasting in solidarity with Lebanon 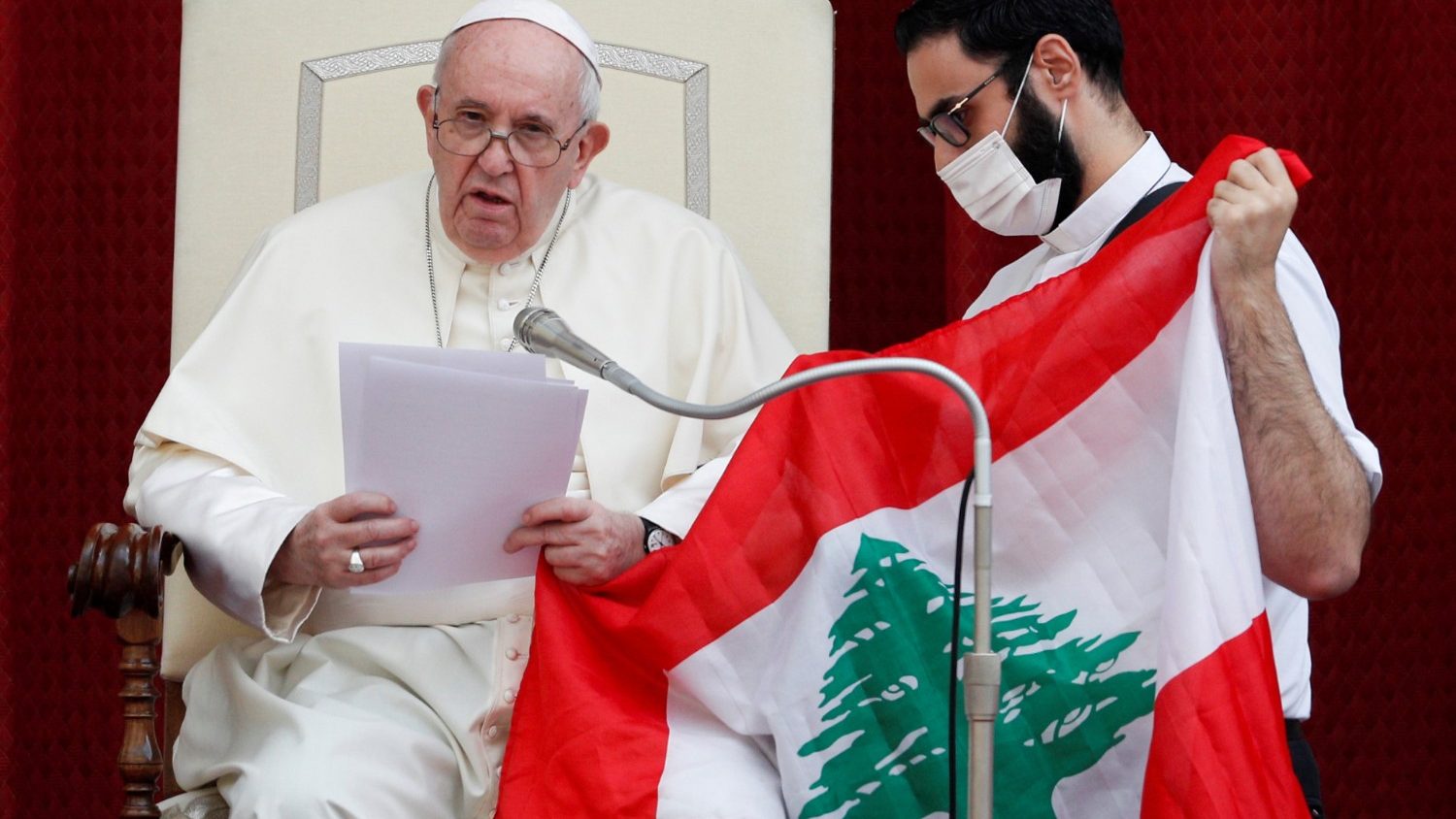 Pope Francis on Wednesday called for a day of prayer and fasting on Friday for Lebanon, which beside the deadly explosion of August 4 in Beirut, has been going through the worst economic and political crisis in its history.

“One month after the tragedy that struck the city of Beirut, my thoughts are still with dear Lebanon and its particularly troubled population,” the Pope said during his weekly General Audience in the Vatican.

With a limited number of people attending the General Audience for the first time since the start of the pandemic, the Pope called to himself a Lebanese student priest with his country’s flag.  “In the face of the repeated tragedies that each of the inhabitants of this land knows, we become aware of the extreme danger that threatens the very existence of the country,” the Pope said clutching and edge of the flag in a symbolic gesture of closeness with the Middle East nation.

“Lebanon cannot be abandoned in its solitude,” the Pope said noting that for over a hundred years, it has been a country of hope. The Pope expressed admiration for the Lebanese people’s faith in God and their ability to make their country a “place of tolerance, respect and coexistence, unique in the region”.

“Lebanon,” the Holy Father said, “is a message of freedom, an example of pluralism for both East and West.” “For the very good of the country, but also for the world, we cannot allow this heritage to be lost,” he said alluding to the long-drawn crisis in the country.

Even before Covid-19, Lebanon has going through the worst economic crisis in its history, which triggered large-scale anti-government protests last year. Today, nearly half the country’s 6 million people are living below the poverty line.

Analysts warn that the scale of the catastrophe may be worse than the 15-year civil war, which raged from 1975 to 1990.

Appeal to political and religious leaders

Pope Francis encouraged “all Lebanese people to continue to hope and to find the necessary strength and energy to start again”.  He particularly urged “politicians, religious leaders, to commit themselves with sincerity and transparency in the work of reconstruction, setting aside partisan interests and looking to the common good and the future of the nation”.

The Holy Father also renewed his “invitation to the international community to support the country to help it emerge from the serious crisis, without being involved in regional tensions”.

He particularly urged the people of Beirut to take courage and seek in faith and prayer.  “Do not abandon your homes and your inheritance, do not let the dreams of those who have believed in the future of a beautiful and prosperous country fall away,” he exhorted the Lebanese people.

Addressing the pastors, bishops, priests, consecrated, lay people of the country, he ured hem to accompany their suffering faithful with apostolic zeal and poverty, without luxury.  “Poverty with your poor people who are suffering,” he stressed, adding, “You give the example of poverty and humility.” “Help your faithful and your people to rise up and be protagonists of a new rebirth.”

He urged the Church leaders to work for harmony, the common good, a true culture of encounter and living together in peace and brotherhood, which is so dear St. Francis.

“On this foundation,” he pointed out, “we can ensure the continuity of the Christian presence and your inestimable contribution to the country, the Arab world and the whole region, in a spirit of brotherhood among all the religious traditions that exist in Lebanon.”

Closeness and solidarity with prayer and fasting

Hence, Pope Francis invited “everyone to live a universal day of prayer and fasting for Lebanon, next Friday, September 4.”  On that day, he said, he intends to send to Lebanon Vatican Secretary of State, Cardinal Pietro Parolin, as an expression of his closeness and solidarity with the people.

The Pope also invited other Christian Churches and religious traditions to join this initiative in the manner they deem most appropriate.