Pope Francis shares 8 Beatitudes for Bishops, giving a model for the 21st-century pastor 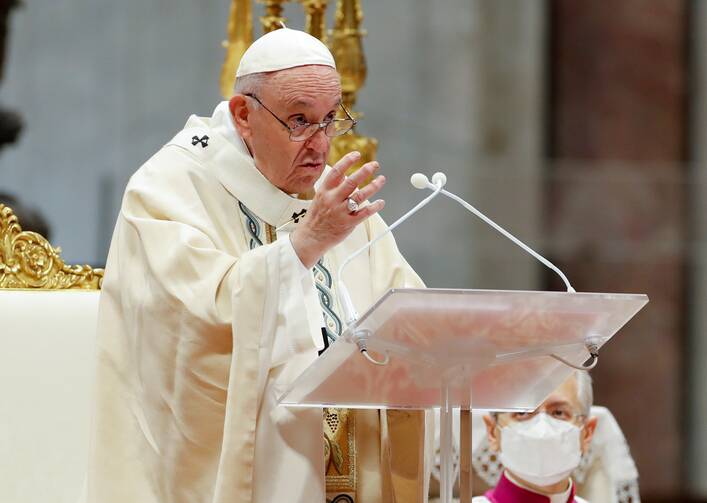 Pope Francis has given a text called “The Beatitudes of the Bishop” to all the Italian bishops meeting in plenary assembly in Rome. The text offers encouragement and pastoral guidance not only to the Italian bishops but to the more than 5,000 Catholic bishops in the world today

The Vatican released the text after Pope Francis had given a card with an image of the Good Shepherd and the text of “The Beatitudes of the Bishop” to each of the more than 200 bishops present at the opening session of the plenary assembly of the Italian bishops’ conference on Nov. 22, which is being held at a hotel in Rome. Francis drove from the Vatican to the hotel to address the bishops and was welcomed on his arrival by the president of the conference, Cardinal Gualtiero Bassetti.

Pope Francis has given a text called “The Beatitudes of the Bishop” to all the Italian bishops meeting in plenary assembly in Rome.

It was originally thought that Francis had written the text himself, but it later transpired that the text had been written by the archbishop of Naples, Domenico Battaglia, who first used it at the ordination of three new bishops for that diocese in a homily on Oct. 31. The pope learned about the text and made it his own by having it printed on a card and giving it to each of the Italian bishops.

It is modeled on the eight beatitudes given by Jesus in the Sermon of the Mount, as recounted in Chapter 5 of the Gospel according to St. Matthew. By giving it such visibility,  Francis clearly wishes to provide practical guidance and inspiration to bishops worldwide and to the men who will become bishops in the future.

The beatitudes of the bishop are challenging and very much in Francis’ style. They offer a portrait of how a pastor should be in the 21st century, in a world where there is so much poverty, injustice, conflict, suffering and human fragility. They are a call to serve and to dirty one’s hands, to wipe tears and work for justice, peace and reconciliation, to find goodness even in the worst situations and to work to build fraternity in today’s world.

These beatitudes also highlight the temptations faced by bishops, like that of seeking power and a comfortable lifestyle.

These beatitudes also highlight the temptations faced by bishops, like that of seeking power and a comfortable lifestyle.

Full text of “The Beatitudes of the Bishop”

1. Blessed is the bishop who makes poverty and sharing his lifestyle because with his witness he is building the kingdom of heaven.

2. Blessed is the bishop who does not fear to water his face with tears, so that in them can be mirrored the sorrows of the people, the labors [fatigue] of the priests, [and] who finds in the embrace of the one who suffers the consolation of God.

Blessed is the bishop who makes poverty and sharing his lifestyle because with his witness he is building the kingdom of heaven.

3. Blessed is the bishop who considers his ministry a service and not a power, making meekness his strength, giving to all the right of citizenship in his own heart, so as to inhabit the land promised to the meek.

4. Blessed is the bishop who does not close himself in the palaces of government, who does not become a bureaucrat more attentive to statistics than to faces, to procedures than to [people’s] stories, who seeks to fight at the side of people for the dream of the justice of God because the Lord, encountered in the silence of daily prayer, will be his nourishment.

5. Blessed is the bishop who has a heart for the misery of the world, who does not fear dirtying his hands with the mud of the human soul in order to find there the gold of God, who is not scandalized by the sin and fragility of the other because he is conscious of his own misery, because the look of the Risen Crucified One will be for him the seal of infinite pardon.

Blessed is the bishop who for the Gospel does not fear to go against the tide.

6. Blessed is the bishop who wards off duplicity of heart, who avoids every ambiguous dynamic, who dreams good even in the midst of evil, because he will be able to enjoy the face of God, tracking it down in every puddle of the city of people.

8. Blessed is the bishop who for the Gospel does not fear to go against the tide, making his face “hard” like that of Christ heading to Jerusalem, without letting himself be held back by misunderstandings and by obstacles because he knows that the Kingdom of God advances in contradiction to the world.

Share on FacebookShare on TwitterShare on PinterestShare on EmailShare on LinkedIn
Faith leaders unite to ‘Pray for Dobbs,’ the case that could overturn RoeCatholic University of America: Unintentional abortion coverage for students wasn’t used