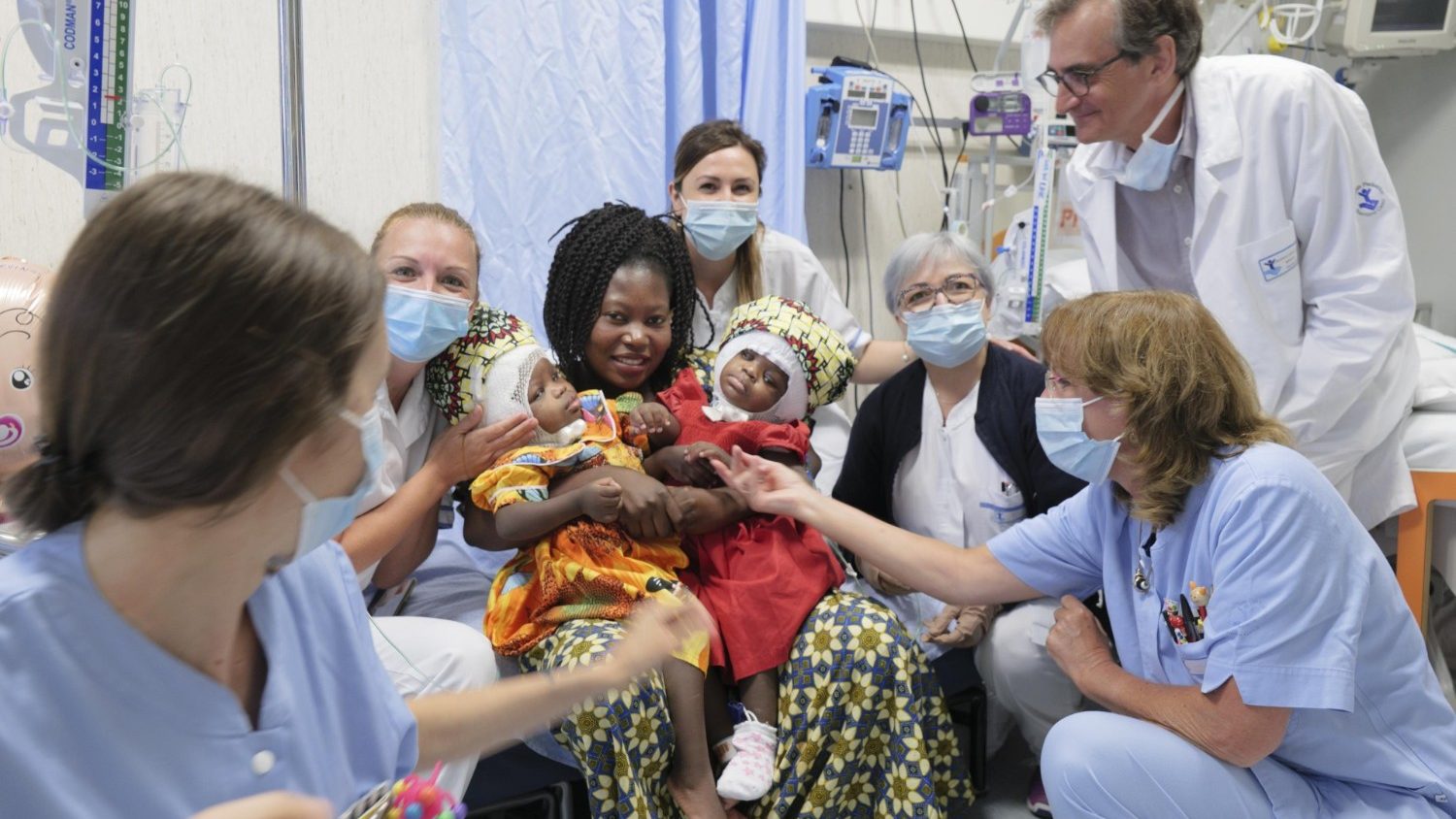 In her letter, Hermine Nzotto, a native of the Central African Republic (CAR), recounts her life as a “peasant girl from the forest” in the town of  Mbaiki, some 100 km from the capital Bangui, where her Siamese twins were born with fused skulls on June 29, 2018.

Hope of Holy Door in CAR

The twins were transferred to Bangui, where they were cared for in a hospital built with the help of Bambino Gesu Pediatric Hospital, a Vatican-owned hospital in Rome. The unit built in the Central African Republic was a project started after Pope Francis visited the war-torn country in November 2015.

In Bangui, the hospital made arrangements and transferred the mother and her daughters to Rome on September 10, 2018, to see if they could be separated.  At the end of the third surgery on June 5 that ran for 18-hours, involving some 30 specialists, the two girls, Ervina and Prefina, were successfully separated.  They were baptized by Pope Francis recently at a private ceremony at Casa Santa Marta in the Vatican.

During his 2015 visit to Bangui, the Pope had launched the Jubilee of Mercy by opening the Holy Door of the cathedral.  That door assumes an added significance for the mother and her daughters, as Nzotto expresses in her letter to the Pope.

Bridge for the needy

“Baptizing my miraculous Mary and Frances by Your Holiness assures me that God is truly close to the least,” Nzotto writes to the Pope, using the baby girls’ baptismal names. “If tomorrow my daughters are able to be among the luckiest children on earth who go to school and learn what I do not know and which I now desire to know, and one day to be able to read Bible verses to my daughters, then it is not a Holy Door that you opened in Bangui in 2015 that was closed a year later.

Rather, she continues, “it is a bridge that you built for eternity, which needy people like me and people of goodwill like the team of doctors who are treating my separated inseparable ones can cross”.

Pope knows what the world needs

In her letter, the mother of the two girls expresses her heartfelt gratitude to the doctors of the Bambino Gesù Hospital, Dr Mariella Enoc, the president of the hospital who arranged her transfer and the surgery and Dr Carlo Efisio Marras, the head of the Neurosurgery department, whose team “miraculously separated and resurrected” her daughters.

In conclusion, Hermine Nzotto writes, “Prayer is what can unite the people of the earth.”  Hence, she promises her prayers to Mary for Pope Francis saying, he who dared to defy mosquito bites and visit the CAR during the rebellion in 2015, knows best what to ask of the Virgin Mary for the world.

Share on FacebookShare on TwitterShare on PinterestShare on EmailShare on LinkedIn
Deceased Massachusetts bishop accused of sexual abuse had roots in New York archdioceseMauritius: fear of major ecological crisis