Home Test page Pope at Mass: ‘Jesus prays for each of us’

Pope at Mass: ‘Jesus prays for each of us’ 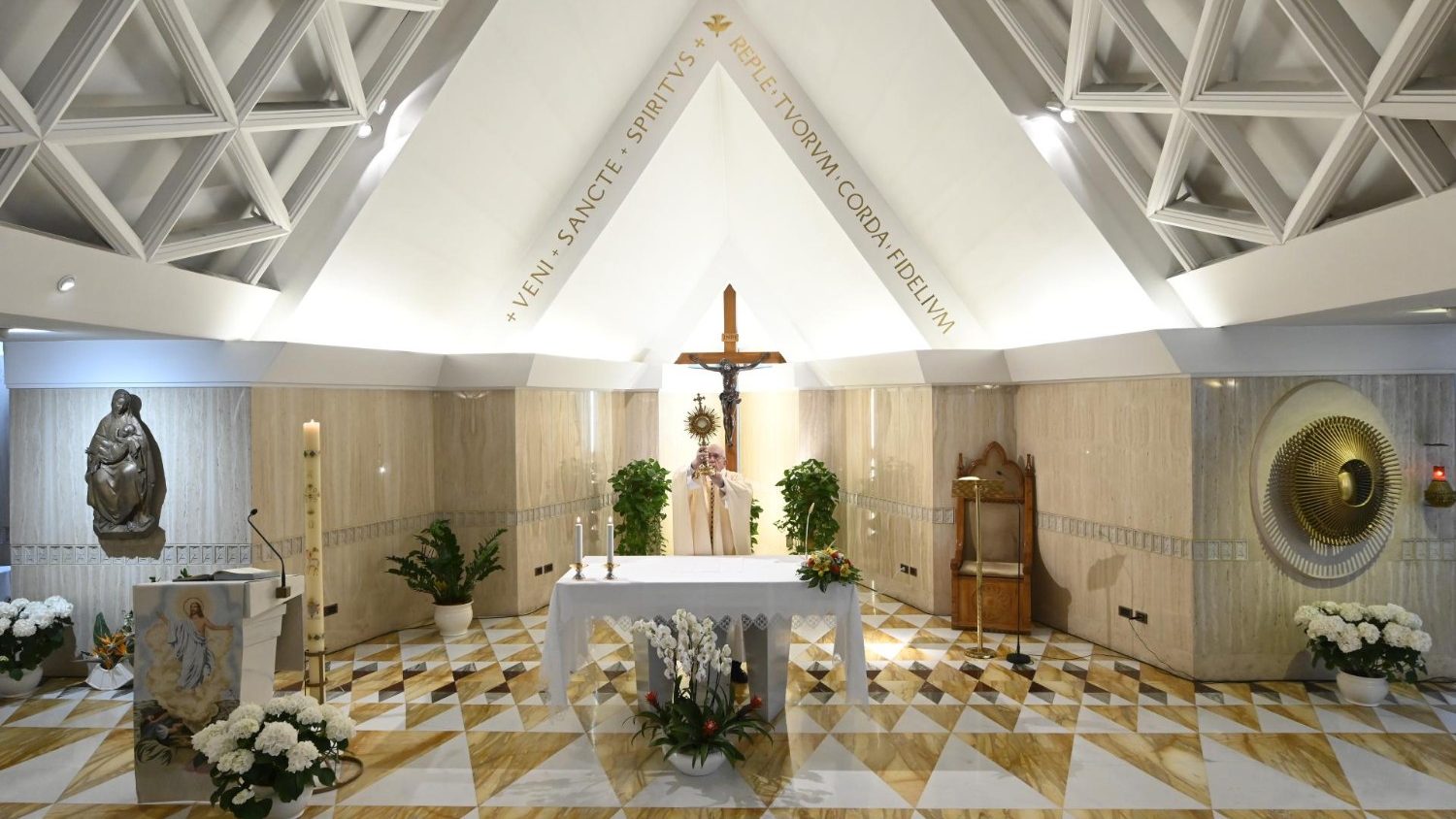 Celebrating morning Mass on Thursday, Pope Francis turned his thoughts to the many people suffering because of the Covid-19 pandemic.

“In many places, one of the effects of this pandemic is that many families find themselves in need, and they are hungry,” Pope Francis said. He made these remarks prior to beginning Mass at the Casa Santa Marta on Thursday morning. He continued, noting that unfortunately unscrupulous money-lenders are profiting from this situation.

“This is another pandemic, another virus: It’s a social pandemic,” he said.

Many families who are not working and do not have food to put on the table for their children, the Pope continued, are prey to usurers who end up taking the little that they have.

“Let us pray,” the Pope said, “for these families, for their dignity, and let us pray also for the usurers: that the Lord might touch their hearts and convert them.

Then, during his homily the Pope reflected on the liturgical readings of the day (Acts 5:27-33).

The courage of Peter

He said the first reading tells of when the Apostles were brought by soldiers to stand before the Sanhedrin and the high priest questioned them saying “We gave you strict orders to stop teaching in that name, the name of Jesus.”

And yet, he continued “you have filled Jerusalem with your teaching, and want to bring this man’s blood upon us.”

But the Pope said, the Apostles, and especially Peter, “courageously and boldly” upheld his faith saying “We must obey God. We are obedient to God and you are guilty.”

Pope Francis noted that Peter, is the same man who had denied Jesus, “who was full of fear and was even a coward.”

“How in the world did he arrive at this point?” he asked.

It is the Holy Spirit, the Pope explained, citing the Acts of the Apostles, “whom God has given to those who obey him” (Acts 5:32).

Peter, he continued could have chosen to compromise, to choose a softer tone when preaching with the people in order to be left in peace.

But he chose to undertake a journey in which he showed courage and boldness, the Pope said, noting that “in the history of the Church, the people of the Church have had to do this often in order to save the people of God”. At other times, the Church’s leaders have made compromises to save themselves, rather than “Holy Church”.

Upholding the figure of Peter who refused to compromise his faith, but chose to be courageous, the Pope said “he loved passionately, but he was also fearful.”

“He was a man who was open to God to the point that God reveals to him that Jesus is the Son of God, but then he falls into the temptation of denying Jesus,” the Pope recalled, but then he moved from temptation to grace.

Where did that strength – his secret – the Pope asked come from?

“And to Peter Jesus says:  ‘but I have prayed for you, so that your faith may not fail’ ” the Pope said.

Pope Francis concluded his homily saying that just as Jesus prays for Peter, he prays for all of us. Then he encouraged the faithful not only to pray to Jesus so that He may “give us one grace or another” but also to contemplate Jesus who shows the Father his wounds.

“Let us think about how Peter was able to progress on this path from being a coward to becoming a courageous person with the gift of the Holy Spirit. Thanks to Jesus’s prayer, (…) and let us be grateful that He prays for each of us.”

“We need to have more confidence,” Pope Francis reiterated, “more than in our own prayers,” in the prayers that Jesus, the intercessor, says for us: “Let us ask for the grace of allowing the Lord to teach us how to ask Him for the grace of praying for each one of us.”

Share on FacebookShare on TwitterShare on PinterestShare on EmailShare on LinkedIn
Despite protests, Newark archdiocese supports COVID limits on churchesReflections for the III Sunday of Easter