Home Test page Pope at Mass: Jesus made Himself sin

Pope at Mass: Jesus made Himself sin 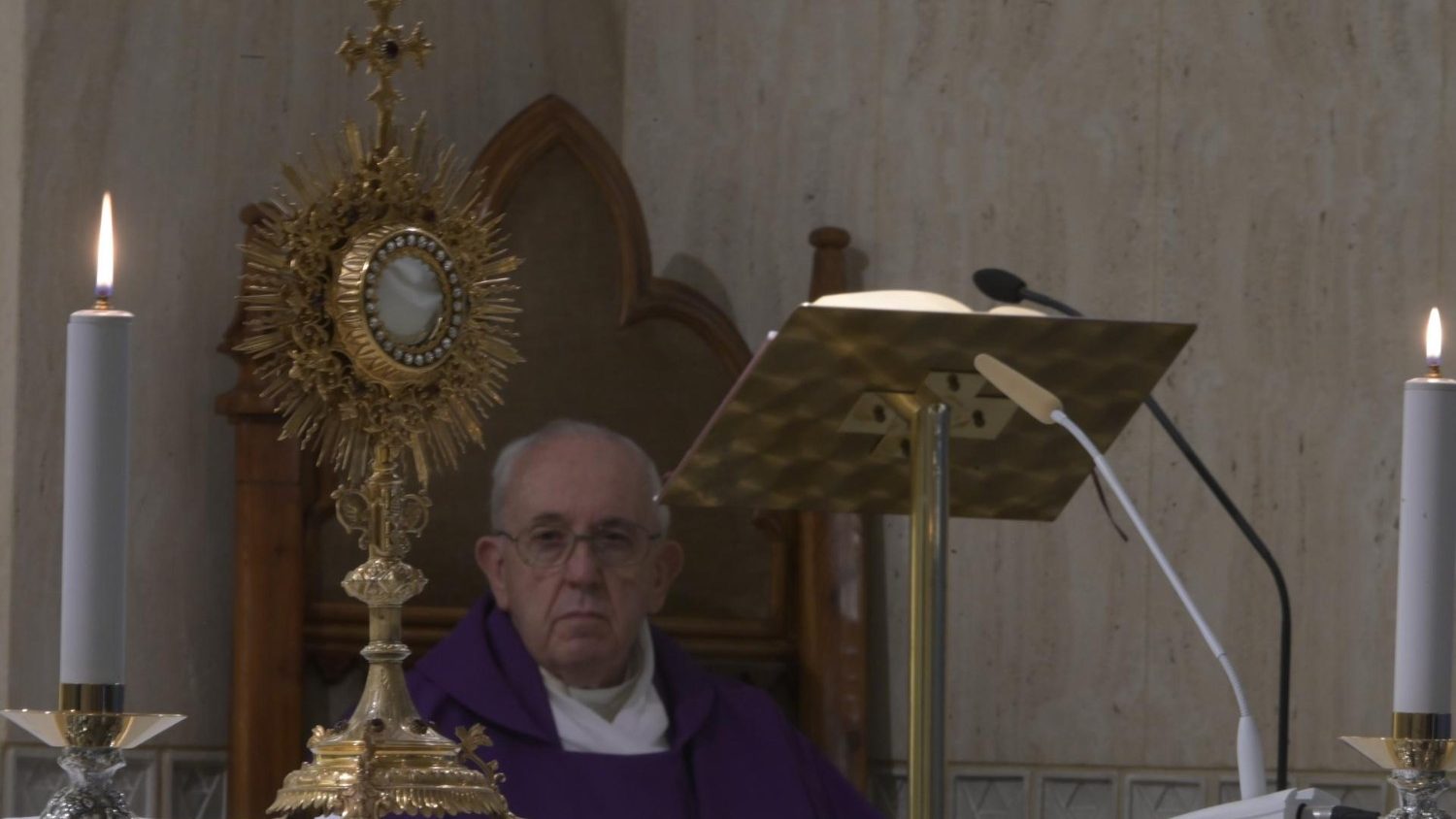 “We pray today for those who are homeless”, were the words with which Pope Francis introduced the Mass at the Casa Santa Marta on Tuesday morning.

“At this moment in which everyone is supposed to be at home, may society, men and women, realize this reality and help them, and that the Church might welcome them.”

During his homily, he reflected on the symbol of the serpent presented in both readings of the Fifth Tuesday of Lent (Numbers 21:4-9 and John 8:21-30).

“A serpent is certainly not a friendly animal”, Pope Francis said, beginning his homily.

“They’re always associated with evil. Even in Revelation, the serpent is specifically the animal that the devil uses in order to cause sin. In the Book of Revelation, the devil is called the ‘ancient serpent’, the one who from the beginning bites, poisons, destroys, kills.”

The people can no longer put up with the long journey. They complain that they have no food or water, and are tired of eating manna.

“It’s always the same music. ‘Why have you brought us up from Egypt to die in this desert?’ …. Their imagination…always went back to Egypt. ‘We were doing well there. We ate well.’

“It also seems that the Lord can’t put up with His people at this moment. He gets angry. The wrath of God is seen at times. And so, ‘the Lord sent among the people saraph serpents, which bit the people so that many of them died.’ At that time the serpent was always the image of evil. In seeing the serpents, the people saw their sin…what they had done wrong…. They repent.”

Pope Francis said he wonders if the serpent Moses mounted on the pole could have been idolatry. Rather than being idolatry, he said, “It is a prophecy, a proclamation of what will happen” in the future. Jesus Himself recalls the serpent mounted on a pole and applies it to Himself. To understand better, we need to put Jesus’ prophecy that He would be lifted up like the serpent on the pole, together with the more ancient prophecy.

“The core of the prophecy is that Jesus made Himself sin for us. He did not sin; He made Himself sin. As St. Peter says in his letter, ‘He bore all of our sins in Himself.’ And so, when we gaze on the crucifix, we think about the Lord who suffers, and all of that is true. But let’s stop a moment in order to arrive at the center of that truth. ‘At this moment you seem to be the greatest sinner! You made yourself sin.’ He took upon himself all of our sins…. There was a vendetta by the doctors of the law who didn’t want Him. All of that is true. But the truth that comes from God is that He came into the world to take our own sins upon Himself to the point of making Himself sin…. Our sins are there.”

Contemplate, pray, give thanks

Christians need to make it a habit of looking at the crucifix “in this light”, in the “light of the redemption” and as a reminder that Jesus did not pretend to suffer and die. Rather, it was the moment of His utter defeat. He was entirely alone with the burden of our sin that He had taken on Himself to the point of annihilation and the feeling of total abandonment by His Father, the Pope said.

“It’s not easy to understand this and should we think about it, we’ll never arrive at a conclusion. We can only contemplate, pray, and give thanks.”

Share on FacebookShare on TwitterShare on PinterestShare on EmailShare on LinkedIn
The shepherds we need—or the shepherds I want?Cardinal Vicar of Rome tests positive for coronavirus