Pope at Easter Vigil: ‘Even from the grave Jesus brings life’ 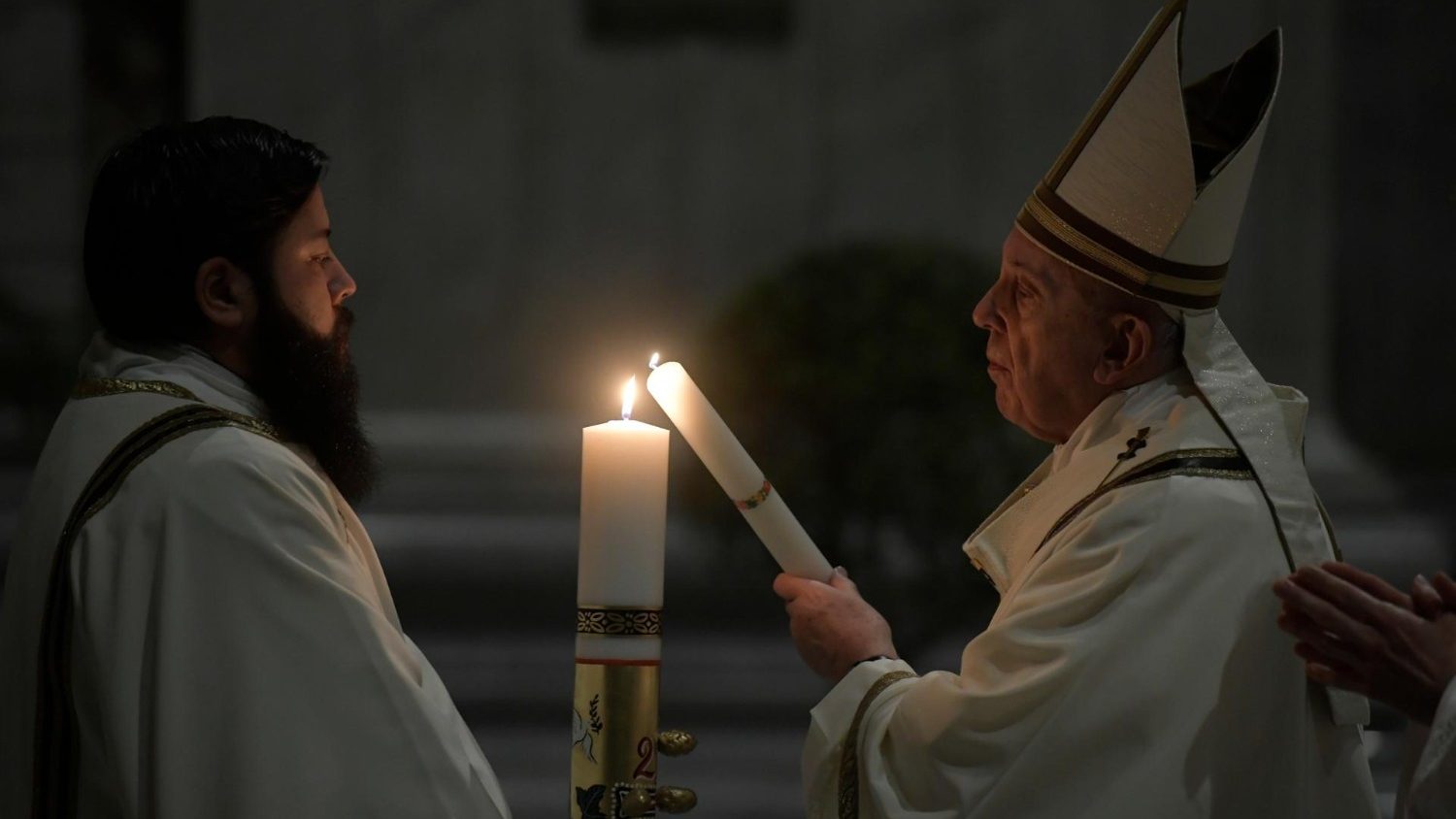 Pope Francis presided over the most solemn and noblest of all solemnities, the Easter Vigil, on Saturday evening in a near empty St Peter’s Basilica. Millions around the globe, however, joined the Vicar of Christ through television, radio, and other digital platforms, to hear the Easter proclamation resound once again in their hearts, in their homes, and in the entire world.

His homily focused on two gifts that the Risen Christ offers to every disciple of every age: hope and courage.

It was women who were active on the first Holy Saturday, Pope Francis noted. And we can relate to them in a particular way this year, he continued.

“They, like us, had before their eyes the drama of suffering, of an unexpected tragedy that happened all too suddenly. They had seen death and it weighed on their hearts.”

But the situation they had lived did not paralyze these women. Rather, they did something “simple yet extraordinary” — they prepared “at home the spices to anoint” Jesus’ body.

“They did not stop loving; in the darkness of their hearts, they lit a flame of mercy.”

Another woman, Our Lady, spent the day in prayer. That day, the Pope reminded us, would one day be dedicated to her honour.

“Jesus, like a seed buried in the ground, was about to make new life blossom in the world; and these women, by prayer and love, were helping to make that hope flower.”

With dawn comes hope, in the person of Jesus, whom the women meet.

“Do not be afraid, do not yield to fear: This is the message of hope. It is addressed to us, today. These are the words that God reeats to us this very night.””

Hope is our right, Pope Francis declared. It is a hope that comes from God. It’s not optimism, he clarified, but a “gift from heaven” that we have not “earned on our own”. “All will be well”, has been our chant in the past weeks, he acknowledged. But with the passing of the weeks, “the boldest hope can dissipate”.

“Jesus’ hope is different. He plants in our hearts the conviction that God is able to make everything work unto good, because even from the grave He brings life.”

Our hope is in a person who emerged from a place where no one else has ever emerged – a grave.

“He, who rolled away the stone that sealed the entrance of the tomb, can also remove the stones in our hearts…. He did not abandon us; He visited us and entered into our situations of pain, anguish and death. His light dispelled the darkness of the tomb: today He wants that light to penetrate even to the darkest corners of our lives.”

The Lord’s gift of courage can only be received by rolling away even the slightest stone we may have placed before our hearts. The light of the Risen Lord can thus penetrate our deepest fears. Just as Jesus preceded His disciples to Galilee, so “the Lord goes before us”, Pope Francis reminded us.

“It is encouraging to know that He walks ahead of us in life and in death. He goes before us to Galilee, that is, to the place which for Him and His disciples evoked the idea of daily life, family and work. Jesus wants us to bring hope there, to our everyday life. For the disciples, Galilee was also the place of remembrance, for it was the place where they were first called. Returning to Galilee means remembering that we have been loved and called by God.”

Galilee also signifies the place furthest from the “sacredness of the Holy City”. It was where heathens lived. That is where Jesus sent His disciples right after His resurrection. The Pope interprets this as a sign that His “message of hope should not be confined” only to holy places. It is meant for everyone, no matter where they live. We, Christians, need to “bring the song of life” wherever a Galilee exists around us, the Pope said. For if we “who have touched the Word of Life” don’t sing that song, he asked, who will?

“Let us silence the cries of death, no more wars! May we stop the production and trade of weapons, since we need bread, not guns. Let the abortion and killing of innocent lives end. May the hearts of those who have enough be open to filling the empty hands of those who do not have the bare necessities.”

“Today, as pilgrims in search of hope, we cling to you, Risen Jesus. We turn our backs on death and open our hearts to you, for you are Life itself.”