In recent months, as Russia’s war of aggression against Ukraine has shocked the world, Archbishop Sviatoslav Shevchuk, Major Archbishop of the Ukrainian Greek Catholic Church (UGCC), has emerged as a brave moral leader, recalling such twentieth century prelates who defended their flock during times of persecution like Stefan Wyszyński of Poland, Jozsef Mindszenty of Hungary, Oscar Romero of El Salvador, or Jaime Sin of the Philippines. 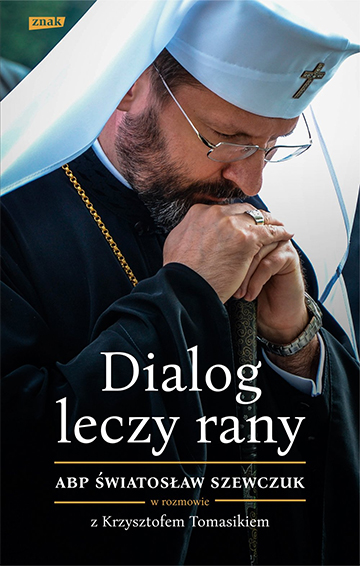 Dialog leczy rany (“Dialogue Heals Wounds”), a 2018 book-length interview with the archbishop conducted by the Polish journalist Krzysztof Tomasik of the Polish Catholic Information Agency and published, provides Catholic readers, especially the Latin Rite reader unfamiliar with Ukraine’s complex religious and socio-political situation, a better understanding of Shevchuk’s life, vocation, faith, and nation. It is also a stimulating opportunity to read the astute observations of one of the Church’s leading thinkers.

A man of dialogue

This book was written for a Polish audience, and so much of it deals with Polish-Ukrainian relations, which have historically been difficult, despite the fact that Poland has consistently been a leading defender of Ukrainian sovereignty (in 1991, Poland became the world’s first government to recognize Ukrainian independence) and has proven extremely generous towards Ukrainian refugees (even before the current war, between one and two million Ukrainian migrants had settled in Poland).

Throughout much of its history, western Ukraine was a Polish colony, and both during pre-partition Poland and in the twentieth-century interbellum was treated chauvinistically by Warsaw. Meanwhile, many Poles feel bitterness for the crimes of Ukrainian nationalists against Poles during the Second World War, a resentment that has been compounded by the fact that in recent years Ukrainian Nazi collaborators have been publicly treated as national heroes in Ukraine.

Archbishop Shevchuk has been a leading figure in the advancement of Polish-Ukrainian dialogue, and before Russia’s invasion of Ukraine, he frequently gave lectures and celebrated Masses in Poland.

Interestingly, the interview was conducted in Polish. Shevchuk does not belong to Ukraine’s Polish minority; as he explains in the book, he learned Polish in the 1980s. Under Soviet rule, when the Ukrainian Greek Catholic Church was sentenced to the catacombs, Shevchuk attended Polish Mass in the Roman Catholic parish in his hometown of Stryi, a Polish city before World War II. Furthermore, his father built an antenna in order to watch Polish television channels, while the future archbishop read Karol Wojtyła’s Love and Responsibility as well as works by Adam Mickiewicz and Henryk Sienkiewicz in the original Polish.

Shevchuk is not a historian, but a shepherd. The interview contains relatively little analysis of particular historical events. He does not play the role of a bookkeeper who keeps a balance sheet of Polish and Ukrainian injuries. Instead, he repeatedly implores Poles and Ukrainians to overcome their mutual prejudices and build a future based on Christian love and forgiveness.

Shevchuk condemns nationalism, seeing it as a perversion of the virtue of patriotism. In formulating his view of the difference between nationalism and patriotism, Shevchuk references St. John Paul II’s Memory and Identity. He tells Tomasik:

Patriotism consists of building on the fundament of love, which is a Christian virtue. Patriotism does not close us off from one another, but it expands our horizons and fills our hearts. Only a patriot who loves his fatherland can accept his neighbor and forgive him. Meanwhile, extreme nationalism is built on hatred and egotism. It closes oneself off from his neighbor and another nation. It creates the illusion that one’s neighbor does not exist or denies his right to exist.

A Ukrainian in Buenos Aires

In 2009, Shevchuk was appointed auxiliary bishop of the Ukrainian Catholic Eparchy of Santa María del Patrocinio in Buenos Aires, a suffragan see of the Archdiocese of Buenos Aires, then headed by Cardinal Jorge Mario Bergoglio. Just thirty-eight, he was then the youngest Catholic bishop in the world. Shevchuk was already familiar with Argentina, having studied there in the early 1990s.

Shevchuk describes the future Pope Francis as a very warm, mentor-like figure. “I truly felt that Cardinal Bergoglio was my father in my episcopal service,” he says. “He took me by the hand and step by step slowly led me as a father leads his child. He taught me to be a bishop.”

Shevchuk also recalls the great suffering Cardinal Bergoglio felt at the time due to accusations that he was complicit in the crimes of Argentina’s former military regime; since then, these insinuations have been thoroughly debunked, and Nello Scavo’s 2014 book Bergoglio’s List documents how, in fact, the future pope courageously aided victims of the junta.

Yet Shevchuk is critical (albeit respectfully so) of some aspects of Francis’ pontificate, especially his 2016 Havana Declaration which he signed with Patriarch Kirill, Orthodox Patriarch of Moscow. He believes that the declaration’s description of the Ukrainian Greek Catholic Church as an “ecclesial community,” a term ordinarily reserved for Protestant groups, to be disrespectful to his Church’s simultaneous distinct identity and community with Rome.

Shevchuk also accuses the document of rehashing Russian Orthodox propaganda’s canard that the Greek Catholic Church is interested in interested in aggressively swiping Orthodox sheep. The document does not explicitly give the UGCC to evangelize. Shevchuk’s riposte is: “If a Church does not evangelize, it does not grow and thus it dies.”

One chapter of Shevchuk and Tomasik’s book is devoted to explaining precisely what the Ukrainian Greek Catholic Church is and its dramatic history. Although in interwar Poland Greek Catholics were the largest religious minority (due to the fact that western Ukraine was under Polish rule) and in recent years the number of Greek Catholics in Poland has been mushrooming due to growing Ukrainian immigration (and, presently, a huge inflow of Ukrainian refugees), most Poles know little about their Greek Catholic brothers and sisters.

I must confess that for many years I wondered why Eastern Catholics from Ukraine, nowhere near Greece, were called “Greek.” Apparently, many other Poles are equally puzzled, as Shevchuk explains that this refers to the fact that the Greek Catholic Church is descended from the Byzantine Church in Constantinople, not Rome. Yet, it must be emphasized, while the UGCC’s Divine Liturgy is different in ways from the western Mass, and its rules regarding priestly celibacy are different (married men can be ordained, but priests cannot marry after ordination, and bishops must be celibate), its members are just as Catholic as we Latins and are in full communion with the pope. [Editor’s note: See CWR’s 2017 interview with Fr. Richard Janowicz for more about the UGCC Church in the U.S.]

Another remarkable aspect of this Church’s history is its vibrant emergence from communist persecution. Under Soviet rule, the UGCC was not merely harassed; the Church’s existence was completely banned. Yet after the fall of communism, many parishes, the Ukrainian Catholic University in Lviv (one of Ukraine’s most prestigious universities), and many other institutions were reopened; according to Shevchuk, the average age of a Ukrainian Greek Catholic priest is just thirty-five.

One reason I think that Shevchuk’s and Tomasik’s book deserves an English translation is that American Catholics, overwhelmingly of the Latin Rite, arguably know even less than their Polish counterparts about their Eastern Catholic brethren. And while perhaps not on such a large scale as in Poland, a major influx of Ukrainian refugees to the United States is in progress.

The dynamism of today’s UGCC notwithstanding, Archbishop Shevchuk is quick to note that Ukraine is not a Christian Shangri-la that has escaped secularism. He notes that the nation’s abortion rate is extremely high, and Ukraine’s permissive abortion legislation has not been amended since the fall of the USSR. Meanwhile, about half of Ukrainian marriages end in divorce. Shevchuk also notes the strong pressures from the West for Ukraine to adopt the LGBT agenda.

His response to such challenges is orthodox but expressed from original vantage points. With regards to the situation of individuals struggling with homosexual tendencies who want to live chastely but are bombarded by the LGBT industry, Shevchuk expresses concern for their souls:

In practice, only the Catholic Church speaks of pastoral care for persons who discover homosexual tendencies. […] Its proponents [of the LGBT ideology] try to convince such a person that everything is all right, that what he feels is in accordance with his nature. I think that this is the worst thing that can happen because even if someone tells him of his homosexual tendencies and even if he accepts this in his conscience and everyday life, this will cause grave suffering. […] Just as communism once was born of the pain, needs, and poverty of the working class and later turned into a system of oppression, similarly the homosexual ideology preys on human pain and can turn into a new totalitarian ideology.

In August, Pope Francis will create well over a hundred cardinals in eight consistories. By any measure, Shevchuk should be one of them. Previous Major Archbishops of the UGCC have been made cardinals, and Shevchuk’s and Francis’ friendship goes back to their Buenos Aires days. Furthermore, Francis has appointed numerous cardinals from the “peripheries”: nations with Catholic minorities or that are religiously diverse, as well as countries suffering from war, political oppression, or poverty. Ukraine meets all these conditions.

At a time when Ukraine is suffering a brutal foreign invasion, giving the red hat to Shevchuk would boost the Ukrainian people’s morale, just as John Paul II’s naming Vinko Puljić, Archbishop of Vrhbosna, in 1994 amidst the horrific Bosnian War was a sign of solidarity with the beleaguered people of Bosnia and Herzegovina.

Hopefully, Shevchuk will some day be made a cardinal. Reading his interview with Krzysztof Tomasik reveals that he is truly one of the great Catholic bishops of today, a man committed to dialogue, defender of the oppressed, and sharp thinker about the many ideologies that make up today’s Zeitgeist.

Intelligent, multilingual (he knows, among other languages, Spanish, which is spoken by two-fifths of the world’s Catholics), and a humanitarian hero in an inhuman war, one is tempted to speculate if Shevchuk could someday become the second Slavic pope.

Share on FacebookShare on TwitterShare on PinterestShare on EmailShare on LinkedIn
Pro-abortion protesters disrupted Mass at Catholic church in ChicagoU.S. bishops call for change after Highland Park shooting