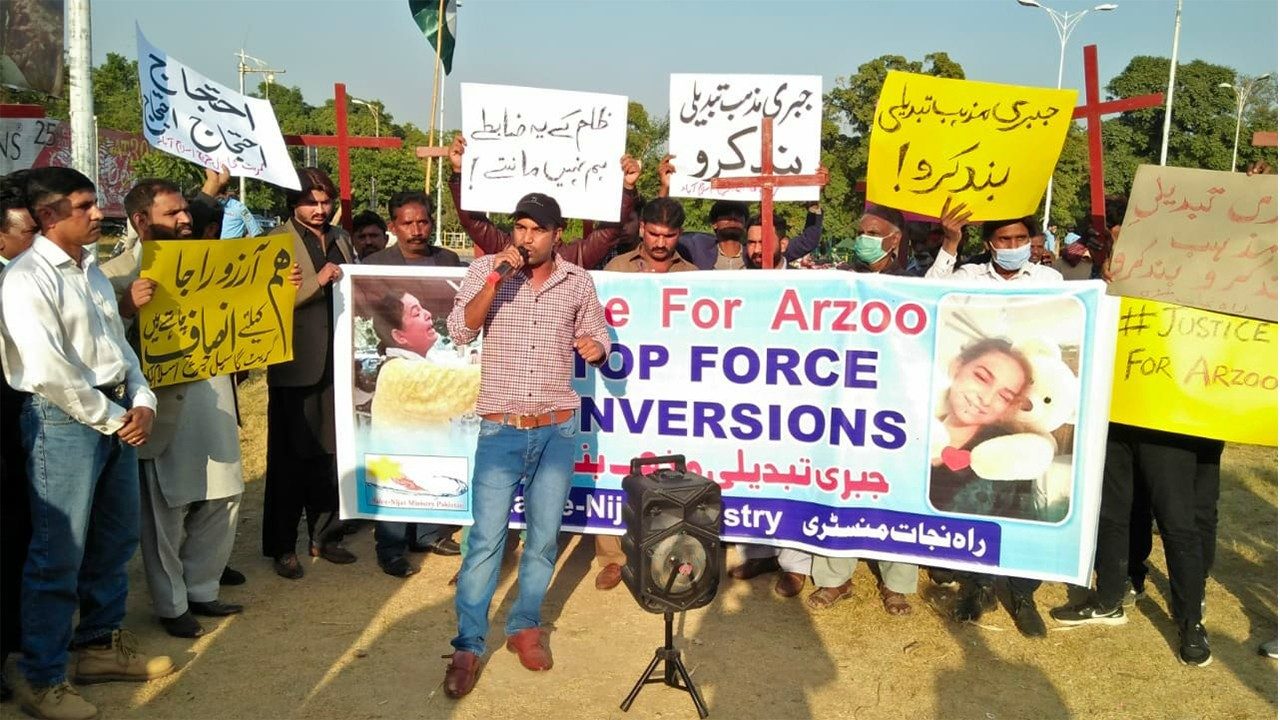 Caritas Karachi and the Catholic Women’s Organization (CWO) jointly organized the seminar on Nov. 13 in Kausar Naizi Colony, a Christian neighbourhood of St. Jude’s Parish. The event assumed an added urgency following the recent case of Arzoo Raja, the 13-year old Christian girl who was abducted on Oct. 13 while playing outside her home in Karachi’s Railway Colony. She was forcibly converted and married to Ali Azar, a 44-year-old Muslim man.

Her family is still fighting a legal battle for her custody. The case sent shockwaves throughout Pakistan, prompting religious minorities, particularly Christians, to hold nationwide protests.

Tabassum Yousaf, a high court lawyer and counsel for Arzoo, shed light on the legal rights of minority girls as guaranteed by the constitution of Pakistan.  “Although abduction of an individual for the purpose of forced marriage is a criminal offense in Pakistan, it is one of, if not the most, widespread reported crimes against women in the country,” she said.

Yousaf advised girls on how to safeguard themselves against abduction, forced conversion and marriage, such as by memorizing the cellphone numbers of their parents and siblings. She called on mothers to spend time with their daughters, befriend them, patiently listen to their problems and address them with love, care and respect.  The lawyer urged all to reinforce their commitment to provide quality education and equal opportunities to their girls, starting from the family.

Role of mothers and prayer

According to Sister Catherine Qasir, a CWO coordinator, mothers play a very important role in building the family and protecting young girls from being forced to change their religion.  “We must pray daily with all family members to spiritually strengthen and renew our faith in Jesus Christ and to fight against the forces of evil,” she said.

Mansha Noor, executive secretary of Caritas Karachi, said Arzoo’s case provides a useful opportunity for mothers and girls to learn about the menace of forced conversion and child marriage and their negative impact on society. “What we learned from this seminar we must share with others and start implementing them in our family if we want to save and protect young girls and children,” Noor said.

She pointed to the importance of praying in the family as stressed by Mother Teresa. “The family that prays together stays together, and if they stay together they will love one another as God loved each one of them,” she said.

The Sindh High Court on Oct. 27 upheld the marriage of Arzoo, based on a fake affidavit produced by her purported husband, Ali Azar, claiming the girl was 18 and had converted on her own. The court prevented police from arresting the suspect and his accomplices.

However, following protests by human rights and religious groups and the application filed by the provincial government of Sindh, the court on Nov. 2 surprisingly reversed its ruling and ordered the police to find Arzoo and move her to a shelter home. The girl was rescued later that day.

A medical board set up by the Sindh High Court to determine Arzoo’s age on Nov. 9 confirmed her to be a minor. According to Jibran Nasir, the counsel for Arzoo’s parents, the court has recognized Arzoo’s age to be 13 according to official documents by the National Database and Registration Authority (NADRA).

Nasir said that at this stage only the question of child marriage has been settled, but the court has yet to determine whether Arzoo could have converted to Islam on her own given her age of 13. Arzoo still remains in a shelter home.

Pakistan Catholic Bishops’ Conference (PCBC) also discussed Arzoo’s case at its biannual meeting in Lahore on Nov. 5-6. The bishops noted with grave concern the rising number of abductions, forced conversions and forced marriages of girls among the minority communities in Pakistan. “The bishops’ conference condemned the kidnapping, forced conversion and marriage of the minor girl Arzoo Raja with a man more than three times her age and also other such incidents,” PCBC president, Archbishop Joseph Arshad said in a press release.

According to a recent United Nations report, child marriages are still commonplace across South Asia. In Pakistan, nearly 25% of women in their early 20s were married by the time they are 18, the report found. UNICEF, the United Nations children’s fund, says that Pakistan has the sixth-highest number of absolute child brides in the world – nearly 1.91 million.  India has over 15.5 million child brides, the highest number in the world.

Share on FacebookShare on TwitterShare on PinterestShare on EmailShare on LinkedIn
Economy of Francesco: ‘A better global economy starts with each of us’Ethiopia says army capture town in Tigray