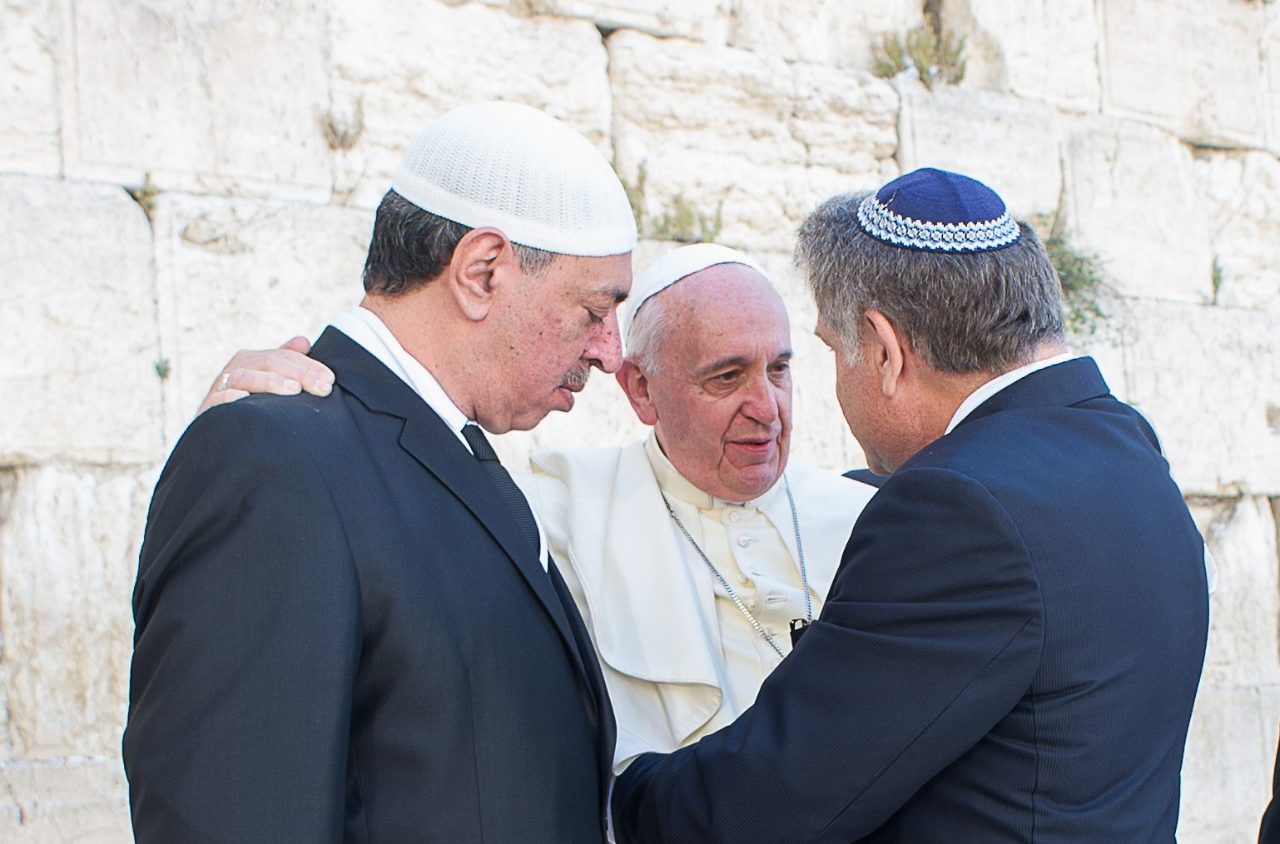 The conciliar Declaration Nostrae aetate — approved by the Fathers of Vatican II and promulgated by Pope Paul VI on 28 October 1965 — marked an irreversible turning point in relations between the Catholic Church and Judaism, in the wake of the steps taken by Pope John XXIII. The fruit of a long and careful drafting process, it also significantly changed Catholicism’s approach toward non-Christian religions, and is considered a foundational text for dialogue with other religions.

The unique relationship between Christianity and Judaism

The central focus of the Declaration is the relationship with Judaism: “As the sacred synod searches into the mystery of the Church, it remembers the bond that spiritually ties the people of the New Covenant to Abraham’s stock… Since the spiritual patrimony common to Christians and Jews is thus so great, this sacred synod wants to foster and recommend that mutual understanding and respect which is the fruit, above all, of biblical and theological studies as well as of fraternal dialogues” (NA, 4). These words acknowledge the Jewish roots of Christianity, and the unique relationship that exists between the Christian faith and Judaism, as John Paul II pointed out in April 1986 when he visited the Synagogue of Rome. As a theologian, Joseph Ratzinger had also reflected on this theme; and when he visited the same Synagogue in January 2010, as Bishop of Rome, he recalled, “The teaching of the Second Vatican Council has represented for Catholics a clear landmark to which constant reference is made in our attitude and our relations with the Jewish people, marking a new and significant stage. The Council gave a strong impetus to our irrevocable commitment to pursue the path of dialogue, fraternity and friendship…”

An end to accusations of deicide

Another decisive statement in the Declaration concerns the condemnation of anti-Semitism. While decrying “hatred, persecutions, displays of anti-Semitism, directed against Jews at any time and by anyone”, the conciliar Declaration also explains that the responsibility for the death of Jesus must not be attributed to all Jews: “True, the Jewish authorities and those who followed their lead pressed for the death of Christ; still, what happened in His passion cannot be charged against all the Jews, without distinction, then alive, nor against the Jews of today” (NA, 4).

Rays of truth reflected in other religions

In its opening section, concerning Hinduism, Buddhism, and other religions in general, Nostrae aetate explains that they “try to counter the restlessness of the human heart, each in its own manner, by proposing ‘ways,’ comprising teachings, rules of life, and sacred rites.” It continues, “The Catholic Church rejects nothing that is true and holy in these religions. She regards with sincere reverence those ways of conduct and of life, those precepts and teachings which, though differing in many aspects from the ones she holds and sets forth, nonetheless often reflect a ray of that Truth which enlightens all men and women” (NA, 2).

Esteem for adherents of Islam

An important paragraph is dedicated to the Islamic faith: “The Church regards with esteem also the Moslems. They adore the one God, living and subsisting in Himself; merciful and all- powerful, the Creator of heaven and earth, who has spoken to men; they take pains to submit wholeheartedly to even His inscrutable decrees, just as Abraham, with whom the faith of Islam takes pleasure in linking itself, submitted to God. Though they do not acknowledge Jesus as God, they revere Him as a prophet. They also honor Mary, His virgin Mother; at times they even call on her with devotion. In addition, they await the day of judgment when God will render their deserts to all those who have been raised up from the dead. Finally, they value the moral life and worship God especially through prayer, almsgiving and fasting” (NA, 3).

Paul VI and the “confessors of the Muslim faith”

Significant steps were taken by various popes in dialogue with the Islamic world in the years following the promulgation of Nostrae aetate. Among them were the words spoken by Paul VI during his visit to Uganda in the summer of 1969. Speaking to the Dignitaries and Representatives of Islam, the Pope paid homage to the first African Christian martyrs, making a comparison that associated “the confessors of the Muslim faith” with the martyrdom suffered at the hands of the sovereigns of local tribes: “We are sure to be in communion with you,” he said, when we implore the Most High to arouse in the hearts of all believers of Africa the desire for reconciliation, for forgiveness, so often recommended in the Gospel and in the Quran.” Pope Paul added, “And how can we not associate with the piety and fidelity of the Catholic and Protestant martyrs the memory of those confessors of the Islamic faith, which history reminds us were the first, in 1848, to pay with their lives for refusing to transgress the precepts of their religion?”

In November of 1979, during his meeting with the small Catholic community in Ankara, Turkey, Pope John Paul II reaffirmed the Church’s esteem for Islam. “Faith in God,” he said, “professed in common by the descendants of Abraham — Christians, Muslims, and Jews — when it is lived sincerely and brought to life, is the sure foundation of the dignity, brotherhood, and freedom of men and women, and the principle of upright moral conduct and social coexistence. And beyond that: As a consequence of this faith in the God, who is Creator and transcendent, humankind stands at the summit of creation.”

The speech in Casablanca

Pope John Paul II’s Speech to young Muslims, which took place in Casablanca, Morocco in August 1985, was another milestone on this journey. “We Christians and Muslims have many things in common, as believers and as human beings,” he said on that occasion. “We live in the same world, marked by many signs of hope, but also by multiple signs of anguish. For us, Abraham is a very model of faith in God, of submission to His will and of confidence in His goodness. We believe in the same God, the one God, the living God, the God who created the world and brings His creatures to their perfection.” Pope John Paul II emphasized, “Dialogue between Christians and Muslims is today more necessary than ever. It flows from our fidelity to God and supposes that we know how to recognize God by faith, and to witness to him by word and deed in a world ever more secularized and at times even atheistic.”

To Assisi with John Paul and Benedict

The following year, on 27 October 1986, the Pontiff invited representatives of the world’s religions to come to Assisi to pray for peace, which was under threat. The Assisi meeting became a symbol for dialogue and common commitment among believers of different faiths. “The coming together of so many religious leaders to pray”, Pope John Paul said on that occasion, “is in itself an invitation today to the world to become aware that there exists another dimension of peace and another way of promoting it which is not a result of negotiations, political compromises or economic bargaining. It is the result of prayer, which, in the diversity of religions, expresses a relationship with a supreme power that surpasses our human capacities alone.”

Celebrating the 25th Anniversary of the event in Assisi, Pope Benedict XVI warned against the threat posed by the abuse of God’s name to justify hatred and violence, noting the use of violence by Christians throughout history: “We acknowledge it with great shame,” he said. However, he continued, “the denial of God has led to much cruelty and to a degree of violence that knows no bounds, which only becomes possible when man no longer recognizes any criterion or any judge above himself, now having only himself to take as a criterion. The horrors of the concentration camps reveal with utter clarity the consequences of God’s absence.”

From the Council to the Abu Dhabi Document

The conciliar Declaration Nostrae aetate concludes with a paragraph dedicated to “universal fraternity”: “We cannot truly call on God, the Father of all, if we refuse to treat in a brotherly way any man, created as he is in the image of God. Man’s relation to God the Father and his relation to men his brothers are so linked together that Scripture says: ‘He who does not love does not know God’ No foundation therefore remains for any theory or practice that leads to discrimination between man and man or people and people, so far as their human dignity and the rights flowing from it are concerned” (NA, 5).

This tradition is reflected in the Document on Human Fraternity signed by Pope Francis and the Grand Imam of Al-Azhar, Ahmad Al-Tayyeb on 4 February 2019 in Abu Dhabi, which begins, “In the name of God who has created all human beings equal in rights, duties and dignity, and who has called them to live together as brothers and sisters, to fill the earth and make known the values of goodness, love and peace.”