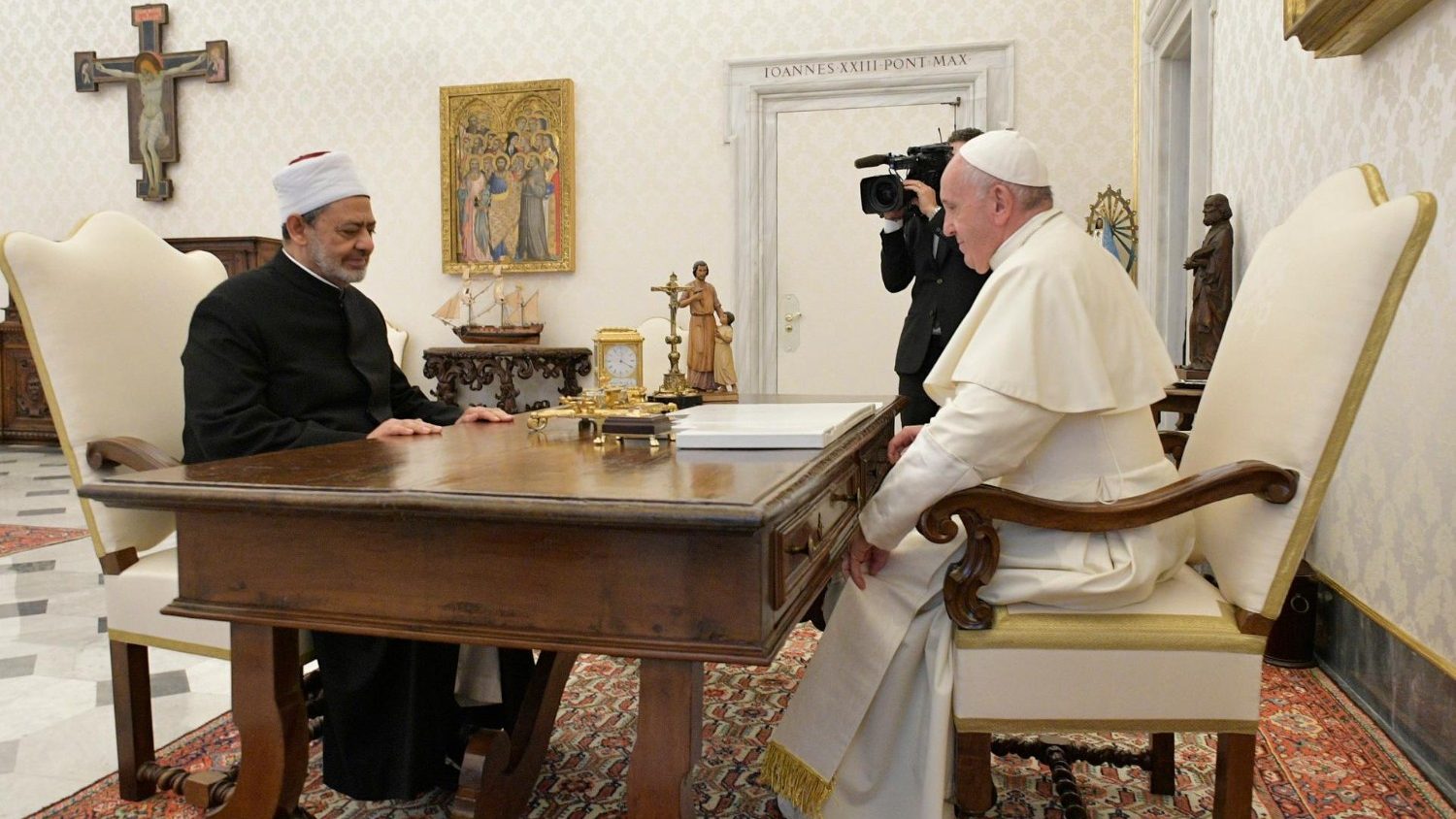 “The Pope and the Grand Imam: A Thorny Path – A Testimony to the Birth of Human Fraternity” is a newly published book by Judge Mohamed Abdelsalam, Secretary-General of the Higher Committee of Human Fraternity (HCHF). The book gives a detailed account about the stages in the creation of the Human Fraternity Document (HFD), before it was eventually signed on 4 February 2019 by Pope Francis and Ahmed el-Tayeb, the Grand Imam of Al-Azhar, in Abu Dhabi.

A press release, published by the Grand Imam,  describes the book as recounting the “bold, accelerated” steps taken by the Pope Francis and the Grand Imam “towards promoting interfaith dialogue”. Their “unique” relationship, the author says, began with the Grand Imam’s first visit to the Vatican to which Pope Francis responded with a visit to Al-Azhar headquarters in Cairo, Egypt. “Subsequently, the fraternal bond between the two figures deepened through their several joint meetings, of which the author witnessed. In one of these meetings, the idea of signing a document on human fraternity was conceived”, reads the statement.

The journey towards the Document

Continuing the press release, the Grand Imam describes the author’s “in-depth account of the milestone moments in the preparations for the HFD”.

It notes that the book features two forewords: one by the Grand Imam and one by the Pope. The book also “includes a special section featuring comments on the book by a group of high-profile politicians, academics, and leaders from around the world”.

“The Grand Imam described the book as a significant account of all the stages in creating the historic Document on Human Fraternity. He further noted that the book is truly a work of art, written in a very beautiful and accurate style, and not full of a high-flown intellectualism, flights of fantasy or partiality, or even rigidity. In his foreword, His Holiness Pope Francis wrote that the book registers the significant moments in the journey leading up to signing the HFD”, reads the statement.

According to the press release, the author, who currently serves as Secretary-General of the HCHF, was “an eyewitness to most stages in the creation of the Document”, as he previously served as a special advisor to the Grand Imam for more than eight years. During this period, Judge Abdelsalam participated effectively in “promoting interfaith dialogue and achieving rapprochement among religious institutions, the most significant of which is the relationship between Al-Azhar and the Vatican”.

The book has been released in Arabic and English and is expected to be translated into several other languages. Now available in many libraries, the book will be showcased at Arab and international book fairs and will be available on international bookstores’ websites.

“Judge Mohamed Abdelsalam said that he was keen to document the significant moments throughout the human fraternity journey. He felt it important for the reader to know the motives, circumstances, and challenges that accompanied the creating of such a historic document”, reads the statement.

He further pointed out that the phrase “A Thorny Path” in the book’s title indicates “the obstacles and difficulties that were only overcome by the persistence of the two great religious figures”, Grand Imam Ahmed Al-Tayeb and “his brother” Pope Francis, and their firm belief in the significance of such Document and its putting into practice, regardless of challenges. The author also commended the UAE leadership’s sincere patronage of the Document.

Finally, the press release notes that the author has dedicated the book to his homeland, Egypt, in recognition of the favours the country has bestowed upon him, as well its place as “a role model of coexistence and peace”.

Share on FacebookShare on TwitterShare on PinterestShare on EmailShare on LinkedIn
Three relics of Christ’s Passion housed in SpainCatholic group: Mozambique massacre should prompt attention, response