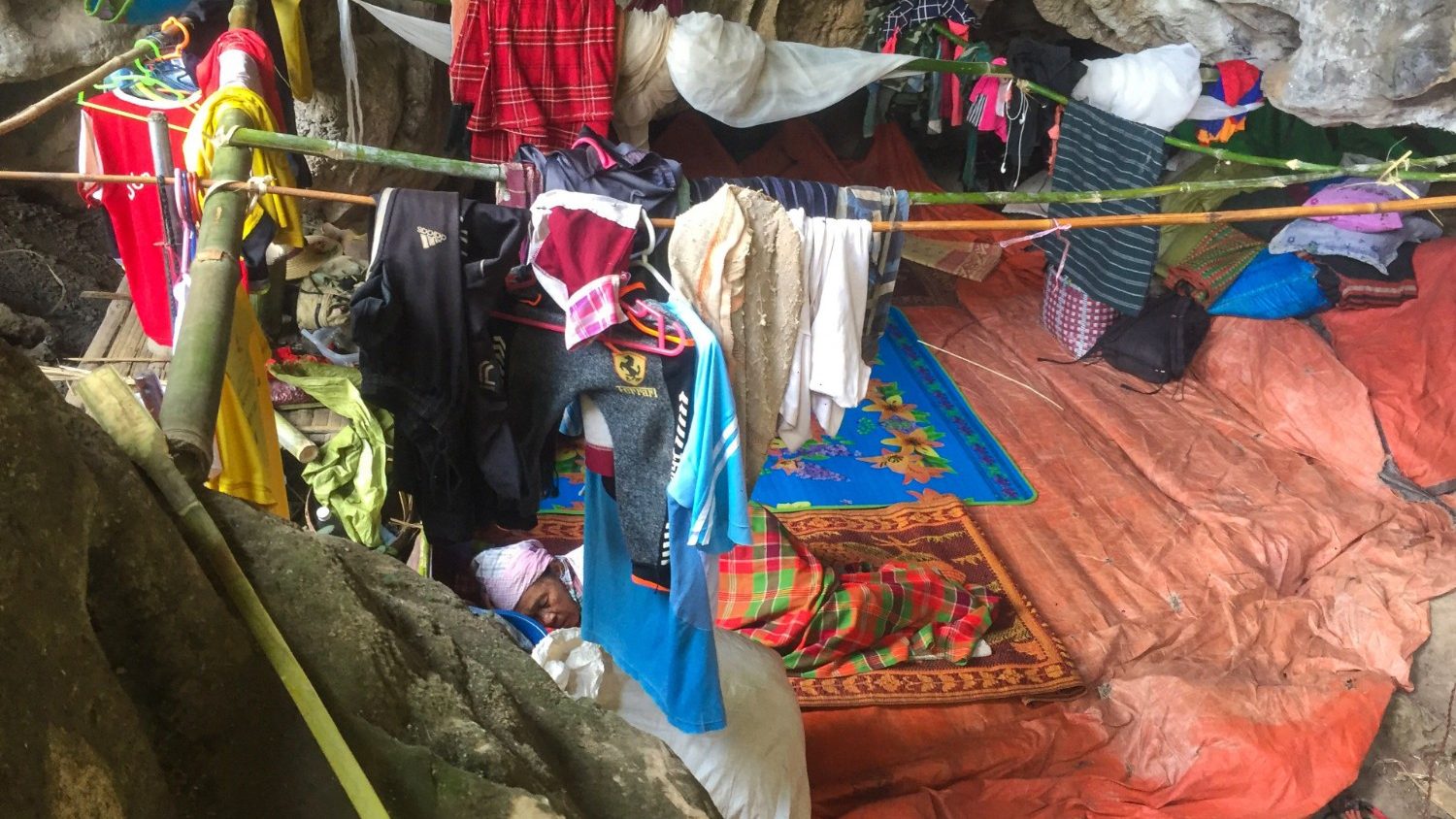 The Catholic Bishops of Myanmar have appealed for a “humanitarian corridor” for thousands of displaced people trapped and starving in conflict zones. They have also appealed for respect for places of worship and other neutral sites where many innocent civilians have sought shelter.

“As our country goes through her challenging times this appeal is made on humanitarian grounds,” said a message by the Catholic Bishops Conference of Myanmar (CBCM). “We are not politicians, we are faith leaders, accompanying our people in their journey towards human dignity,” the CBCM said in the message released at the end of its plenary assembly in Yangon, June 8-11.

The impoverished south-east Asian nation has been plunged into chaos since the Feb. 1 military coup that ousted the elected government and detained its leader, Aung San Suu Kyi.  Protests and strikes against the coup have paralyzed parts of the economy.

The crisis has also re-ignited Myanmar’s old conflicts between the military and some of the armed ethnic organizations.  Areas occupied by the Kachin, Chin, Karen and Kayah ethnic groups, who have been facing oppression and persecution at the hands of the military for decades, are largely Christian.  An estimated one-third of Myanmar’s territory – mostly the border regions – is currently controlled by 20-odd armed rebel outfits. The military has stepped up its offensive against ethnic guerrillas and anti-coup resistance groups by deploying fighter jets and heavy artillery.  Many civilians caught up in these clashes have fled their homes and villages and sought shelter in places of worship or gone into jungles where they lack food and other basic needs.

Christians are a minority in the predominantly Buddhist country, accounting for 6.2 percent of its 54 million population. Myanmar Catholics represent about 1.5 percent of the population.

The message signed by the 13 CBCM members has four appeals. Firstly, they noted, “Thousands of our people, especially the old and the children are starving in the jungles.” “Starvation of the innocent people is the most heart wrenching experience. These are our citizens and they have basic right to food and safety.”  Hence, “We plead with all to kindly allow the humanitarian corridor to reach out to the starving masses wherever they are.”

Places of worship under attack

Secondly, the bishops noted that in the recent conflict, thousands have sought safety in the churches. Four churches in Loikaw Diocese in Kayah state have come under military artillery fire and thousands sheltering there fled elsewhere or into the jungle. The bishops called for observing international norms in times of war regarding sanctuaries. Churches, pagodas, monasteries, mosques and temples, including schools and hospitals, are recognized as neutral places of refuge during conflicts and should not be targeted. “We appeal that these places are not to be attacked and the people who seek refuge should be protected,” the bishops said.

The bishops also made an appeal to all the dioceses of the country to intensify their spiritual campaign. “Our destiny is in God’s hands”, who “must change the hearts of all, bringing peace to this nation”. “As a nation we have suffered a lot and this should end,” they said, inviting each diocese to a period of “intense prayer, seeking compassion in the hearts of all and peace to this nation”. They thus appealed to all dioceses to offer daily Mass for peace and reconciliation of the country, to recite the prayer of the CBCM after Mass, to observe an hour of daily adoration alone or in a group, and to pray the rosary, asking the maternal protection of Mary, Mother of help. This is in continuation of what CBCM president Cardinal Charles Bo of Yangon had urged ahead of the Marian month of May.

Lastly, the bishops of Myanmar urged all parties to work for lasting peace. They noted that the last 7 decades that their country has been in conflict, have caused only tears and crushed innocent people.  However, the nation needs to “invest in peace”. Because “nobody has won a war in this country” the bishops wrote, “it is our duty to work towards peace”.

“This country deserves to join the community of nations, putting its past to history and investing in peace.” “Human dignity is given by God and no amount of violence can negate people’s aspiration for human dignity,” the bishops stressed, adding history has proved that this can be achieved by peaceful means.  “Peace is still possible. Peace is the way” they added.

The United Nations on Wednesday warned that the situation has grown critical in Kayah.  Militias of the People’s Defence Forces have clashed with Myanmar’s well-equipped army, which has responded with artillery and airstrikes, triggering an exodus of civilians into nearby forests.

Thomas Andrews, U.N. special rapporteur on human rights in Myanmar warned that the state could suffer a “massive” loss of life beyond anything seen since the military seized power, with more than 100,000 people fleeing their homes to escape the conflict.

“The junta’s brutal, indiscriminate attacks are threatening the lives of many thousands of men, women and children in Kayah State,” Andrews, said in a statement. “Let me blunt. Mass deaths from starvation, disease, and exposure, on a scale we have not yet seen since the February 1 coup, could occur in Kayah State absent immediate action,” he warned.

Father Celso Ba Shwe, the apostolic administrator of Loikaw Diocese said that as fighting escalates in Kayah and in the neighbouring state of Shan, churches, convents and monasteries have opened their doors to fleeing civilians, regardless of religion and ethnicity, especially the elderly, children, women, the sick and the disabled.

As of June 7, he said, 23 camps for internally displaced persons have been set up and about 45,000 displaced persons are under the care of the Catholic Church of Loikaw. But after the attacks on churches, they are scattered again.

He appealed to both sides of the conflict in Kayah to refrain from targeting places of worship.

With food, goods and gasoline prevented from reaching Kayah, Father Shwe warned of an “imminent famine”.

A source in Pekhon Diocese, in neighbouring Shan state, told the Vatican’s Fides news agency that the military has destroyed tons of rice stored to feed the internally displaced people in the village of Loi Ying Taungche, near the city of Moebye.

The source noted that army is following the “policy of the four cuts”: cutting off all access to food, communications, transport and finances, to squash every resistance and protest.

According to the office of the UN High Commissioner for Refugees, more than 175.000 people have been displaced in Kachin, Karen, Chin, Kayah and Shan states since the Feb. 1 coup.

Share on FacebookShare on TwitterShare on PinterestShare on EmailShare on LinkedIn
Wisconsin Supreme Court strikes down COVID school closuresPope at Angelus: Discover the presence of God in our lives