As a lifelong educator and student of American educational history, I was intrigued by the announcement that Pete Hegseth of Fox fame (along with David Goodwin) had penned Battle for the American Mind: Uprooting a Century of Miseducation. Even more intriguing was the fact that it made the Number One spot on the New York Times Best-Seller List in June and remains on the list as of this writing. Its popularity is a testimony to the importance Americans attach to schooling, but even more so, to the current intense dissatisfaction with the government (aka, “public”) schools. But a few pages into the work, my enthusiasm dampened and morphed into general disappointment.1 However, let me highlight the good material before launching into a negative slide. 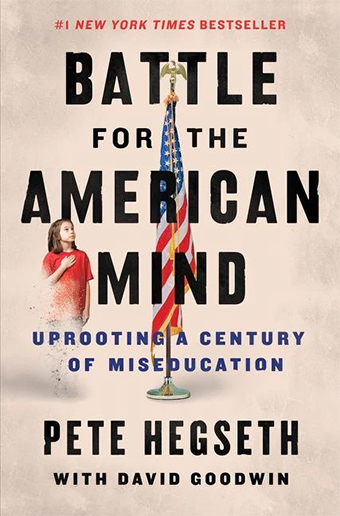 The first shock is the statistic that the average American child, from kindergarten through twelfth grade, will have spent 16,000 hours in a classroom. That’s a lot of time – and a lot of undiluted teacher influence – probably more than most parents have with their children at home – a point to which we shall return. Hegseth correctly cites the COVID experience as an inflection point as heretofore uninvolved parents got “woke” to the ideology being spoon-fed to their children (e.g., the 1619 Project), let alone the immorality. While we have known about the toxic nature of much university education for a long time (regrettably, including most of Catholic higher education), many were ignorant of the problem at the elementary and secondary levels – but those are the “feeders” for the universities and colleges. Cardinal Newman, having failed with his university project, concentrated his efforts at the two lower levels with his founding of The Oratory School.

Hegseth sees the whole scenario as so irreparable that he believes the only solution is to close down the governmental educational monopoly. To be sure, teachers are not mere robot-like conveyors of “information” (although information is essential), however, we must be on guard lest “formation” devolve into “indoctrination”), as it surely has in the vast majority of American government schools. Hence, a long-held conviction of mine that the government has no place in education. That notion, however, is not a brand-new insight of mine or Hegseth; it has an impressive pedigree, from John Stuart Mill in On Liberty (1898), to Milton Friedman in Capitalism and Freedom (1972). The starkest expression of this understanding comes from Samuel Blumenfeld in Is Public Education Necessary? (1981): “. . . In a free society government has no more place in education than it has in religion.” Expressing thoughts like this forty years ago was tantamount to blasphemy; it is now conversation du jour.

The tenth chapter (“How Classical Christian Education Works”) is arguably the best of the book. The discussion on human nature – and its God-ordained immutability – is spot-on. Hegseth observes that the task of an educator is to teach a child how to think, not what to think. Further, that youth today are “distressed and fearful, and often aimless.” How could it be otherwise when they have no grounding or rootedness? He takes direct aim at the “compartmentalization” or “specialization” of the educational scene, resulting in a lack of integration and tunnel vision, with students unable to see the forest for the trees. Of course, the problem is that most teacher education programs are weak and “woke,” producing weak and woke teachers.2

Astutely, Hegseth drills down on bad textbooks;3 going even farther, he argues against textbooks in favor of exposing students to texts, that is, original sources. He also calls for restoring memorization to a place of honor in curricula, as well as Latin. He underscores the fundamental weakness and inadequacy of charter schools, namely, that they cannot truly go “ad fontes,” to the real sources of knowledge found in the Judaeo-Christian Tradition; after all, they are “public” schools, from which “God-talk” is banished (unless it’s negative God-talk).

Tackling the viewpoint that exposure to good out-of-school religious education programs and weekly church services can counter the negative influence of the “public” school, he asserts – confidently and accurately: “A few hours a week in church – Sunday school and Wednesday nights – don’t stand a chance against more than forty hours a week in progressive schools.” That message needs to be internalized by many priests and bishops who still, naively and even obstinately against all the data, believe that “good” CCD can not only teach religion as effectively as a Catholic school but can also effectively serve as an antidote to the poison of the government schools. Even more sadly, not a few clerics are not even aware of the damage being wrought in the so-called “public” schools.

What is the primary obstacle to educational reform? Hegseth hits the bull’s eye: It is the teacher union lobby. And what is the solution to effect reform? Just as sharply, he identifies school choice. He ends with an appeal to parents and grandparents to do everything in their power to extricate their youngsters from the grip of an educational system only capable of producing what Thomas Merton in his Seven Storey Mountain termed “a generation of hyenas.”

Now, to the task of pointing out the many inadequacies of the work – which it pains me to do because I believe Hegseth and his co-author were motivated by nothing but the highest intentions.

The first glaring lacuna is the failure to discuss Catholic schools in America. Indeed, it is not possible to talk about American education, absent reference to Catholic schools. In point of fact, the first school in what is now the United States was founded by Franciscan friars at St. Augustine in Florida in 1606. To the present day, American Catholic schools represent the largest non-governmental school system in the world. The word “Catholic” does not even appear in the Index and, according to my count, the word itself appears only three times in the entire book.4 Hegseth is a “born-again” Christian (having lived a rather immoral life for a long time), and that brand of Christianity has a hard time acknowledging anything good coming from the Catholic Church (and is also way too “preachy”). Thus, as he demonstrates the centrality of Christianity for western education, one would never know from his telling that it was monasticism that produced the first schools, followed by cathedral schools, which eventually gave birth to the universities. In other words, western education is inseparable from Catholicism.5

Secondly, the text is clearly the work of two hands, discernible in style and vocabulary,6 about which more momentarily.

The word “paideia” is used dozens, probably hundreds of times, throughout the book, but it is never really defined. It is a mode of education and, in modern times, was popularized by Mortimer Adler of the University of Chicago with his “Paideia Proposal,” eventually enunciated in a body of principles, which surely should have been quoted.7 Hegseth notes that Adler, a secularist for most of his life, eventually became “a Christian.” In point of fact, he became a Catholic Christian – another example of the silencing of the voice of Catholicism so prevalent here. We are told that Western Christian Paideia (WCP) was “created for a self-governing people.” That is false; it was created to make saints for Heaven. Even more stunningly, we are told that WCP “was intentionally developed and cultivated beginning with the Greeks.” How could pagan Greeks make a Christian form of education? The seeds of such an education, absolutely, but not the final product. Again, sloppy scholarship.

The text suffers from tedious and unnecessary repetition as though various chapters were originally individual talks or essays then joined together, without doing the required careful editing.

While the break-up of “the Kingdom of Christ” (or Christendom) and the loss of “Christian art and music in the creative marketplace” are bemoaned, intellectual honesty does not seem to compel the authors to lay those sad developments at the door of the Protestant Reformation.

Several statements are made rather apodictically but are manifestly wrong. Some samples:

“Belief in God’s revelation must precede knowing anything.” From time immemorial, the Church has taught that logoi spermatikoi (seeds of the Word) can be found even among pagans because natural reason (although weakened due to the sin of our first parents) can be a guide to truth; in the modern era, this teaching found magisterial expression with Dei Filius at the First Vatican Council and in St. John Paul II’s encyclical, Fides et Ratio. Revelation and faith complete the search for truth, but unaided human reason can lead to that fulfillment.

“Lies. . . can be virtuous.” Aristotle and Aquinas, call your offices! One can never perform an evil act to bring about a good end; nor can an evil act ever be good, period.

Right and wrong are described as “a divine ideal.” No, right and wrong follow from both the natural law and the Decalogue. “Ideals” are praiseworthy goals but not mandates: To worship God, to honor one’s parents, to refrain from murder and theft are not mere “ideals” or pious suggestions; they are divine commandments.

Most disturbing are the numerous gaffes in sentence structure, basic vocabulary, and grammar. To wit:

• “theologist” presumably for “theologian”;
• the objective case of the personal pronoun “who” (“whom”) is seemingly unknown to the authors as it never makes a debut when it should have on several occasions;
• “first proto-Christian” (“proto” means “first”);
• Poseidon was a Greek god, not a Roman god;
• “Anglos” used for “Angles”;
• “levitates life”: What does that mean?
• “Boy, is this a lesson!” How’s that for professional writing?

These gaffes should not be causes for wonderment because Hegseth admits: “I write like I speak” (“like” should be “as”!). He also acknowledges his very poor academic formation through thirteen years of government schooling, followed by studies (and degrees) from Princeton and Harvard. Yet he notes he has never read Homer, Virgil, Plato, or Aristotle – and knows not a word of Latin or Greek. Further, “I can’t properly diagram a single sentence, and couldn’t tell you the difference between a verb and an adverb.” While the honesty is commendable, one can still marvel at the hubris which would allow someone with such notable deficiencies to author a book on the abysmal state of American education.

To sum up: Good points are made here, but they are clouded over by inexcusable errors. If a second edition of the work is on the horizon, I would suggest having a truly competent educator go over the entire book with a fine tooth comb – or else, just extract the tenth chapter and publish it as a worthwhile pamphlet.

My overall reaction? As I said at the outset, general disappointment. Or, as Our Lord cited the proverb, “Physician, heal thyself.”

Battle for the American Mind: Uprooting a Century of Miseducation
By Pete Hegseth and David Goodwin
Broadside Books/HarperCollins, 2022
288 pages