EWTN and the Three Secrets of Fatima

A transcript from this video follows:

The views and expressions from videos and news brought to you by YouTube and other Catholic sources are not necessarily the views of CatholicMasses.org. We are bringing you Catholic news and videos per our mission statement and dedication to our faith.

Please support our community by viewing Mass and sharing this convienence with your friends and family. Although this may not be Mass at your local parish, you may use our custom content to search for your local parish, follow the link to their website and see if there is a streaming Mass available locally. If they do have one please let us know. Thank you for your faith and trust in us and God bless you.

You may like to read todays scripture while you enjoy mass.

Prayer and Act for Spiritual Communion

My Jesus, I believe that You are present
In the Most Holy Sacrament.
I love You above all things,
and desire to receive you into my soul.
Since I cannot at this moment receive You sacramentally,
come at least spiritually into my heart.
I embrace You as if You were already there and unite myself wholly to You.
Never permit me to be separated from You.

Please use our search feature to find a Catholic church near you to find local Mass times.
Monday of the Twenty-sixth Sunday in Ordinary Time - September 28, 2020

One day, when the angels of God came to present themselves before the LORD,
Satan also came among them.
And the LORD said to Satan, “Whence do you come?”
Then Satan answered the LORD and said,
“From roaming the earth and patrolling it.”
And the LORD said to Satan, “Have you noticed my servant Job,
and that there is no one on earth like him,
blameless and upright, fearing God and avoiding evil?”
But Satan answered the LORD and said,
“Is it for nothing that Job is God-fearing?
Have you not surrounded him and his family
and all that he has with your protection?
You have blessed the work of his hands,
and his livestock are spread over the land.
But now put forth your hand and touch anything that he has,
and surely he will blaspheme you to your face.”
And the LORD said to Satan,
“Behold, all that he has is in your power;
only do not lay a hand upon his person.”
So Satan went forth from the presence of the LORD.

“Naked I came forth from my mother’s womb,
and naked shall I go back again.
The LORD gave and the LORD has taken away;
blessed be the name of the LORD!”

In all this Job did not sin,
nor did he say anything disrespectful of God.

An argument arose among the disciples
about which of them was the greatest.
Jesus realized the intention of their hearts and took a child
and placed it by his side and said to them,
“Whoever receives this child in my name receives me,
and whoever receives me receives the one who sent me.
For the one who is least among all of you
is the one who is the greatest.”Then John said in reply,
“Master, we saw someone casting out demons in your name
and we tried to prevent him
because he does not follow in our company.”
Jesus said to him,
“Do not prevent him, for whoever is not against you is for you.” 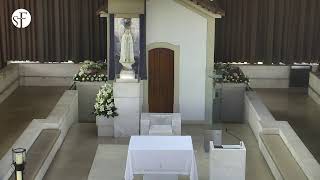 EWTN’s series on the secrets of Fatima
Fatima
13 views