Making a Marian pilgrimage to the Salus Populi Romani 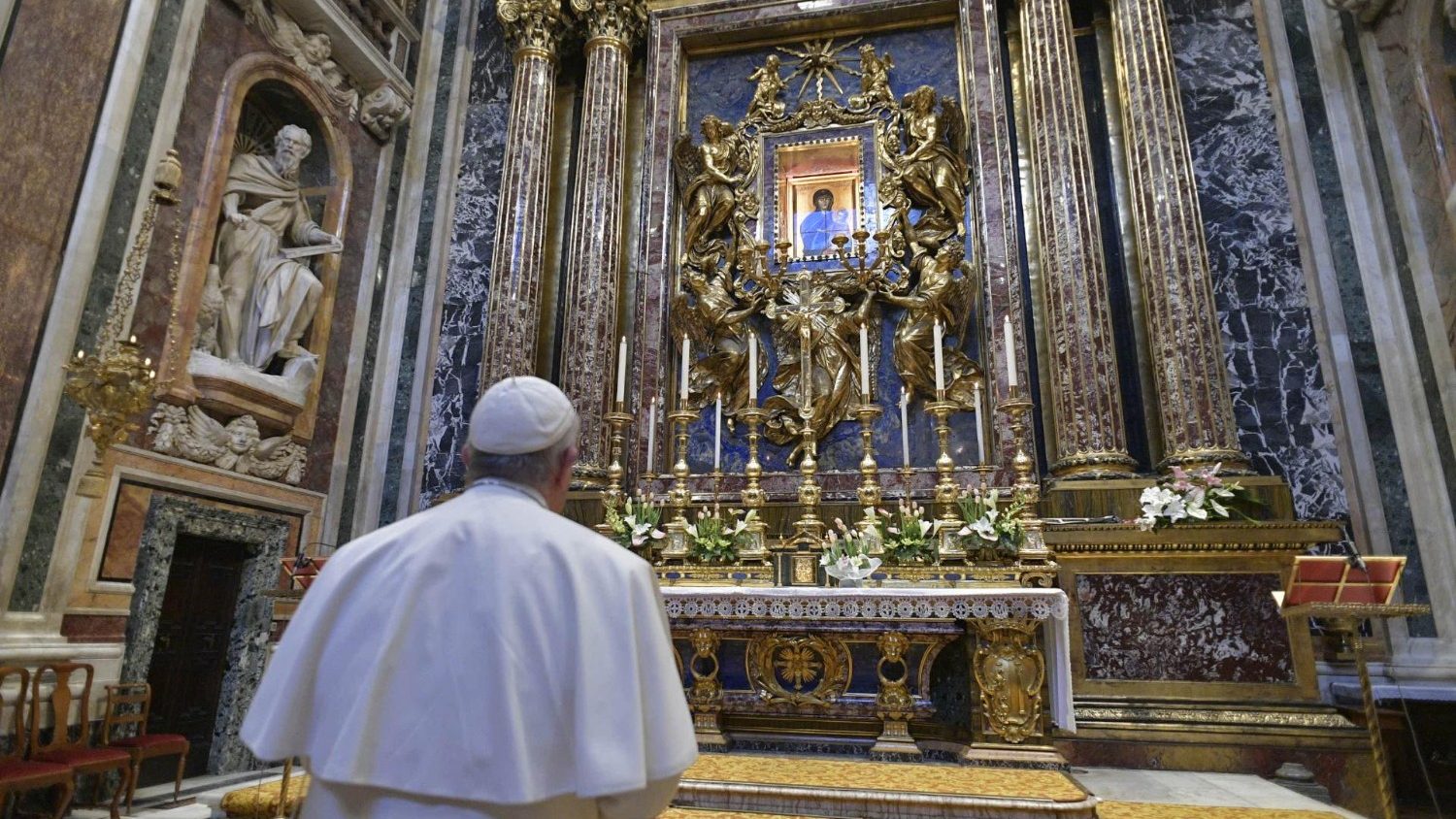 Just a year ago on the Solemnity of the Assumption of the Blessed Virgin Mary, Pope Francis encouraged pilgrims gathered in Saint Peter’s Square for the Angelus prayer to consider visiting a Marian shrine as a beautiful gesture to venerate the Madonna. In particular, he said both those visiting and living in Rome could go to the Basilica of Saint Mary Major to pray before the icon of Our Lady that is called Salus Populi Romani (Protectress of the Roman People).

Monsignor John Abruzzese is a canon at the Papal Basilica of Saint Mary Major and helps administer the Basilica, the liturgies, and functions. He spoke to Vatican News’ Thaddeus Jones about the icon.

Could you give us some background on the Salus Populi Romani icon and the chapel where it is found?

“This is the Pauline Chapel built by Paul V, the Borghese Pope, and it houses the icon of Our Lady that is called Salus Populi Romani. The first time that it’s mentioned is in 590 when Gregory the Great was Pope. He carried it in procession to avert a plague that was besieging the city at the time, and it’s been here ever since. When it first came, it was placed over the baptistery. Then it was placed in the main part of the church. Then in 1600 Paul V built a special chapel that is attested to on the outside that he took it from the main position in the church and placed it in its own special chapel.

The icon itself is about four or five feet high by about 3 feet, even more. What’s interesting is that it is an old-style, Byzantine Madonna. In the 10th century the Madonna was always pointing to Jesus. In this particular one, she’s holding Jesus very close to her. Also, the fact that instead of the child looking out to the people, the child looks to his mother and it’s the Madonna that looks to the people. She carries a little swath of cloth that it is called a mappa or mappula, which is a consular symbol indicating that she is Queen of Heaven. The letters on the icon are an indication that she is the Mother of God, Mater Theou in Greek. There was probably some writing, identifying the child too, but it seems to have been covered over the centuries as a result of the various re-paintings.

Pope Francis on the Solemnity of the Assumption last year encouraged people to come visit the icon here and to pray before it. Why do you think that’s important for him?

Because the Jesuits are very much linked to this particular image of Our Lady. It was in 1569 that Pius V gave permission to the third Superior General of the Jesuits, Saint Francis Borgia to reproduce the painting. It was forbidden to reproduce this painting in print. And what’s so interesting about it is the Jesuits used it successfully in their missionary work throughout the world. And really when you think of John Paul II in Mexico, when he proclaimed Our Lady the Star of Evangelization, obviously before that in this icon she was converting people all over the world to Christianity. What’s interesting too is that with the invention of the printing, press, the Protestants concentrated on the Word, but the Catholic Church concentrated on the image. So, they produced many images of Salus Populi Romani, and they were propagated throughout the world with the good result that there were many conversions to the faith. And you see, throughout the world, the image of Our Lady in various forms and in various countries, especially in Asia and Japan in particular. Francis Xavier brought this image to Japan. He brought it to India. It’s just been phenomenal how from that time it has been diffused throughout the world.

Would you say in today’s Covid era this icon could have a special role?

Are there any ancient traditions tied to the icon you might wish to highlight?

In the Middle Ages, there was a really wonderful tradition where on the Feast of the 15th, the Assumption of Our Lady, the icon was carried in procession in various places throughout the city. That has been disregarded at least from what I’ve seen in recent history. However, in medieval times the icon of Christ that is at John Lateran was brought down and met with the icon of Our Lady to symbolize the encounter between Jesus and Mary at her death, a symbolic and very significant moment, and tragically we don’t do the same symbolic gestures anymore. That certainly was (the tradition) at the time and in subsequent ages – we’re talking about 1100 – when they started the tradition. As much as I have tried, I have been unable to find out when they stopped it, but it was a good tradition.

Share on FacebookShare on TwitterShare on PinterestShare on EmailShare on LinkedIn
First the diagnosis, then the cureBarnabite missionary appeal: "Pray, pray, pray for Afghanistan"