Home Test page Learning and loving the music of Christendom

Learning and loving the music of Christendom

The history of Western art, music, and literature is intimately intertwined with the Catholic Faith and the Catholic Church. Between Catholic patrons supporting the arts, and Catholic artists putting their faith on canvas or plaster or carved out of marble, Catholicism has had an enormous influence on the development of Western art. 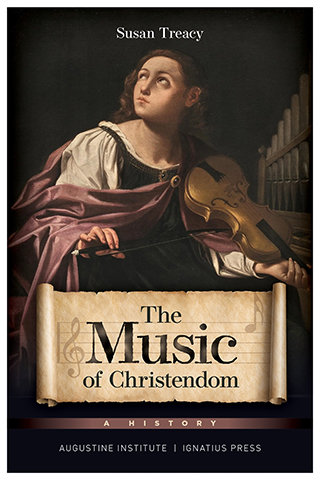 Dr. Susan Treacy’s new book, The Music of Christendom: A History (Augustine Institute/Ignatius Press, 2021), delves into the history of so-called “classical” music (not to be confused with the stylistic period—Mozart, Haydn, and the like—known as “classic”), in a wonderful survey that is approachable and accessible for a wide range of readers. No musicology degree is necessary; frankly, no prior musical expertise of any kind is necessary. The book takes the reader through the development of western music, from the Greeks’ discovery of ratios in relation to relative pitch, up through the present day.

The reader will see how the history of Western music, for many centuries, was essentially centered around sacred and liturgical music, but this was by no means the only music being written, even in the high Middle Ages. But one cannot ignore the enormous influence of Catholicism on the development of musical forms and styles.

Dr. Treacy recently spoke with Catholic World Report about her new book, reflecting how important it is for Catholics to have a working knowledge of classical music.

Catholic World Report: What prompted you to write the book?

Susan Treacy: Having taught music history to college music majors for many years, I became keenly aware of the Catholic roots of Western culture and, thus how important is the Catholic Church to Western classical music.  Twenty-seven of those years were spent at Catholic universities (Franciscan University of Steubenville and Ave Maria University), so I became more and more aware of Catholic culture and of just how important music is not only to the faith, but also to other areas of society, e.g., politics, visual art.  The courses I taught and the textbooks I used routinely pointed out the implicit Catholic roots of Western classical music. The more immediate reason for my writing this book was an invitation I received from Joseph Pearce to write such a book.

CWR: Of course, the history of Western classical music is not simply a list of Catholic composers; it includes non-Catholics, non-Christians, non-believers. So, what is it about music? Why should Catholics care?

This intensifies throughout the centuries, and the music history student will notice that gradually, as the course syllabus moves forward chronologically, the class begins to study more secular music and less sacred music.  Nevertheless, the secular music and the Protestant sacred music both have their roots in Catholic civilization.  Gregorian chant, animated by the beauty of Christ, whom it praises, is the foundation of all Western music, Christian or not.  It behooves us, therefore, to immerse ourselves in music of the Western classical tradition, which is so imbued with the beauty of Christ.  This is our music!

CWR: Are there aspects of the history of classical music that you think every Catholic should know about?

Treacy: Yes! Certainly, Catholics should become familiar with what we know about the origins of Gregorian chant and how it was disseminated throughout Europe.  Also, sacred polyphony of the Renaissance is a must for Catholics—Josquin Des Prez, Giovanni Pierluigi da Palestrina, Tomás Luis de Victoria, William Byrd, and many, many other composers of the sixteenth and early seventeenth century.  Their music is truly heavenly and all of them interacted with historical events of their time—Palestrina with the Council of Trent, Victoria with Counter-Reformation Rome but also with the Spain of the Philip II, and Byrd with the court of Elizabeth I and the dangerous lives of Catholics in Elizabethan and Jacobean England.

There’s so much that’s interesting, like, for instance the rise of instrumental, starting in the Renaissance and flowering in the Baroque era, with its full development in the eighteenth and nineteenth centuries.  These are just a few aspects of a rich and exciting history.

CWR: For many centuries, the major threads in western music were sacred music—the monumental influence of Guillaume de Machaut, Giovanni Pierluigi da Palestrina, JS Bach, and so forth.  Even later composers who were not primarily sacred music composers were believers, and even those who weren’t still leave an impressive oeuvre of sacred music. Why does sacred music continue to be such an important thread in the history of western music?

Treacy: That’s a really good question.  Gabriel Fauré was not a serious Catholic and yet his Requiem is one of the great masterworks, beloved by people of all faiths—and of none.

Ralph Vaughan Williams, although the son of an Anglican clergyman, was at best an agnostic and yet he composed some of the greatest modern hymn tunes, along with sacred works like his Mass in G Minor.

Likewise, Benjamin Britten was not an avid practitioner of the Anglican faith, yet his sacred music, for example his Festival Te Deum, are full of the splendor and glory of the Lord. As long as there are Christians there will be a demand for sacred music, but even non-believers can sense the beauty and transcendence of sacred music, and sometimes they might even be converted by it.

CWR: I was glad to see many of my favorite composers discussed—many of whom I think are underrated and under-known by the average listener (Ralph Vaughan Williams, Henryk Górecki, Arvo Pärt, Anton Bruckner, Sergei Rachmaninoff, and others). Are there other composers, or trends, that you wanted to include but ultimately couldn’t?

Treacy: Richard Strauss was one composer I hated to omit, so instead I included one work of his—the tone poem Don Juan—in the “starter list” of 100 Essential Masterworks.  I was also sorry that I could not include the Scandinavian composers, especially Jean Sibelius and Carl Nielsen.  I would love to have been able to introduce instrumental dance music of the Renaissance.

CWR: So much music in the 20th century and since has consciously fought against beauty, for various reasons. But there are still many composers creating beautiful, moving, tonal music. Why can’t we escape beauty in music?

Treacy: My belief is that, knowingly or unknowingly, composers are drawn to God, who is beauty in himself.  I did not include in the book a discussion of Arnold Schoenberg and the dissolution of tonality precisely because atonal and twelve-tone music is not beautiful, although it is interesting from an intellectual point of view and it’s fun to analyze.  There are not a few composers who started out trying to compose like Schoenberg or his student Webern, but later returned to tonality.  Some examples are Arvo Pärt, Michael Kurek, Frank La Rocca, and William Bolcom.

CWR: The book ends with a “starter list” of 100 essential masterworks of classical music. How on earth did you narrow the list down to these hundred?

Treacy: Believe me; it was not easy!  I was asked to focus on the works discussed in the book, so that helped me to limit the list, but I also included a few composers and works that were not mentioned.

CWR: Is there anything else you’d like to add?

Treacy: I encourage readers to listen to lots of classical music.  Don’t worry if you think you don’t understand it.  You don’t need to; just enjoy!

YouTube is a huge source of recordings of sacred and secular classical music of all periods, including multiple performances of the same work.  Some videos allow you to follow the score as you listen, while some allow you to watch the musicians as they perform.  There are all levels of performances, from music videotaped in someone’s living room to performances by the greatest musicians in the greatest performing halls in the world.  There are also many videos of Catholic liturgy which include great sacred music from the Church’s treasury.

For many years I have subscribed to the BBC Music Magazine, which has very interesting articles about music, composers, performers and other aspects of classical music, including CD reviews.  Each month it comes with a CD, which features wonderful recordings from the BBC’s vast library of recorded performances.  I love this magazine and I think it’s an excellent and fun way to increase one’s knowledge of classical music.

Share on FacebookShare on TwitterShare on PinterestShare on EmailShare on LinkedIn
No reluctant prophetFormer hostage, Father Maccalli: Pray for captives held in the Sahel.