Editor’s note: This review was originally posted on November 11, 2019.

“In vino veritas,” Doc Holliday reminds an enemy in a gambling saloon in the 1993 film Tombstone, thereby insinuating that his own insulting behavior toward the outlaw is not mere drunkenness but instead reflects Holliday’s real sentiments. “Age quod agis,” retorts the other man darkly. The two continue their brief but very hostile exchange of schoolboy phrases until an anxious saloonkeeper tells them to break it up: “C’mon, boys, we don’t want any trouble here—not in any language.” 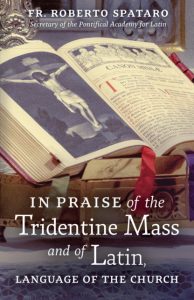 Amusing Hollywood fiction or no, the scene reminds us of a very different era, when even gunfighters such as Holliday received an intensive classical education. And just to be clear, “classical education” did not mean Great Books programs or a curriculum saturated with Greco-Roman mythology, but subjects such as trigonometry, logic, rhetoric, and of course Latin.

Along with the Tridentine Mass, which employs it, this last subject is the focus of Fr. Roberto Spataro’s new book In Praise of the Tridentine Mass and of Latin, Language of the Church. Even the very title is fraught with meaning, it seems to me, through its dual emphasis. If we seek a restoration, it is necessary to promote a renewed appreciation of the ancient liturgy and a revival of Latin-centered education.

Certainly those who look up to Cardinal Raymond Burke as a bulwark against reckless Amazonian theology should take to heart the remarks of His Excellency’s uncompromising introductory foreword:

Because of the general indifference towards the teaching of Latin, especially in the seminaries, the Church has reached a state in which many of her pastors no longer know her universal language. If it is absurd to think that seminarians may seriously study theology, the sacred liturgy, and canon law without being able to read the primary texts written in Latin, it is even more absurd that priests destined for higher studies of the sacred sciences find themselves without this capacity.

What Catholic “conservatives” might take away from this is that whenever they too exhibit “indifference toward the teaching of Latin,” they contribute to the environment which fosters the very looniness they themselves bemoan. If we shrug as a Catholic prep school drops Virgil, we really have no business complaining when our universities host The Vagina Monologues.

As a matter of fact, some Protestant schools have picked up the slack, with a case in point being Hillsdale College. Hillsdale has demonstrated its earnest commitment to reviving its once-defunct classics department by enlisting Patrick Owens, one of the world’s foremost practitioners of “living Latin” pedagog, and Owens’ introduction alone justifies the purchase price of this book, as it offers the reader a smooth, clear, and good-humored history of Latin education from someone who obviously knows his subject inside and out.

In particular Professor Owens drives home the fact that Latin is not just about men in togas nor even the medievals, but is rather part of the very foundations of modernity:

After the watershed moment for vernacular literature at the start of the fourteenth century when Dante composed his Divine Comedy, scholars and artists of every stripe like Petrarch, Kepler, Galileo, Newton, Leibniz, and even Nietzsche continued to write principal works in Latin. The use of Latin was so common up through the nineteenth century as to be taken for granted throughout Europe and its colonies. Until that time, there was no interval of time when Latin was not spoken in universities and throughout the Church. For most of the modern period, a graduate student in any field would have been embarrassed to submit a dissertation that was not in Latin.

For his part, Professor Owens emphasizes that Catholics seeking an explanation for how and why we have moved so far away from this state of affairs should resist the temptation to hastily scapegoat the councilors of Vatican II, as the rise of the modern, centralized nation-state played a role by displacing Latin in favor of national languages. A vicious cycle ensued, for as fewer teachers were able to teach Latin well, fewer teachers were able to, well, teach Latin well.

In the main body of the text Fr. Spataro looks to the more distant past, to the time when Latin first set aside its limited role as the tongue of a particular people and assumed its lofty role as an international bond:

I would like to recall that, after the fall of the Western Roman Empire, accompanied in the fifth century by the influx of new peoples, the Latin language became immortal, destined never again tot die. Beginning in the fifth century, civil and political communities selected Latin for their daily conversations, to be the basis of relationships, for drawing up administrative acts, for composing literary works, and for the celebration of prayers. In this way the peoples of Europe, in dialogue with one another through the use of the same language, developed a unique spirit of their own.

It seems to me that at least some of the rancorous controversies about “Western civilization” might be resolved by toning down triumphalist phrases about Western democracy or science and instead matter-of-factly defining “the West” as that cluster of cultures networked together through Latin fluency. (This would of course raise the question of how much of the West really still exists today, but such a question might indeed be well worth asking.)

In any event, the “unique spirit” to which Fr. Spataro refers was hardly confined to Europe. For instance, other scholars have already demonstrated the debt the American colonies owed to the classical inheritance, whether all the colonists themselves were willing to acknowledge said debt or not.

And, of course, there is the religious dimension. As Professor Owens plainly puts it, Latin is essential to who we are, as Catholic Christians:

Languages are intrinsically bound to cultures, and Latin for nearly two-thousand years had been the language not only of Catholic culture in the West but of Western culture itself. It is for this reason that the Church took pains to keep alive the tradition of active Latin. Catholic intellectuals knew well that since Latin was the vehicle of culture, a superficial familiarity would not be sufficient. To ensure the ability to engage with past sources and contemporary intellectuals as well as to protect the transference of Catholic culture to subsequent generations, active language use is essential.

For those seeking an authentically Christian and wholesomely cosmopolitan alternative to liberal globalism, the revival of Latin is critical. In contrast to American “Coca-Colonialism,” classical culture allows for the diversity of provincial and national cultures even as it links such cultures into a larger metaculture. Unlike Disney, Marvel, and garish pop musicians, long-dead Romans do not threaten to supplant all local identity and history, much less the Faith.

Just as the Eucharist is the heart of the Church, so the Latin Mass must be at the heart of any discussion of the role of Latin in Christian life. When Fr. Spataro calls “for a correction, a reorientation ad Deum,” he means it quite literally. The theocentric counter-revolution, he explains, began with Benedict XVII’s Motu Proprio:

We would be mistaken to consider [the Motu Proprio] merely as an act of generosity by the Supreme Pontiff to meet the spiritual needs of a minority group of priests and faithful. On the contrary, it is an invitation to the whole Church. Knowledge, diffusion, and practice of the Holy Mass and the other sacraments in the extraordinary form is a great opportunity to restore spiritual profundity to Catholicism. This is the true pastoral priority, over and above transient circumstances.

The point here is neither to stamp out the Novus Ordo nor to disparage the priests who reverently serve it or the many Catholics who faithfully attend it, but to recognize that in a world of frenzied continual change we could use some more spiritual anchors, which could well come in the form of more Latin masses.

Our Latin-educated Catholic forebears were not perfect, but we surely do have some things to learn from them, too, even from dangerous and violent men like Doc Holliday. As a postscript it is interesting to note that Holliday’s devout cousin Mattie, a Sister of Mercy, had urged him to think of his soul as he lay dying of tuberculosis; he followed her advice and was received into the Church shortly before his passing. If the past was an era when students had to sweat over “dead” languages, it was also a time when a nun might persuade a deadly gunfighter to accept the water of baptism.

In Praise of the Tridentine Mass and of Latin, Language of the Church
By Fr. Roberto Spataro
Translated by Zachary Thomas
Foreword by Raymond Cardinal Burke
Introduction by Patrick M. Owens
Angelico Press, 2019
Paperback, 123 pages