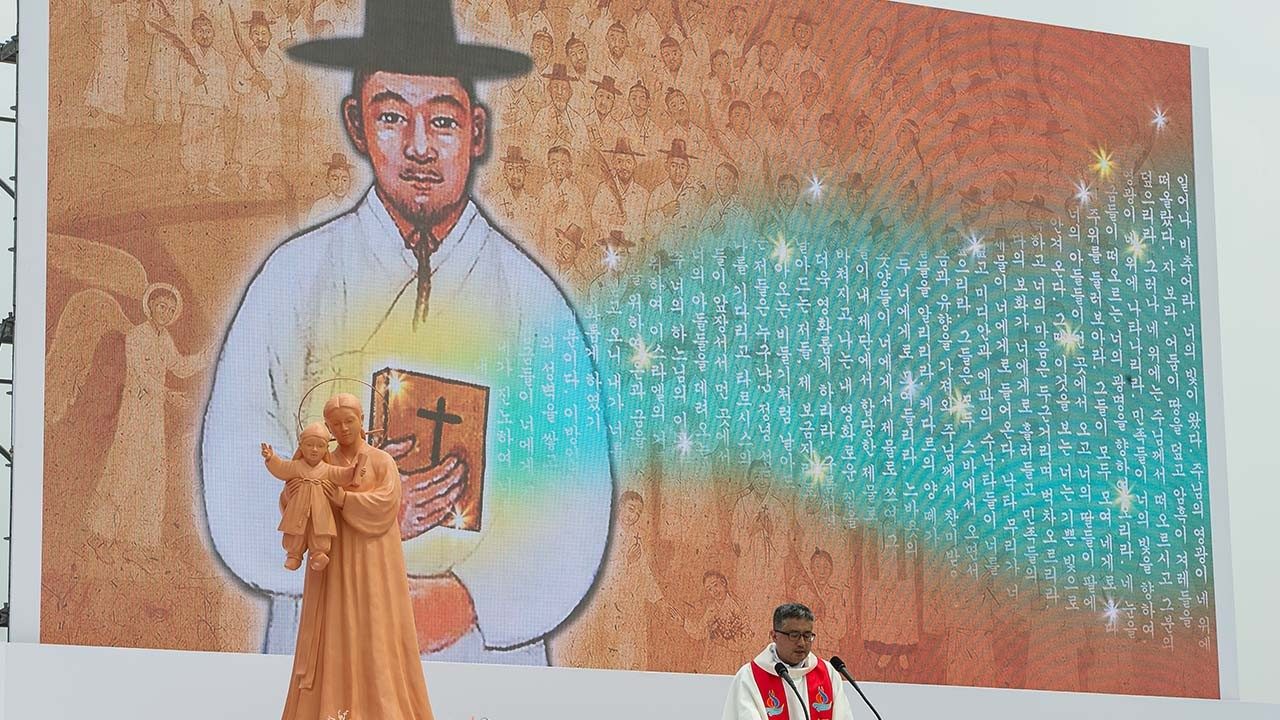 Korean Catholics in the diaspora around the globe joined spiritually with their compatriots on Saturday to celebrate the 200th anniversary of the birth of Korea’s first native-born priest.

One such celebration took place in St. Peter’s Basilica, as the new Prefect of the Congregation for the Clergy celebrated Mass for Koreans in Rome.

Life of a Korean martyr

In his homily, Archbishop Lazarus You Heung-sik recalled the life and Christian witness of St. Andrew Kim Taegon.

The Saint was born on 21 August 1821 in Solmou, Dangjin, and was handpicked by a French missionary to study for the priesthood.

After studying in Portuguese-administered Macau, St. Andrew Kim was ordained a priest, the first native-born Korean to receive the Sacrament of Holy Orders.

He returned to Korea to carry out his pastoral activity, but was arrested and martyred after less than a year, on 16 September 1846.

Archbishop You Heung-sik recalled Pope Francis’ 2014 visit to South Korea to mark the 6th Asian Youth Day, where he met young people at the Shrine of Solmou and Haemi.

The Archbishop, who was serving as the Bishop of Daejeon during the visit, praised Korean Catholics’ response to the Holy Father’s invitation to live as examples of Christian love.

“St. Andrew Kim, and others of our forefathers, practiced what they believed,” said the Archbishop, “even if they lived in a society dominated by a hierarchical social system, and did their best to live the Gospel ideals of human dignity and equality among peoples.”

He added that, even in his brief life of 25 years, St. Andrew Kim gave faithful witness to the Gospel equality that Jesus embodied.

The Prefect of the Congregation for the Clergy also recalled UNESCO’s recognition of the celebrations surrounding St. Andrew Kim and the great human and cultural heritage he left behind.

The Church in Korea is also celebrating the 2021 bicentenary as a Jubilee Year.

Yet, lamented the Korean Archbishop, the Covid-19 pandemic has continued to lash the world with continuous waves of suffering.

“It seems Providential to me,” he said, “that the bicentenary of Andrew Kim’s birth is celebrated right in the middle of the pandemic—which unfortunately seems to have accentuated our tendency to selfishness and discrimination within society—so that the example of our Martyr might teach us the path with which we can deal with the current crisis.”

Archbishop You Heung-sik noted that the Bishops of Korea have sought to help by launching a project to assist poor people in receiving Covid-19 vaccines.

In footsteps of St. Andrew Kim

The Archbishop then expressed his hope that the Pope might someday be able to visit North Korea, a visit he said would represent a major step forward in peace on the Korean peninsula.

Archbishop You Heung-sik concluded his homily encouraging all Koreans to walk in the footsteps of St. Andrew Kim Taegon and to pursue the path of peace and reconciliation between North and South Korea.

Share on FacebookShare on TwitterShare on PinterestShare on EmailShare on LinkedIn
Pope St. John Paul II’s Timely Wisdom: ‘We Are in the Forefront Today of a Lively Battle for the Dignity of Man’Pope holds Korean saint as model of faith and evangelization