Ken Starr’s new book Religious Liberty in Crisis: Exercising Your Faith in an Age of Uncertainty (Encounter Books, 2021), is a very sound, popular treatment of the constitutional issues surrounding the free-exercise and no-establishment provisions of the First Amendment. Starr’s long career in the law has placed him right at the center of some of the major religious-liberty cases decided by the U.S. Supreme Court, and he writes with insight about this tangled area. Nevertheless, Starr’s treatment of Justice Antonin Scalia’s controversial free-exercise opinion in Employment Division v. Smith from 1992 reflects a widespread conservative hostility to the case. (Indeed, Starr calls it an “anti-liberty decision.”) He predicts that it is “highly likely” that the Court will jettison Smith in the major free-exercise case currently pending at the Court, namely, Fulton v. City of Philadelphia. 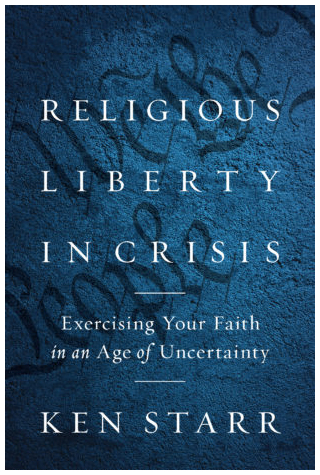 This hostility to Smith from conservatives is unwarranted, and its reversal would be a great mistake. In fact, Smith embodies the doctrine of judicial restraint that, in the long run, benefits religious freedom in our democratic order.

Smith involved two individuals who were fired from their jobs as drug-and-alcohol-abuse counselors because they used peyote for sacramental purposes at religious ceremonies. They were denied unemployment benefits by Oregon due to misconduct, and they then brought an action seeking a conduct exemption for the state’s general prohibition on the use of peyote. The Court, with Scalia writing for the majority, rejected the claim for an exemption. It ruled that a neutral law of general applicability did not entitle those seeking an exemption for religious reasons to judicial relief. These sorts of exemptions could be granted by legislatures only and not courts.

Importantly, Scalia argued that this rule, far from being novel, stretched back to the anti-polygamy case of Reynolds v. United States (1878) and continued through the flag-salute case of Minersville v. Gobitis (1940). (The latter case was famously overruled in West Virginia v. Barnette in 1943, but that reversal was predicated on free speech and not its free-exercise analysis to which Scalia adverted.) Moreover, Scalia radically marginalized two more recent precedents that had established that (1) a state had to have a compelling interest to support its otherwise neutral and generally applicable law, and (2) the Court had the power to grant conduct exemptions.

The first of these cases, Sherbert v. Verner (1963), was a classic product of the Warren Court; in fact, the opinion was written by Justice William Brennan, Jr., the remarkably influential driving force of that era’s living-constitutional radicalism. The case involved a Seventh-day Adventist who was denied unemployment benefits following her termination due to her refusal to work on Saturday, which was her sabbath. The Court imposed a compelling-interest requirement on the state and granted Sherbert her conduct exemption. The other case is Wisconsin v. Yoder from 1972, a classic product of Chief Justice Burger’s profoundly muddled thinking. In this case, the Court with Burger’s majority opinion wrote a love letter to the self-reliant Amish and granted their children an exemption from Wisconsin’s compulsory-school law, which was subjected to the compelling-interest requirement found in Sherbert. The problem with both of these cases and their approach is that the Court arrogated to itself the power to determine the outcome of what was fundamentally a legislative balancing process.

Smith supplanted this judicial mischief. What is more, an essential clarification to Smith was provided in 1993 (in Church of Lukumi Babalu Aye v. City of Hialeah), where the Court concluded that if a law is not neutral and in fact targets a religious practice, as happened with an ordinance enacted by the City of Hialeah, then Smith’s rule does not apply and the law must be justified by a state interest that is compelling.

Scalia’s Smith opinion returned the policy questions of religious liberty to the legislative branches, and the legislative response was prompt. In 1993, President Bill Clinton signed the Religious Freedom Restoration Act (RFRA) into law. This statute reestablished the compelling-state-interest standard of Sherbert and Yoder. Starr concludes that, with the enactment of RFRA, “Congress had sent Justice Scalia to the legislative doghouse.” On the contrary, RFRA was predictable in light of Scalia’s confidence in the culture of religious liberty that is fostered by our democratic system (“a society that believes in the negative protection accorded to religious belief can be expected to be solicitous of that value in its legislation . . . . “). Thereafter, RFRA was limited by the Court to apply only to federal law (in City of Boerne v. Flores from 1997), so a number of states adopted their own versions of the statute.

Smith’s fettering of judicial discretion was dramatically undermined during the pandemic. Early on in the crisis, the Court prudently stayed clear of intervening in the imposition of emergency regulations. With the advent of Justice Amy Coney Barrett, however, the Court had a five-member group that blithely tossed restraint aside and plunged in to review free-exercise claims challenging pandemic restrictions on worship. In emergent cases from New York and California, the Court enjoined the enforcement of regulations imposed on religious practices that were entirely consistent with the restrictions on comparable secular institutions. They were, in other words, neutral laws of general applicability.

This intervention by the Court was striking judicial overreaching by all the Court’s most conservative members that would have given Justice Brennan pause. In a February case from California, South Bay United Pentecostal Church v. Newsom, Justice Elana Kagan was the articulate voice of judicial modesty. In dissent, she observed that “it is alarming that the Court second-guesses the judgment of expert officials, and displaces their conclusions with its own . . . . In the worst public health crisis in a century, this foray into armchair epidemiology cannot end well.” Kagan rightly chided the “unelected actors” (that is, judges) who unreasonably insisted “that science-based policy yield to judicial edict.” To return the granting of religiously based conduct exemptions to jurists would, as these pandemic rulings show, result in a recrudescence of the undisciplined judicial discretion of the Sherbert and Yoder era.

This brings us to Fulton. Since 1917, Catholic Social Services (CSS) has been involved in foster care in Philadelphia. For half a century CSS has had a contractual relationship with the city for the care of foster children, of whom there are currently more than 6,000. In addition to CSS, more than thirty foster agencies have contracts with the city to provide foster-care services. Following a newspaper report on the policy of CSS of not placing foster children with same-sex couples, the city terminated its contract with the agency, claiming that CSS’s placement policy violated the nondiscrimination requirement found in the city’s Fair Practices Ordinance.

CSS sought unsuccessfully to enjoin the city’s actions. Both the federal-district court and the U.S. Court of Appeals found that Philadelphia had enacted a neutral law of general applicability in the nondiscrimination provision of its Fair Practices Ordinance, and therefore CSS would not be entitled to a judicially granted exemption because of Smith.

What is behind the resistance of Philadelphia to grant a legislative exemption to CSS in order to continue its well-established work with a large population of vulnerable foster children? The legislative tension here of course is between nondiscrimination rights same-sex couples, on the one hand, and allowing CSS to adhere to its policy, firmly grounded in Catholic doctrine, that children need a mother and father, on the other hand. It is noteworthy that no same-sex couple has even applied to CSS to be foster parents, and all the other agencies in the city will place foster children with them. Both lower courts strongly encouraged the parties to see if some compromise could be reached, but that has not happened.

If the city is using the nondiscrimination policy as nothing more than a cudgel of bigotry to punish CSS for its Catholic view of the family, then that is probably enough for the Court to rule against it in some way. This appears to be Justice Alito’s thinking when he said during the oral argument in Fulton: “If we are really honest about what’s going on here, it’s not about ensuring that same-sex couples in Philadelphia have the opportunity to be foster parents,” said Alito. “It’s the fact that the city can’t stand the message that Catholic Social Services and the archdiocese are sending by continuing to adhere to the old-fashioned view about marriage.” With a majority, that view might give CSS the sort of hollow victory won by baker Jack Phillips in Masterpiece Cakeshop, where the Court returned the case to the Colorado Civil Rights Commission so that body could consider it with the requisite religious neutrality that was missing from its initial review. The decision was not a substantive victory for the free exercise of religion.

In light of Alito’s comments, perhaps Fulton will be seen as a case of Hialeah-type hostility to a specific religious practice. If that is the route the Court takes, then the question of overruling Smith can be avoided. This approach, however, does nothing to help CSS. It simply means that Philadelphia’s Fair Practices Ordinance must be supported by a compelling state interest, and nondiscrimination has always been held by the courts to be a compelling interest. In short, there is really no clear way for CSS to win in this case. Overruling Smith would only add misguided constitutional law to an atrocious political situation.

As a constitutional matter, the free exercise of religion is a complex area that requires the deft accommodation of often sharply divergent interests. There is no perfect solution to resolving these disputes. Whatever course the Court takes—whether granting exemptions itself or leaving that power to legislatures—involves significant trade-offs. With Smith, the trade-offs should be more appealing to conservatives: the balancing of interests is legislative in nature and should thus be done by legislatures and not left to judicial caprice. Further, this understanding reflects a salutary conservative view of the clear limits of judicial power. As Starr says in another context: “The nine justices – or any five-member majority of it – cannot fix every problem.” Conservative friends of religious liberty (and Ken Starr is a great friend of this liberty) should hope for the survival of Smith as the superior rule in this area of constitutional law.