John Hume, who worked to end violence in Northern Ireland, dies at 83 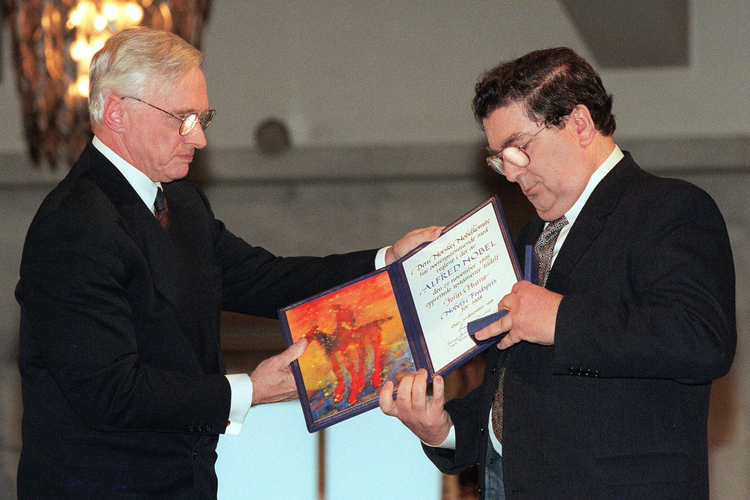 LONDON (AP) — John Hume, the visionary politician who won a Nobel Peace Prize for fashioning the agreement that ended violence in his native Northern Ireland, has died at 83, his family said Monday.

The Catholic leader of the moderate Social Democratic and Labour Party, Hume was seen as the principal architect of Northern Ireland’s 1998 peace agreement. He shared the prize later that year with the Protestant leader of the Ulster Unionist Party, David Trimble, for their efforts to end the sectarian violence that plagued the region for three decades and left more than 3,500 people dead.

“I want to see Ireland as an example to men and women everywhere of what can be achieved by living for ideals, rather than fighting for them, and by viewing each and every person as worthy of respect and honor,” he said in 1998. “I want to see an Ireland of partnership, where we wage war on want and poverty, where we reach out to the marginalized and dispossessed, where we build together a future that can be as great as our dreams allow.”

Born on Jan. 18, 1937, in Northern Ireland’s second city — Londonderry to British Unionists, Derry to Irish nationalists — Hume trained for the priesthood before becoming a fixture on Northern Ireland’s political landscape. An advocate of nonviolence, he fought for equal rights in what was then a Protestant-ruled state, but he condemned the Irish Republican Army because of his certainty that no injustice was worth a human life.

Although he advocated for a united Ireland, Hume believed change could not come to Northern Ireland without the consent of its Protestant majority. He also realized that better relations needed to be forged between Northern Ireland and the Republic of Ireland and between London and Dublin.

He championed the notion of extending self-government to Northern Ireland with power divided among the groups forming it.

“Ireland is not a romantic dream; it is not a flag; it is 4.5 million people divided into two powerful traditions,″ he said. “The solution will be found not on the basis of victory for either, but on the basis of agreement and a partnership between both. The real division of Ireland is not a line drawn on the map, but in the minds and hearts of its people.”

While both Hume and Trimble credited the people of Northern Ireland and the Irish Republic for approving a referendum that led to power sharing, it was Hume’s diplomacy that offered the impetus to the peace process that led to the 1998 Good Friday accord.

Hume won the breakthrough in Belfast’s political landscape in 1993 by courting Gerry Adams, the head of Sinn Fein, the political wing of the Irish Republican Army, in hopes of securing an IRA cease-fire. That dialogue burnished Adams’ international credibility and led to two IRA cease-fires in 1994 and 1997.

Like most Protestant politicians at the time, Trimble had opposed efforts to share power with Catholics as something that would jeopardize Northern Ireland’s union with Britain. He at first refused to speak directly with Adams, insisting that IRA commanders needed to prove they were willing to abandon violence.

He ultimately relented and became pivotal in peacemaking efforts.

Hume had envisioned a broad agenda for the discussions, arguing they must be driven by close cooperation between the British and Irish governments. The process was overseen by neutral figures like U.S. mediator George Mitchell, with the decisions overwhelmingly ratified by public referendums in both parts of Ireland.

“He stood proudly in the tradition that was totally opposed to violence and committed to pursuing his objectives by exclusively peaceful and democratic means,” Johnson said on Twitter. “His vision paved the way for the stability, positivity and dynamism of the Northern Ireland of today and his passing is a powerful reminder of how far Northern Ireland has come.”

Hume’s family said his funeral would be in keeping with strict guidelines on attendees because of the COVID-19 pandemic. A memorial will be arranged later.

“We are grateful for your condolences and support, and we appreciate that you will respect the family’s right to privacy at this time of great loss,” the family said in a statement. “It seems particularly apt for these strange and fearful days to remember the phrase that gave hope to John and so many of us through dark times: ‘We shall overcome.’”

Share on FacebookShare on TwitterShare on PinterestShare on EmailShare on LinkedIn
Investigation casts doubt on Iranian Covid death figuresPope Benedict XVI is ‘extremely frail,’ says German author after visiting him