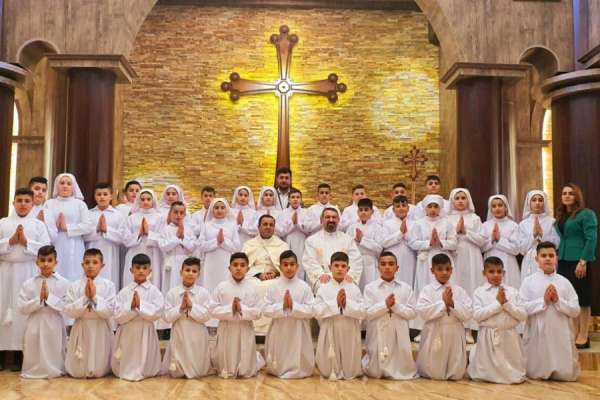 Rome Newsroom, Nov 24, 2020 / 01:00 pm (CNA).- Iraqi Christians are trying to face challenges with strength and hope as they continue to rebuild their lives after the Islamic State invaded in 2014, a Chaldean Catholic priest has said.

“It’s a difficult place, but we are living with hope, with faith, with love for everyone, even if they have done a lot of bad things,” Fr. Karam Shamasha told CNA via video call last week.

“As Christians, we try to not meet evil with evil. We try to calm things and to be really these seeds of life, seeds of peace, seeds of happiness, of serenity,” he added.

Shamasha is one of two priests serving at St. George Chaldean Catholic Church in Telskuf, a Christian village about 20 miles north of Mosul. Shamasha returned to Telskuf, his hometown, in August after six years studying in Rome.

The priest said that today there are around 900 families living in his village, most of whom returned in 2017, after the Islamic State lost control of Mosul. But many did not return, including his own family members. And around 200 of the families now in Telskuf are from neighboring villages.

In the past three years, the situation has been relatively stable and the houses in the village have mostly been rebuilt, he said. But many other challenges remain.

In addition to facing devastating economic problems, Iraqi people have been hurt emotionally, psychologically, and spiritually by the conflict, Shamasha said. “Unfortunately after ISIS everything has changed.”

“We are trying to heal this wound created by ISIS. Our families are strong; they have defended the faith. But they need someone who says, ‘You have done very well, but you must continue your mission.’”

He said: “It is not easy to return to how it was before… However, at least, today, we have again resumed Masses, youth activities.”

So far the area has not been gravely affected by COVID-19, with most cases of the virus consisting of mild symptoms only, he said, explaining that the parish has more activities planned once the situation improves.

In the meantime, the sacramental life of St. George’s continues: Shamasha noted that 15 couples married at the church last month and baptisms take place every Friday. On Nov. 13, 65 children received their First Holy Communion.

Shamasha said it is the mission of his church to heal families spiritually, so he and the pastor visited the family of each first communicant individually, congratulating them and praying with them in their homes. And “to say that the church is close to them.”

The Church is where people turn in their need, the priest said, noting that his parish did its best to support people in many different ways, including financially, medically, and with rebuilding.

“We are happy to be able to offer this possibility to our families. With all the difficulties, however, at least we are saying to everyone that the Church will not abandon … its mission as Mother,” he commented.

With the help of outside donors, St. George’s built a medical clinic in the town, which does not have a hospital nearby, and bought 30 oxygen tanks for people in the area to use for emergencies.

“Help on the part of the government almost doesn’t exist,” Shamasha lamented. “So we must, as the Church, knock at all the doors to try to find some help for our families.”

In nearby Mosul, the priest said that only around 50 to 60 Christian families have returned since its liberation from ISIS. According to Shamasha’s seminary classmate, who is now a priest in Mosul, these families are mostly made up of older adults or the elderly. Families with children have mostly settled abroad in countries like Australia or France, or are in another place waiting to move to a more stable country in the West.

As there are so few Christians, the community has just one Sunday Mass: Chaldean, Armenian, and Syriac Catholics all worship together in the Syriac Rite at a Syriac Catholic church.

The priest told Shamasha that “the beautiful thing is that there are not only Christians, but also every once in a while, you see some Muslims who come to pray in the church in front of the statue of Our Lady.”

Shamasha emphasized the importance of valuing life and said that Christians were trying to show to their Muslim brothers and sisters that “life is not something you can take from another. That God has given us life…”

He pointed to a mentality he saw demonstrated after the Oct. 29 attack in the Basilica of Notre-Dame de Nice, France, in which three people died after being stabbed by a Tunisian man who had illegally entered the country. The event was characterized as a terrorist attack.

But in some Arabic-language news commentary, Shamasha said, the attacker was called a “martyr.”

He explained that terrorist attacks in Europe were alarming for Christians in the Middle East, who ask themselves, “if things like this can happen in a country like France,” what will happen here? In France, Muslims “do not have power. We think: if they had a power like they have here, in Islamic countries, what will they do to Christians?”

“We have a mission in fact … I think both in the East and the West we have this mission, to show other religions not to be weak,” the priest said, noting that while he was living in Europe, he “saw a lot of weakness, many people do not know anything of Christ.”

He continued: “But we, as Christians, have an incredible strength, we have courage … we have a huge strength which comes from God, from God’s grace. Why must we be weak? We must show others that our faith is also right. To others, we are ‘infidels,’ but we must show by our life that we are not ‘infidels;’ we are more faithful than anyone else: in that God who is love, our God who does not kill, our God who wants man to live a good life, a life of peace.”

“So, we are not afraid,” he said. “We are strong; we defend our faith, whatever the result will be.”

He encouraged Christians in Europe not to be afraid to defend their faith and not to abandon the deep roots of Christianity in their history.

Share on FacebookShare on TwitterShare on PinterestShare on EmailShare on LinkedIn
Like Joe Biden, many Catholics find the rosary to be a comfort and anchor in crisisNew project brings psychological care to Rohingya refugee children