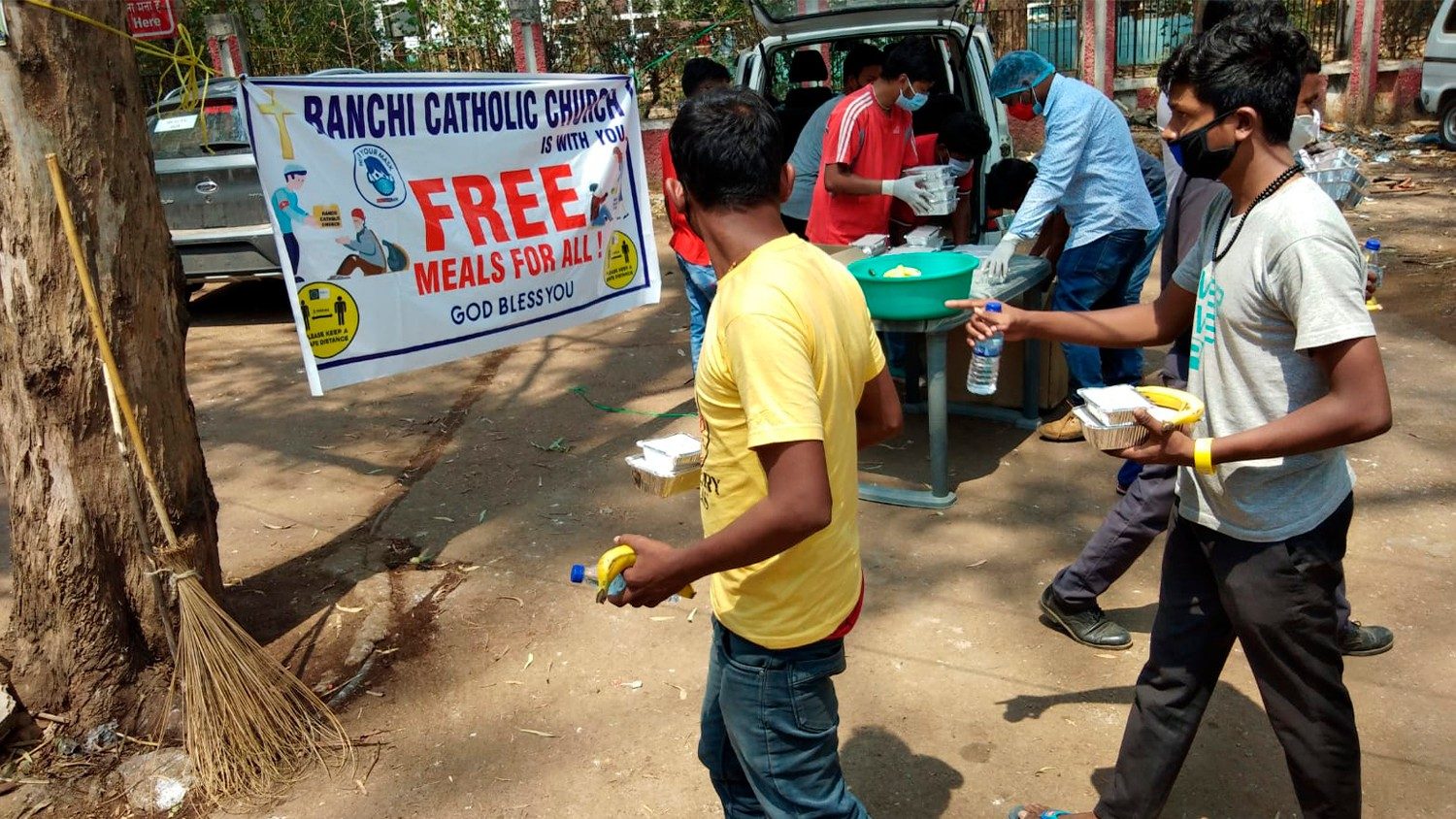 Many Catholic institutions in India have being making their facilities available in the nation’s battle against a devastating second wave of Covid-19 infections that is severely straining its healthcare system.

The Archdiocese of Ranchi, the capital of eastern India’s Jharkhand state, has thought of a new way to help ease the pain and suffering of Covid-19 patients and their families.  It has launched a free lunch service for the relatives of patients hospitalized in the Rajendra Institute of Medical Sciences (RIMS), the city’s biggest hospital.

The service is being organized on the grounds of the hospital by the Ranchi Catholic Youth led by its President Kuldip Tirkey.  A hot-packed lunch consisting of rice, lentils (dal), chicken and vegetables along with bottled water are being served to needy people.

Inaugurating the initiative, Archbishop Felix Toppo said, “Our Heavenly Father has been good to us and this goodness needs to be shared with the less fortunate, especially at this difficult moment.”  Auxiliary Bishop Theodore Mascarenhas noted the country was going through a very difficult time, with the pandemic showing no signs of abating.  While stressing the need to follow government rules of social distancing and public safety, he said the Church will continue to work for the poor.  “We are able to help the needy only because of the generosity of good people who are contributing,” he said.   “The Church will continue this service daily as long as it can as those attending the patients neither have the time nor resources to prepare a meal for themselves.”

The RIMS is a government hospital and is mostly frequented by the poor, as they cannot afford treatment at private hospitals. The lunch service is being carried out with every safety precaution.

Ranchi Church and the lockdown

A vast number of Jharkhand’s people are daily wage earners working in the richer states of India.  When the government of prime minister declared a sudden lockdown on March 25, these migrant workers were suddenly in the street without jobs, money or shelter and unable to return home.  Ranchi Archdiocese had appealed to other dioceses in other states not to abandon the migrants to their fate but to seek them out.

In Ranchi, the Catholic Church reached out to poor families with food rations and other necessities.  Cycle rickshaw pullers were particularly hit by the lockdown and the Church tried to help them out too.

India’s official count of Covid-19 cases surpassed 20 million Tuesday, nearly doubling in the past three months, while deaths officially have passed 220,000.  The country’s official average of newly confirmed cases per day has soared from over 65,000 on April 1 to about 370,000, and deaths per day have officially gone from over 300 to more than 3,000. The health ministry reported 357,229 new cases in the past 24 hours and 3,449 deaths.  The numbers appear staggering, but experts say the true figures are believed to be far higher, as many cases and deaths are not reported.

The media has been replete with images and videos of people dying outside overwhelmed hospitals and funeral pyres lighting up the night sky. Infections have surged in India since February in a disastrous turn blamed on more contagious variants of the virus as well as government decisions to allow massive crowds to gather for Hindu religious festivals and political rallies before state elections.  People are dying because of shortages of bottled oxygen and hospital beds.

Share on FacebookShare on TwitterShare on PinterestShare on EmailShare on LinkedIn
Shrines around the world link up for recitation of the RosaryFormer altar boy buys Akron church: ‘I’ll make sure it’s still taken care of’