Here are the top faith-filled moments from the Olympics

The games of the 32nd Olympiad closed on Sunday, bringing an end to more than two weeks of competitions featuring the world’s most talented athletes with a global audience.

Some competitors, however, made it clear that they were playing not only for national pride and a piece of hardware, but also for a greater purpose.

Here are some moments where athletes shared their faith on the world’s stage:

A Miraculous Medal for a miraculous victory

On the third day of the games, Filipina weightlifter Hidilyn Diaz won the first-ever Olympic gold medal for her country. Diaz, who competed in the women’s 55kg event, set an Olympic record with her clean and jerk of 127kg and a combined weight of 224kg. Her gold medal improved on her second-place finish at the 2016 games in Rio.

Images of Diaz’s visibly emotional face on her final lift went viral, and after she successfully completed the lift, she repeatedly said “Thank you, Lord” and clutched her Miraculous Medal necklace.

After the Philippine national anthem was played at the medal ceremony, Diaz stepped down from the podium, made the Sign of the Cross, and shouted “Mabuhay ang Pilipinas!” (“Long live the Philippines!”)

Glorifying God in the pool

That swim cap was on display during the qualifying rounds in the 100-meter breaststroke, as her country’s cap nearly fell off her head in both races.

Sydney McLaughlin wrote on her Instagram following her first gold medal win that she prayed “my journey may be a clear depiction of submission and obedience to God.” 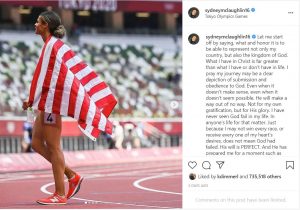 “​​I have never seen God fail in my life. In anyone’s life for that matter. Just because I may not win every race, or receive every one of my heart’s desires, does not mean God had failed. His will is PERFECT,” she said.

After winning her second gold medal – on her 22nd birthday – McLaughlin thanked God for another year of life, and wrote that she looks “forward to unveiling where it takes me as you continue to establish my steps.”

McLaughlin’s teammates are vocal about their faiths as well. Athing Mu, a 19-year-old breakout star of the games, posted that her year had been one of faith and perseverance.

“In the end, I chose to grasp onto God and allow Him to take complete control of my life. It allowed me to take a step back, learn how to trust Him entirely and HAVE FAITH,” she said.

After her second-place finish in the 400, Paulino told the Associated Press that she considered her medal a “miracle,” as she had only been running that distance for one year.

On her spikes, Paulino wrote “Dios es mi esperanza,” Spanish for “God is my hope.”

Marileidy Paulino of the Dominican Republic shows words written on one of her shoes which reads ‘God is my hope’ – Dios es mi esperenza- after winning silver in the women’s 400-m final at the Tokyo Olympics. pic.twitter.com/Fu1Vj6EF3z

Wrestler goes viral for praising the Lord and her country

Female wrestlers are not household names in the United States, but Tamyra Mensah-Stock’s interview after winning gold in the Women’s 68kg freestyle competition went viral.

“It’s by the grace of God I’m able to move my feet. I just leave it in His hands,” she said, adding that she prayed that all of her hard work would be worth it.

“And every single time it does, and I get better and better,” she said. “I’m excited to see what I have next.”

Nicola McDermott of Australia took the silver medal in women’s high jump competition, jumping a personal best 2.02 meters in the final. During each competition, McDermott not only wrote in her journal, but also wrote a devotional passage on her wrist.

For the final, McDermott wrote “JESUS makes all things new,” with a cross drawn underneath. She told Australian media following her medal win that ​​when she was a teenager, she was “always an outcast” before joining a church. 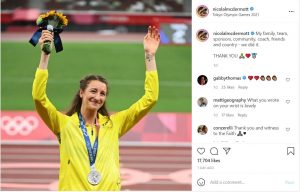 “I got welcomed into a faith community that loved me. I remember encountering God’s love and it changed the way that I thought of myself as a misfit,” she said.