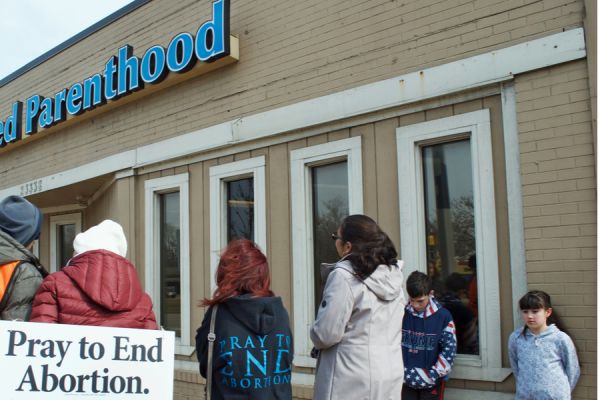 Denver Newsroom, Aug 28, 2020 / 01:00 pm (CNA).- After the arrest of a man who allegedly threatened pro-life demonstrators with a gun, pro-life advocates say the incident is not typical and will not change their determination to engage in positive outreach.

“Other than the occasional slurs and negativity offered by some people who drive past, we have a positive support from the community and we’ve never really had any bad incidents,” Donna Latteri, a local volunteer pro-life coordinator, told CNA. “We work very well with our police department and try not to give them a reason to come to the clinic.”

Protesters were on a public sidewalk when an argument took place between Aniska and the demonstrators, and a demonstrator called police when Aniska allegedly made a threat. Aniska was arrested on $26,000 bond, charged with aggressive menacing, terroristic threatening, and possession of a firearm during a felony.

According to Latteri, a group from a nearby church tried to speak with the man and the young woman “he brought for an abortion.”

“They always offer the Word of God and let them know they want to help,” she said. “Apparently Mr. Aniska did not appreciate it and showed them a gun he was carrying and made a threatening gesture and comment to the small group.”

The group’s organizer, the pastor of a non-Catholic church, “felt it necessary to seek protection from the police especially because they were minor children with them,” Latteri added.

“Given the atmosphere in America lately where life is not respected and tempers are short, we must carefully discern what is a real threat and take appropriate action to protect ourselves,” she said,voicing prayers for healing and peace for Aniska and the woman with him.

Moira Sheridan, president of Delaware Right to Life, also reacted to the incident.

“This is in no way a deterrent to the faithful pro-lifers who have sacrificed so much to be on the sidewalk to help mothers choose life for their babies and are offering help. They are here to pray with them and to offer life,” she told CNA.

Despite the man allegedly brandishing the gun and making threats, she said, pro-life advocates “responded with grace.” Sheridan, who spoke with a pro-life advocate involved in the incident, recounted his words: “We are not deterred, I am coming back.”

“That’s the nature of the people you’re dealing with out there on the sidewalk,” said Sheridan. “I call it ’holy boldness.’ Their main concern is the women and their babies.”

Delaware Right to Life’s first concern is the safety of those who do sidewalk counseling, she said. Her organization has been taking part in sidewalk advocacy “almost as long as we’ve been in existence, which is 47 years.”

Latteri hoped the incident would not keep pro-life advocates away, adding “we feel that is the goal of the evil one.” She said pro-life advocates “have been able to save babies and reach out to the broken hearts who just want someone to listen.”

“At times it has been an emotional ride but always an  opportunity to be the face of Jesus to a lost soul,” she said.

Latteri said pro-life advocates have a year-round presence at the Planned Parenthood clinic in peaceful demonstrations and advocacy for abortion alternatives.

“This is a group of individual sidewalk advocates who come on their own accord because they feel every child is a unique child of God and is wanted by somebody. We are from various churches and many have unique stories of how we have personally been impacted by abortion,” she said.

“We are out there because we are passionate about the pain abortion causes, not only to the child but also to the parents and the family members who will later find out,” Latteri told CNA.

The gun brandishing incident is not the first major crime this year at a Delaware Planned Parenthood.

In January, an 18-year-old was arrested on federal charges after throwing an incendiary device at a Planned Parenthood facility near the University of Delaware campus in Newark, Delaware, about 45 miles south of Dover. The device exploded but the fire died after about a minute. The man allegedly spray painted a Latin phrase meaning “God wills it.” He spray-painted the words “Deus Vult,” a Chi Rho, and a Marian symbol on the outside of the Planned Parenthood. The facility does not perform abortions, but refers for them.

Share on FacebookShare on TwitterShare on PinterestShare on EmailShare on LinkedIn
Whether Trump or Biden wins, the church will keep losing. Where does that leave Christian voters?Review: ‘Fatima’ scores a point for faith by exploring doubt