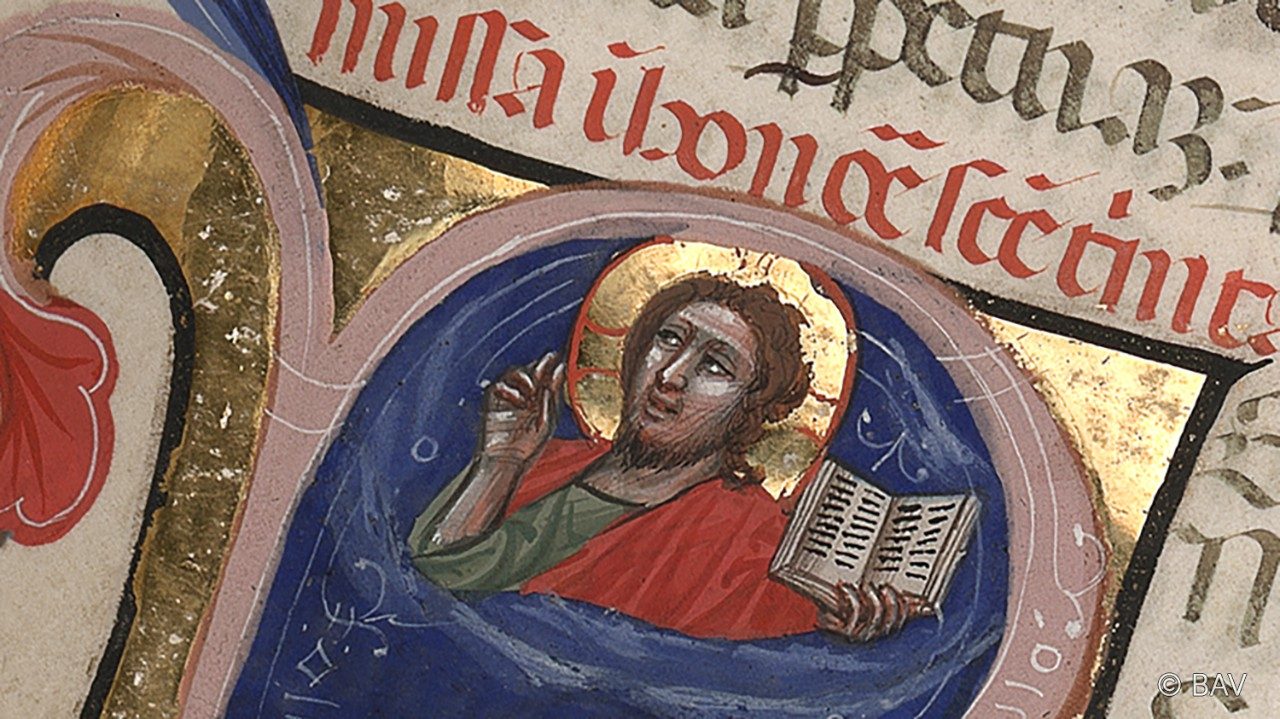 In this week’s edition of “Gospel Truth”, the late Jill Bevilacqua and Sean Patrick Lovett bring us reflections from the Gospel of St Matthew 27:11-54.

Jesus stood before the governor, Pontius Pilate, who questioned him,
“Are you the king of the Jews?”
Jesus said, “You say so.”
And when he was accused by the chief priests and elders,
he made no answer.
Then Pilate said to him,
“Do you not hear how many things they are testifying against you?”
But he did not answer him one word,
so that the governor was greatly amazed.

Now on the occasion of the feast
the governor was accustomed to release to the crowd
one prisoner whom they wished.
And at that time they had a notorious prisoner called Barabbas.
So when they had assembled, Pilate said to them,
“Which one do you want me to release to you,
Barabbas, or Jesus called Christ?”
For he knew that it was out of envy
that they had handed him over.
While he was still seated on the bench,
his wife sent him a message,
“Have nothing to do with that righteous man.
I suffered much in a dream today because of him.”
The chief priests and the elders persuaded the crowds
to ask for Barabbas but to destroy Jesus.
The governor said to them in reply,
“Which of the two do you want me to release to you?”
They answered, “Barabbas!”
Pilate said to them,
“Then what shall I do with Jesus called Christ?”
They all said,
“Let him be crucified!”
But he said,
“Why? What evil has he done?”
They only shouted the louder,
“Let him be crucified!”
When Pilate saw that he was not succeeding at all,
but that a riot was breaking out instead,
he took water and washed his hands in the sight of the crowd,
saying, “I am innocent of this man’s blood.
Look to it yourselves.”
And the whole people said in reply,
“His blood be upon us and upon our children.”
Then he released Barabbas to them,
but after he had Jesus scourged,
he handed him over to be crucified.

Then the soldiers of the governor took Jesus inside the praetorium
and gathered the whole cohort around him.
They stripped off his clothes
and threw a scarlet military cloak about him.
Weaving a crown out of thorns, they placed it on his head,
and a reed in his right hand.
And kneeling before him, they mocked him, saying,
“Hail, King of the Jews!”
They spat upon him and took the reed
and kept striking him on the head.
And when they had mocked him,
they stripped him of the cloak,
dressed him in his own clothes,
and led him off to crucify him.

As they were going out, they met a Cyrenian named Simon;
this man they pressed into service
to carry his cross.

And when they came to a place called Golgotha
— which means Place of the Skull —,
they gave Jesus wine to drink mixed with gall.
But when he had tasted it, he refused to drink.
After they had crucified him,
they divided his garments by casting lots;
then they sat down and kept watch over him there.
And they placed over his head the written charge against him:
This is Jesus, the King of the Jews.
Two revolutionaries were crucified with him,
one on his right and the other on his left.
Those passing by reviled him, shaking their heads and saying,
“You who would destroy the temple and rebuild it in three days,
save yourself, if you are the Son of God,
and come down from the cross!”
Likewise, the chief priests with the scribes and elders mocked him and said,
“He saved others; he cannot save himself.
So he is the king of Israel!
Let him come down from the cross now,
and we will believe in him.
He trusted in God;
let him deliver him now if he wants him.
For he said, ‘I am the Son of God.’”
The revolutionaries who were crucified with him
also kept abusing him in the same way.

From noon onward, darkness came over the whole land
until three in the afternoon.
And about three o’clock Jesus cried out in a loud voice,
“Eli, Eli, lema sabachthani?”
which means, “My God, my God, why have you forsaken me?”
Some of the bystanders who heard it said,
“This one is calling for Elijah.”
Immediately one of them ran to get a sponge;
he soaked it in wine, and putting it on a reed,
gave it to him to drink.
But the rest said,
‘Wait, let us see if Elijah comes to save him.”
But Jesus cried out again in a loud voice,
and gave up his spirit.

And behold, the veil of the sanctuary
was torn in two from top to bottom.
The earth quaked, rocks were split, tombs were opened,
and the bodies of many saints who had fallen asleep were raised.
And coming forth from their tombs after his resurrection,
they entered the holy city and appeared to many.
The centurion and the men with him who were keeping watch over Jesus
feared greatly when they saw the earthquake
and all that was happening, and they said,
“Truly, this was the Son of God!”